Zootopia – an animated film for children? 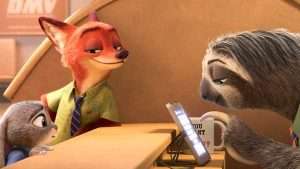 Walt Disney Animation Studios along with producer Clark Spencer and John Lasseter (Pixar producer famous for the Toy Story series, The Incredibles, and the Pixar Shorts) have teamed up for an animated tale of mystery featuring cute mammals that are just trying to get along. The story features Judy Hopps, voiced by Ginnifer Goodwin (Once Upon a Time, Walk the Line, Robot Chicken) a country rabbit, whose life-long dream is to be a police officer; a job traditionally reserved for large animals. Judy travels to the local metropolis, Zootopia, a political experiment where any mammal and can be anything, and enrolls in the police academy. Overcoming size and strength issues with her unique bunny talents, Judy graduates top of her class and is assigned parking ticket duty – a meter maid. There have been multiple mammal disappearances around the city lately and Officer Hopps soon becomes embroiled in the mystery of the disappearances when she gets the police chief to assign her one of the mammals to find and is given 48 hours to do it. Judy gets help from a sly fox, voiced by Jason Bateman (This is Where I Leave You, Arrested Development, Horrible Bosses) to track down her mammal, an otter, and solve the mystery of the disappearances.

Although a mystery story, the movie has an overarching theme of anti-bigotry. The fox, Nick Wilde, says to Judy early on, “The world is only going to see a fox as shifty and untrustworthy; what is the point of being anything else?” Nick learns to rise above the world’s image to become something extraordinary and respectable. Judy Hopps has a childlike view of the world, absent of any prejudice or bigotry, which influences people around her. It is repeatedly said that you can be and do whatever you want; that is, as long as it does no one else harm. The movie begins with an exposition on how mammals have overcome their savagery thousands of years ago to live in harmony today and the prey no longer have to fear the predators. For the bad guys, when you put your selfish motives above the good of society, you will fail and eventually get caught.

Zootopia is divided into several regions in which each region represents a temperate zone; the tundra, the rainforest, and such. We are introduced to these regions as Judy travels by monorail through each one to get to the academy and it feels like an introduction to a future ride in Disneyland. The amount of detail that goes into each one, including behind the scenes reveals of how special effects are made, is pretty incredible. For instance, we see the tree-branch sprinklers creating the rain effect in the rain forest, but from Judy’s perspective, it is just a soft drizzle in the forest.

Animated films have long been known as good, wholesome entertainment for children. With the Disney brand, you can generally trust it to be okay for the little ones without putting much thought or research into it. There is a recent trend to make animated films just as entertaining for the adults bring their children as it is for the youngsters themselves and this film is no exception. The Pixar brand has long been known to entertain adults with odd bits of humor and inside jokes. Zootopia may take this a little too far in the adult direction, however.

Judy’s investigation takes her to a nudist colony where we see unclothed animals sunning themselves, playing volleyball, and doing yoga. When Judy sees the first person, she exclaims, “You’re naked!” and covers her eyes. Throughout the scene, she is trying to avert her eyes. The animals are drawn Disney-style with no genitalia or other obvious physical characters identifying gender; however, the scene became uncomfortable to watch.

Another scene shows us the workings of a meth-lab. Oh, it’s not called meth in the movie, but there is no doubt this is a direct correlation to the popular TV series Breaking Bad. Two of the animals working the lab are referred to as Walter and Jesse; a direct reference to main characters from the show.

The disappearances of mammals are linked to predators “going savage” which creates several scary scenes drawn like an animated version of a horror movie. There is a jump out of your seat scene that caused at least one child in the auditorium to start crying and want to leave.

Zootopia is produced in part by John Lasseter. Lasseter formed Pixar and has created many wonderful films filled with fun imagery and dialogue that often refers to other movies and items only adults will catch on to. Zootopia, by comparison, is void of such things. There is a reference to Frozen when a weasel’s name is mispronounced as Weselton and of course the reference to Breaking Bad. It just wasn’t packed with the fun things that today’s audience has come to expect. There was a perfect opportunity during a dance number reminiscent of the Super Bowl Half-time Show, to show a tiger dancing out of sync with the others, but they did not take this opportunity. Perhaps it was because Shakira is providing the vocals and they did not want the character to remind people of Katy Perry, or perhaps not.

Zootopia is rated PG for thematic elements, rude humor, and action sequences. I would caution parents to consider whether children under seven or eight should see the movie. The message of prejudice is something all children should hear, but the vehicle may not be appropriate. One of the best take-away morals is buried near the middle of film, “The more we try to understand each other, the more exceptional we can be.” This statement was never really proved by the movie.

END_OF_DOCUMENT_TOKEN_TO_BE_REPLACED

Benefitting the county, schools, and much more By Don Ireland   This year marks the 30th anniversary of casinos opening in the former little mining towns of Black Hawk, Central City and Cripple Creek, Colorado. In those early years, smoking was allowed inside ... END_OF_DOCUMENT_TOKEN_TO_BE_REPLACED