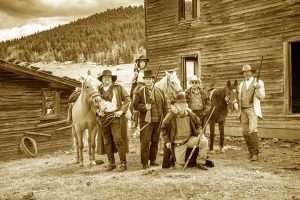 Mayor Heider led the Pledge of Allegiance and then asked for any amendments or additions to the evening’s agenda. An item was added for a presentation by Gilpin County Sheriff Bruce Hartman.

The Mayor called for a motion to approve the consent agenda which consisted of the minutes from the March 6 meeting and regular bill lists through March 14. Alderwoman Laratta moved to approve the Consent Agenda and was seconded by Alderman Aiken. The motion passed unanimously.

Mayor Heider opened the floor to the public for anyone who wished to speak to a topic on that night’s agenda that was not part of the Public Hearing for Ordinance 18-02. One person chose to address the Council.

David Josselyn brought up two items from the check register on the Consent Agenda that he wanted clarification. The first was a check for the payee Coors Brewing Company in the amount of $17,852.71 with the description “Water Leases.” Manager Miera replied that our water runs through areas owned by Coors Brewing Company and the U.S. Forest Service. This is a payment to lease the rights to that water for the City of Central. The bill lists cannot split up items from a single check and the dollar amount represents payments to both the US Forest Service and Coors. The second item Josselyn brought to Council’s attention was a check made out to F & H Auto Upholstery for $500 with the description “seat repair.” Director Hoover replied that that was for repair of two seats in their fleet vehicles.

Gilpin Sheriff Bruce Hartman presented to the City a framed map that shows the progression of Colorado counties from the original 17 to 64; the frame was made by Roy Blake, a Black Hawk resident who died in 2017. The map was discovered by Sheriff Chad Day of Yuma County and Sheriff Day made copies and distributed them to other Sheriffs across the state. The Council readily agreed to accept the gift.

Director Rears reviewed the second reading of Ordinance 18-02 which would conditionally approve a lease agreement with Denver Adventures, LLC. Denver Adventures that would build and maintain a zip line spanning Chase Gulch Reservoir along with a ropes course. Additional features include some trail creation, water craft, and a disc golf course. A deposit of $10,000 would be required incrementally over an 18-month period for returning the area to its original state if they end their operations, although the City would have the option to keep the infrastructure to be used in the same or other manner. Denver Adventures’ base of operations would be the top floor of the Visitor’s Center which has been used by Gilpin Arts for many years as an intimate gallery hosting rotating art shows.

Mayor Heider opened the public forum for this Ordinance and three people chose to address council.

Christopher Jackson, an attorney representing the interests of bondholders for the Central City Parkway, presented a statement from HWC Investors. Actions taken by the City in 2017 are believed to be detrimental to the bondholders’ stake by removing properties from the Business Improvement District (BID) boundaries. There are two additional items on this evening’s agenda that has bondholders concerned. They believe the City should be adding commercial properties into the BID whenever possible, but tonight, Denver Adventures is being considered under an agreement which they would be outside the BID; additionally, the KOA Campground, which is exempted from the BID, is proposing to purchase land which would effectively remove that land from the BID boundary.

Jeremy Fey, local resident and event promoter, next addressed the Council. He reminded them that he solicited Stefan Van der Steen of Denver Adventures, LLC, for the City to bring an adventure park to the area. The company will enhance recreational opportunities here and Jeremy will be actively involved. Jeremy met with Bill Porter, a bondholder, and told him that without these (recreational) possibilities, true commercial possibilities are limited.

David Josselyn then addressed the council as President of Gilpin Arts. He first stated his support of Denver Adventures saying it aligns with the Comprehensive Plan and what the public wanted for the direction of Central City. He then reminded the City that Gilpin Arts has been using this space at the City’s request for many years to hold rotating art shows. Josselyn hopes to develop a cooperative relationship with Denver Adventures so that the two entities can co-exist in the same space.

Alderwoman Voorhies moved to approve Ordinance 18-02 and was seconded by Alderwoman Laratta and Alderman Aiken simultaneously. The Ordinance passed unanimously.

Manager Miera introduced the first reading of Ordinance 18-03 which would conditionally authorize the sale and transfer of City owned property. Whispering Pines, LLC, doing business as Central City KOA, has submitted a request to purchase one and half acres of land owned by the City. The land is immediately south of their property and runs adjacent to Lake Gulch Road. Funds from the sale would go into the Public Property Trust Fund. This fund is used for purchases of property by the City.

Alderwoman Voorhies moved to approve the first reading of Ordinance 18-03 setting the second reading and public hearing for April 3, 2018, and was seconded by Alderwoman Laratta. The motion passed unanimously.

Director Rears introduced Resolution 18-08 which would approve a Memorandum of Agreement (MOU) with the Department of Labor and Employment Division of Oil and Public Safety (OPS) related to the regulation of conveyances. Conveyances, in this instance, refer to the elevators and escalators located in the City. The safety of conveyances is a state issue; however, local jurisdictions may opt to regulate themselves. When a local jurisdiction exercises this option, OPS must enter a MOU and determine if local jurisdiction is more or less stringent than the state standards. Central City has a current MOU with OPS that expires on June 30, 2018. This Resolution would start a new MOU with OPS and there is no material change from the prior agreement.

Manager Miera addressed the Council on the matter of the Wild Bunch Gang. The City Council had a public work session with the BID on Thursday, March 15, 2018, at 2:30 pm. During that discussion, the issue of the Wild Bunch Gang came up regarding their soot-out performances during alcohol related events; Stills in the Hills, and the Great Central City Beer Fest. Due to recent incidents involving shootings, the BID is concerned that the loud gunshots (blanks) may cause some patrons of their events to panic. Additionally, some casino owners have had complaints about the volume of the gunshots as they echo through the streets. The BID requested the Wild Bunch performances to not be scheduled during those two summer events. Discussion continued with options and compromises. The Council’s desire was to keep the Wild Bunch as part of the experience in the City. The Wild Bunch is not a legal entity of the City, and not a legal entity of themselves. The Wild Bunch operates under Gilpin History.

Mayor Heider stated that the work session was a posted public work session and it was a well-attended meeting.

Mary Bell commented that as a business owner, she enjoys the “quirky little show” of the Wild Bunch and asked “Where do we stand with the Wild Bunch now?” Manager Miera replied that the City will contact the Wild Bunch and discuss the concerns and if there are alternatives that would alleviate these concerns. If there is no compromise, then the City would not permit the Wild Bunch during those two dates. Alderwoman Laratta stated that “It seems that we need to decide where we stand on gun shooting.” Manager Miera responded that if Council wanted to take a stand on the issue, he recommended they have a work session where they could decide on a policy to give to Staff. Right now, Staff has no directing to deny or approve a permit based on gun policy.

Mayor Heider concluded “We like the Wild Bunch; they are actors; they are very intelligent, and perhaps they can change what they do.”

Alderwoman Voorhies reported that they are having an Easter Egg Dying event for kids on March 29th at 6:30 pm; and then their annual East Egg Hunt is March 31 in William C Russell Park at 11:00 am.

Alderwoman Laratta commented that she is heading to Cripple Creek and will attend their City Council meeting followed by gambling. She will report back what she learns.

Mayor Heider opened the floor to the public for anyone who wished to speak to the council on any items not on the agenda and six people chose to address council.

Michele Rouseau, local resident and Gallery Manager for Gilpin Arts, informed the council that it wasn’t the casinos that made her want to buy property and live up here, it was the rich history and the Wild Bunch Gang played a part in her decision. “The Wild West wasn’t won with sporks; guns are a part of history,” she said.

Deb Wray, President of the Gilpin Historical Society said, “I was hurt when I heard there was even a discussion about the Wild Bunch going away.” Guns are a part of history and we need to learn to respect the guns. People from other countries come here and say it’s nice to see what history was about. “Thank you for letting me bitch,” she concluded.

Jonas Shrock, Black Hawk resident and future member of the Wild Bunch Gang, next commented, “I am here to support the Wild Bunch.” Shrock returned from a visit to Tombstone, Arizona, and “they depend on their gunfights. I would like to see the Wild Bunch continue because they are a part of this community and part of history; it is entertainment and it’s educational.”

Stefan Van der Steen, representing Denver Adventures, thanked everybody for being open to having them as part of the community. “I appreciate the community being willing to bring history into their town.” Van der Steen also commented that he is willing to work with Gilpin Arts to continue having art in the Visitors Center.

Barbara Thielemann, resident of Central, gave the Council some good news. Her water froze and she tried to take care of it herself, but ended up calling Public Works. “Jack came over within an hour and half with his special heater. He found the source and got it taken care of quickly. I am really proud of our water department.”

Jeremy Fey next addressed the Council saying, “We are throwing a Jazz Festival on June 9. If there is loud music on one side and loud noises on the other side, I can see a situation where it could cause panic. As an event organizer, I would be fearful of what could happen.”

The Council adjourned the regular meeting at 8:27 pm. The next regular Council Meeting will be Tuesday, April 3.

END_OF_DOCUMENT_TOKEN_TO_BE_REPLACED

Benefitting the county, schools, and much more By Don Ireland   This year marks the 30th anniversary of casinos opening in the former little mining towns of Black Hawk, Central City and Cripple Creek, Colorado. In those early years, smoking was allowed inside ... END_OF_DOCUMENT_TOKEN_TO_BE_REPLACED

Benefitting the county, schools, and much more By Don Ireland   This year marks the 30th anniversary of casinos opening in the former little mining towns of Black Hawk, Central City and Cripple Creek, Colorado. In those early years, smoking was allowed inside ... END_OF_DOCUMENT_TOKEN_TO_BE_REPLACED