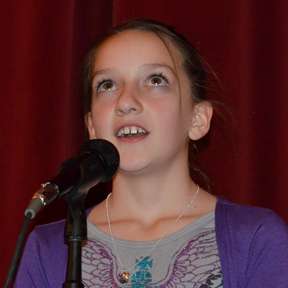 Congratulations are in order for fifth-grader Bailey Hobson-Kroll, winner of the 2013 Gilpin County Spelling Bee, held February 7.  Bailey won when she correctly spelled “comportment,” a noun meaning “bearing or demeanor.” She persevered through seven rounds to triumph over a field of about 60 intense competitors in fifth through eighth grade, winning the $150 first prize.

There were two other finalists, seventh-grader Carly Johnson and sixth-grader Olivia Randall. Carly, who earned second place, won $100, and the third-place winner, Olivia, won $50. Additionally, all students, including the three finalists, won one dollar for each correctly spelled word. The awards will be given at the academic awards banquet scheduled at the school in May.

Carol Murray, secondary school secretary, advised that this was the second year in a row that a fifth-grader had won the spelling bee. Had Bailey been in sixth, seventh, or eighth grade, she would have been eligible to advance to the state competition if she chose to do so, but fifth graders are only eligible to compete locally. The state spelling bee will be held March 15 and 16 at the Colorado Convention Center in Denver. The national spelling bee is scheduled for May 28 through 30 near Washington, DC.

The purpose for the spelling bee, as noted on the Scripps National Spelling Bee website, is to help students improve their spelling, increase their vocabulary, learn concepts, and develop correct English usage that will help them all their lives. A week or two before the spelling bee, students who chose to participate were provided with a Scripps list of words to study.

Secondary language arts instructor Jeff Scheussler was the pronouncer, or the one who gave the students the words. He began by explaining the rules to the contestants and instructed them to warm up with a practice round, where each contestant stepped up to the microphone one by one and spelled his or her name. That gave spelling bee officials a chance to make sure that the sound system worked well and that each contestant faced the judges and spoke loudly and clearly.

The judges were Interim Superintendent Morris Ververs, Deb Benitez, and Suzanne Paulman. Their role was to uphold the rules and determine whether or not words were spelled correctly. They had complete control of the competition and had the final decision on any questions.

Scheussler gave each contestant a different word. “Magnificent”…“monumental”…“superstar.” One after another, the competitors hoped to have those terms applied to them as they tackled tricky nouns, verbs, and adjectives.

The first round began with moderately difficult words, such as “wasp,” “cloudy,” “prove,” and “landmark.” Each contestant followed the procedure of pronouncing the word, spelling it, then pronouncing it again. Scheussler would tell the student whether the spelling was correct or incorrect. Those spelling incorrectly were disqualified. The others proceeded to the next round.

Round two words included some that occasioned a few giggles from the audience, such as “amigo,” “Martian,” and “snarky.” Contestants in the third round sweated through such posers as “ferocious,” “covetous,” and “reign.” There were eight students remaining at the beginning of round four. No one was “demonstrably” “flirtatious;” rather, they were “prominently” “intuitive” in their spelling. For the final three rounds, only three students were left. Bailey Hobson-Kroll, Olivia Randall, and Carly Johnson battled it out for the honor of spelling bee champ.

In the seventh and final round, Bailey correctly spelled the word “recyclable.” Olivia faltered on “subsequent,” and Carly was eliminated on “fallibility” (no, it doesn’t mean “able to fall”). Everyone held their breath while Bailey enunciated the letters of the anticipated championship word: “comportment.” The spelling was pronounced correct.

Then cheers erupted for the 2013 champion of the Gilpin County Spelling Bee!

The spelling bee was conducted according to Scripps’ Rules for Local Spelling Bees. Webster’s Third New International Dictionary was the final authority for the spelling of all words appearing on that list.

If a word had one or more homonyms, the pronouncer indicated which word was to be spelled by defining the word. A speller was allowed to ask the pronouncer to repeat a word, define it, give it in a sentence, tell what part of speech the word was, give its language of origin, or provide an alternate pronunciation. If it was apparent that a speller misunderstood a word, another word was given.

The spelling finalists followed a clearly defined procedure for the end of the bee. Only one finalist spelled her word correctly in the fifth round. She was then given the anticipated championship word, but misspelled it. A new one-word round began with all three girls, spelling in their original order. The same thing happened in the sixth round. Finally, in the seventh round, two finalists were eliminated and Bailey won as she correctly spelled the championship word.

Noah Webster, one of America’s founders and author in 1806 of the first truly American dictionary, urged altering many words to eliminate what he called “needless confusion,” such as changing “tongue” to “tung” and “women” to “wimmen.” Thomas Jefferson, Mark Twain, and others opined, “Pity a man who can only spell a word one way.” Maybe we’ll have to take those thoughts into account for next year’s spelling bee.

END_OF_DOCUMENT_TOKEN_TO_BE_REPLACED

Benefitting the county, schools, and much more By Don Ireland   This year marks the 30th anniversary of casinos opening in the former little mining towns of Black Hawk, Central City and Cripple Creek, Colorado. In those early years, smoking was allowed inside ... END_OF_DOCUMENT_TOKEN_TO_BE_REPLACED

Where the dead get to tell their story By Jaclyn Schrock On Saturday, August 21, the Gilpin Historical Society held their annual Cemetery Crawl. Tickets allowed the shuttle of hundreds of guests from the Teller House parking lot to the Cemetery. Depending on v... END_OF_DOCUMENT_TOKEN_TO_BE_REPLACED