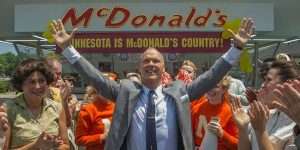 A big-screen biography opened recently called “The Founder” which tells the story of how Ray Kroc went from a Willy Loman type salesman to head of The McDonald’s Corporation. Well, that might be what the story is, but the plot is really about the two McDonald brothers whose innovative ideas were hijacked by a huckster and how they lost all rights to a billion dollar franchise. This is a story of greed and getting ahead regardless of who you hurt along the way.

The film starts with Ray Kroc, played by Michael Keaton (Birdman, Spider-Man: Homecoming), unsuccessfully selling store-to-store in his home state of Indiana a milkshake mixer with multiple agitators to make five milkshakes at a time. His pitch boiled down to supply leads to demand so the ability to make more shakes will increase sales. Checking in with the office he discovers what he believes to be a mistake – an order for six of his mixers for just one store. Ray calls the store directly to apologize for the accounting error and was told by Dick McDonald, played by Nick Offerman (Parks and Rec, Fargo), that there was an error and to increase the order to eight. Intrigued, Kroc followed Route 66 to San Bernardino, California to visit this store in person. What he saw there was an innovative and successful restaurant with the potential to sweep the nation. The McDonald brothers had tried to franchise their idea previously, but found it too challenging to keep tabs on quality control and menu consistency. Kroc entered a contract with Mac (Maurice), played by John Carroll Lynch (Shutter island, Gran Torino), and Dick (Richard) McDonald to franchise the McDonald’s concept and took that idea back to Indiana. Caught up in his latest sure thing, Kroc damages the relationships he has with his friends and his wife.

If Michael Keaton is not nominated for an Academy Award for this, he should be. He can communicate what he is thinking with just the movement of his eyes. The one moment of regret is so briefly and subtly registered on his face and yet, you have no doubt what is going through his mind at the moment.

So very different from the usual cookie cutter formulas, this movie is a breath of fresh air. Biographies are usually different by nature and can be very educational without being entertaining, but The Founder manages to be both. It was very insightful to see the dichotomy of the McDonald’s and Kroc’s business philosophies and how they worked together and then opened an opportunity for an ethically-void man to take advantage of the situation.

Character development was very good. Mr. Kroc was not portrayed to be the same uncaring individual at the beginning as he was by the end. He starts off a likable underdog just trying to take care of his wife and give her the lifestyle she deserves. The fame and greed of success eat away and he slowly changes into the ruthless man of history we know.

Nick Offerman, sans mustache, approaches Dick McDonald with a similar pattern to the conservative manly-man he is known for in other roles. Maybe he is a one-note actor, but I still very much enjoy his one-note.

The historical touches from vehicles to wide open spaces were nice to see; a reminder of a slower-paced time in the United States. The producers had to build each McDonald’s store for the movie as the only existing ones left were not reflective of the original locations.

I’m sorry, Linda Cardellini, (Scooby-Doo, Freaks and Geeks), but Keaton acts circles around you. Cardellini pretty much phoned it in and failed to produce much sympathy or empathy in the face of neglect.

A little nit-picky, but the yellow-painted lines on the highways did not exist in the 50s, at least not in the West.

There were a couple of times the pacing of the film was a little slow. It was fine for a first viewing, but it will be more obviously cumbersome on repeated showings.

The Founder is a very good film shedding light on how McDonald’s climbed from a single store to a multi-billion dollar franchise around the world. It has a nice balance between the concern for making an excellent product to feed as many people as possible and making money at the cost of quality and ethics. I felt like I should have snuck in a Big Mac into the theater as an appropriate movie-time food, but by the end, I would have been embarrassed by it. A story that takes your mind on that kind of journey is crafted well. I rate the movie four and a half out of five agitators.

END_OF_DOCUMENT_TOKEN_TO_BE_REPLACED

Benefitting the county, schools, and much more By Don Ireland   This year marks the 30th anniversary of casinos opening in the former little mining towns of Black Hawk, Central City and Cripple Creek, Colorado. In those early years, smoking was allowed inside ... END_OF_DOCUMENT_TOKEN_TO_BE_REPLACED