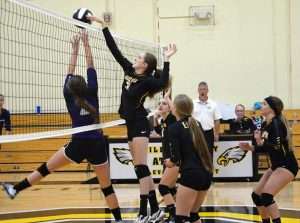 The Gilpin High School Eagle teams had a winning time last week as the varsity volleyball players flew past three adversaries, two of them also Eagles teams, and the Gilpin football team won over Plateau Valley in overtime play.

Gridlock on the Gridiron

The Eagles football players claimed a 28-20 overtime victory over the Cowboys of Plateau Valley (Collbran) in away league action on Saturday, October 1. The Eagles are now 3-2 for the season, 1-0 in league games.

Gilpin scored a TD in each of the first two quarters. Their opponents were fortunate enough to run into the end zone once per quarter and also kick the extra point after. The score stood at 14-12 Platte Valley at the half.

The Eagles came back in the third quarter to run in a touchdown and make good on a 2-point conversion, bringing the score to 20-14 Gilpin. The Cowboys answered with a TD in the final quarter to tie the tally at 20-20, necessitating an overtime period.

Eagles’ fans screamed their team to another 8 points, and Gilpin broke the gridlock to win 28-20.

Manny Gomez was the Player of the Game, with 11 total tackles, 1 hurry, 2 fumbles caused, 2 fumbles recovered, and 1 defensive scoop-and-score. Matthew Immordino also stood out with a 13-yard interception.

The Eagles had a total of 62 tackles, including 48 solo tackles. Braedyn Perez hustled with 8 solo tackles; Eryk Lorenz, Josh Trujillo, Immordino, and Gomez each had 7 solo tackles. Austin Boulter led in assisted tackles with 5.

Jaime Alexander and Immordino each got 1 sack on the quarterback. Gomez and Trujillo each recovered 2 fumbles, Gomez for 29 yards. Boulter blocked 1 field goal.

Following three wins last week, Head Coach Alexis Donaldson noted, “The girls are working extremely hard and having a lot of success. We are a young team and will continue to grow. We look forward to continuing on with a successful season.”

Alex Martin led with 18 kills; the team had 39 total kills, compared with RML’s 44. Three Gilpin players achieved 2 serving aces each: Martin, Jessica Wilhelm, and Bailey Hobson-Kroll. Gilpin soared past RML in digs, 117 to 77. Aspen Nadeau had the most digs with 26.

The next night, the Eagles met Twin Peaks Charter Academy (TPCA) in Longmont and defeated the Timberwolves 3-0 in a league contest. TCPA has struggled this year and has only a 1-8 record, 1-4 in league play. The Lady Eagles possess a 3-2 season record for league action. Set scores were 25/9, 25/14, and 25/22.

Gilpin boasted 31 kills, 14 by Martin and 9 by Wilhelm. The team had 13 serving aces, led by Lepro with 5. Martin achieved 10 of Gilpin’s 31 digs. Lepro contributed 24 ball handling assists. Nadeau received the ball 16 times of 31 total for the team.

Gilpin met another Eagles team on Saturday, October 1, in away non-conference play at Deer Trail, winning 3-0. Set scores were 25/13, 27/25, and 25/11. Martin and Wilhelm led once again with 13 and 10 kills, respectively. Nadeau was first in digs with 15, Lepro in ball handling assists with 29, and Nadeau and Martin in serves received with 12 each.

END_OF_DOCUMENT_TOKEN_TO_BE_REPLACED

Benefitting the county, schools, and much more By Don Ireland   This year marks the 30th anniversary of casinos opening in the former little mining towns of Black Hawk, Central City and Cripple Creek, Colorado. In those early years, smoking was allowed inside ... END_OF_DOCUMENT_TOKEN_TO_BE_REPLACED