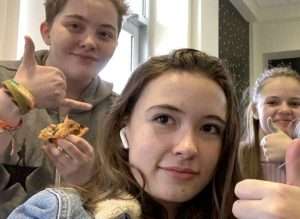 Last Thursday, January 30th, Amnesty International Gilpin Chapter held a Write for Rights event: a letter-writing campaign aimed at freeing imprisoned or mistreated human rights defenders. The event started at 3 pm, and students rushed in from study hall and elective classes. Tables were neatly organized with descriptions of each mistreated or imprisoned person. There were 10 cases total, each about young people who need help.

The most popular case was that of Yasaman Aryani, a young girl arrested for taking off her headscarf and passing out flowers on a train on International Women’s Day 2019 in Iran. Some people signed pre-written letters on her behalf, while others crafted their own from scratch. In Iran, it’s a crime for women to appear in public with their hair uncovered. Yasaman, a 24-year-old activist, wanted to change this. She’s been sentenced to 16 years in prison for campaigning against forced veiling.

In the end, Gilpin high school and middle school students wrote 77 letters! They will be sent to their respective countries and seen by government leaders. The goal is to flood officials with letters in order to create awareness of each case and hopefully change the victim’s situation. In the past Write for Rights has been successful, so we will see what comes of it this year. One thing is for sure – Gilpin Amnesty will host this event next year and keep the world-changing momentum going.

END_OF_DOCUMENT_TOKEN_TO_BE_REPLACED

Where the dead get to tell their story By Jaclyn Schrock On Saturday, August 21, the Gilpin Historical Society held their annual Cemetery Crawl. Tickets allowed the shuttle of hundreds of guests from the Teller House parking lot to the Cemetery. Depending on v... END_OF_DOCUMENT_TOKEN_TO_BE_REPLACED