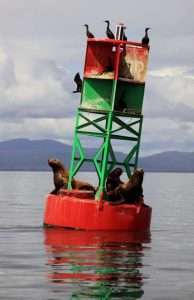 Away from it all, Wrangell, Alaska is a sleepy hamlet where a person can find adventure and relaxation. Originally Tlingit territory, it was named after Russian seafarer Baron Ferdinand von Wrangel. A stockade was built there by the Russians to fend-off Canadian fur traders. It later came under British and then American control. Home to 2,400 residents today, it is typical of small towns in southeast Alaska exhibiting working-class sensibilities yet maintaining a laidback character. Before or after bear viewing, glacier tours, or river excursions, it is easy to unwind in Wrangell whether watching eagles and herons at the City Dock or strolling through the marina where fishermen go about their daily routine. Dining ocean-side on fresh seafood at the Stikine Inn is a rewarding end to any day.

Everything is within easy walking distance in Wrangell. Petroglyph Beach was designated a State Historical Park fifteen years ago and is only a mile from the center of town. With specimens thought to be a thousand years old, over forty petroglyphs of spirals, birds, and faces are interspersed amongst the boulders. Some are easily spotted while others are faint and take a bit more effort to locate, even during low tide. The rocky rendition of an orca is artfully fashioned and is its crown jewel. The wrecked fishing vessel Carrie Arlene lies beached and salmonberries growing at the base of the observation platform make for a tasty snack after petroglyph hunting.

Accessed by a pedestrian bridge, Chief Shakes Island Tribal House has on display fine examples of native carving and iconography. A few blocks away, you can visit chief Shakes’ final resting place. A weathered fence that girds the grave is topped with killer whale totems at its corners that watch over him. Kiksadi Totem Park, in the middle of Wrangell, is also well worth a visit.

If you are in the mood for souvenir shopping, perhaps an Alaskan garnet strikes your fancy. Mined by hand from nearby Garnet Ledge, the sales rights to the semiprecious stones are deeded to local children. Many of the kids have traded-in paper routes or landscaping jobs for mining and can earn $1,000 in a summer. If you’d like to uncover some of the translucent purple gems on your own, you may purchase a $10 daily permit at the Wrangell Museum. That fee, and a portion of your take, is donated to the Boy Scouts.

One of my favorite ways to relax is fishing whenever a promising scenario presents itself. Marlin Benedict is the best guide in the area and sure to put you on your quarry. We began by pulling aboard an appallingly ugly two pound sculpin, which I’d never heard of or seen in any restaurants or grocery stores. Not being our fish of choice, we redirected our efforts that resulted in five or six Pacific cod and a couple of thirty-five pound halibut. The charter ended up being as much wildlife-watching tour as fishing trip. Sitka deer grazed by the shore and sea otters dove when we approached. Humpback whales breached in the distance with water trickling down off their exposed flukes. Sea lions sunned themselves while stretched out on channel markers. The highlight was undoubtedly tailing a pod of orcas and trying to predict where they would pop up next.

For lodging: The Stikine Inn at StikineInn.com or 888-874-3388 is on the waterfront and in the heart of the action. Alaskan Sourdough Lodge 800-874-3613 is quiet and frequented by hummingbirds. Their hearty home-style meals are delicious and a bargain. Several bed and breakfasts are also available.

END_OF_DOCUMENT_TOKEN_TO_BE_REPLACED

Where the dead get to tell their story By Jaclyn Schrock On Saturday, August 21, the Gilpin Historical Society held their annual Cemetery Crawl. Tickets allowed the shuttle of hundreds of guests from the Teller House parking lot to the Cemetery. Depending on v... END_OF_DOCUMENT_TOKEN_TO_BE_REPLACED