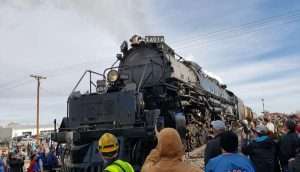 Colorado steam enthusiasts were excited to welcome Union Pacific’s Big Boy No. 4015 in the Great Race of the Southwest, commemorating 150 year of the transcontinental railroad, historically celebrated since May 10, 1869. Strasburg, CO is the location of the completion of the 3,000 miles of seamless coast to coast rail travel in 1870. This is in addition to the festivities claiming the connection only from Sacramento to Omaha, not coast to coast.

On Sunday, November 24, crowds of people were dwarfed by the huge 17 feet tall, 133 foot long, Big Boy No. 4014 steam locomotive that made a whistle stop in Strasburg, Colorado. It had only one more day to finish the third leg of the Great Race Across America celebrating the 150th anniversary of the completion of the Transcontinental Railroad. This leg was the Great Race Across the Southwest which took place from September 27 – Nov 26, 2019 and made a large loop beginning and ending in Cheyenne, Wyo.

Restored steam locomotives honor the May 10th, 1869 last spike being driven into the rails connecting the Central Pacific Railroad and the Union Pacific Railroad in Promontory, Utah. Both companies were commissioned to complete the transcontinental rail line made possible with government bonds and land grants by the Pacific Railroad Act of 1862, signed by President Abraham Lincoln. 150 years later, old Union Pacific steam engines have been revived. Steam whistles and chugging smoke from oil burners rather than the original coal drive massive wheels on steel rails.

25 Big Boy coal burning steam engines were built by American Locomotive Company in Schenectady NY, 1941-44. Big Boys are the largest steam engine built in the USA. Their massive size was to facilitate freight transportation on steep grades of curving tracks in mountainous regions, like the Wasatch Range in Utah and Idaho. Big Boy locomotives have a four-cylinder simple articulated 4-8-8-4 drive system. With its 113 foot locomotive length, it was hinged between the locomotive boiler and its water and coal storage.

American Locomotive Company delivered Big Boy engine No.  69585 to Union Pacific (UP) December 1941.  UP designated it as No. 4014. Big Boy 4014 ran most of its 1,031,20 miles between Cheyenne, Wyoming and Ogden, Utah moving massive amounts of freight along steep grades and mountain curves.

After 20 years of service, the locomotive was retired on December 1961, to Rail Giants Museum in Pomona, California. Union Pacific Railroad reacquired No. 4014 in 2013.

Some part were fabricated, others repaired. The driving wheels were sent to Strasburg Rail Road in Pennsylvania. The main change was to convert 4014 from coal burning to No. 5 fuel oil. Lessons were learned from Big Boy No. 4005 that was converted to oil in 1946, but got too hot, so was returned to coal burning in 1948. In February of 2019, No. 4014’s boiler passed its hydrostatic test.

On May 1, 2019 it moved for the first time on its own power in almost 60 years. It traveled around Cheyenne and into Nunn, Colorado.

There have been two engineers for the Great Races. Ed Dickens is the #1 engineer, and Ted Schulte is the #2 engineer. Curt is in training and can only act as engineer while one of the others is coaching. Paul Guercio of Rail Giant Museum has been with the Steam Team crew and on the trips in 2019 with the No. 4014. He says that the locomotive can be seen in Cheyenne Depot Museum when the schedule indicates viewing.

Mr. Guercio says that the Big Boy normally runs about 40 miles an hour. It only travels 200 miles a day. Fuel load allows 300 miles a day, but it’s best not to run out of fuel. It consumes an average of 20 gallons of oil to go one mile.

The No. 4014 holds 6,200 gallons of oil after its remodel, so refuels every evening. Originally it carried 28 tons of coal.

Originally, carrying 2,500 gallons of water, it would stop every 40 miles to take on more water. Now, it has two more yellow water tanks with each holding 2,800 gallons.

The train includes the Experience Union Pacific care with art and photos never before seen by the public. There is history and current hands-on experiences of the Union Pacific’s growth with the nation’s changes.

On May 3, 2019 Union Pacific’s Big Boy 4014 began its oil burning inaugural Great Race to Promontory. This began the first of three trips for UP’s Big Boy No. 4014, to include the Great Race of the Midwest and of the Southwest.

Promontory is where the Union Pacific’s Living Legend No. 844 faced off with Big Boy No. 4014 for the 2019 150th anniversary of the transcontinental railroad’s completion. This was Union Pacific’s re-enactment and celebration of the original meeting of steam locomotives at Promontory Summit in 1869.

Union Pacific received delivery of its last steam locomotive No. 844 in 1944, known as the Living Legend. No. 844 has been in continuous service ever since, often used for exhibition purposes after less use in the 1960’s. Being of the Northern engine series, the Living Legend is a high-speed passenger or freight locomotive having a 4-8-4 wheel arrangement. It has been used to pull trains on the Overland Limited, Los Angeles Limited, Portland Rose, and Challenger rail lines.

Uniting a Nation is the theme of the Gold Spike Historic Park, according the National Parks Service website. May 10th has an all-day re-enactment of the Central Pacific’s Jupiter and Union Pacific’s No. 119, using recreated engines from the original tapping in of the Gold Spike, or last spike which completed the two railroads joining. There are year round events at Promontory Point, with a museum and other festivities.

In 1853 the US Congress issued a request to survey five potential rail and telegraph routes to reach coast to coast, using the Mississippi as a north/south route. Rail companies would be compensated with land grants and government bonds to complete the transcontinental railroad and telegraph system. This survey request was to be filled by the War Department, under Secretary of War Jefferson Davis. In 1855, a twelve volume proposal of five potential routes could not be agreed upon in the US Congress.

It was not until the south seceded in 1861, that the remaining Republican dominated Congress was able to select a northern route to pass the Pacific Railroad Act 1862, signed by President Abraham Lincoln.

The historic gold stake was placed May 10th, 1869 to connect the 2,000 miles of track of two railroad lines racing to build track east from Sacramento, California and west from Omaha, Nebraska. The festive meeting was at Promontory Summit, Utah, 4,902 feet above sea level.

This is where the two railroad companies eventually met. They nearly missed each other, as their land grants did not line up to a coordinated meeting point originally. Today, Promontory Summit is the sight of Gold Spike National Historic Park, in northwestern Utah.

The Pacific Railroad Act of 1862 required the Central Pacific Railroad begin rail travel from Sacramento, California. Laborers were primarily from Asia. The only way to ship all materials and railroad building equipment was by water. Most supplies traveled around the Cape of Hope or through the Panama region, taking seven months, since no overland route existed to move the heavy supplies. Once on the West Coast, steam powered paddle boats brought supplies from the Pacific Ocean. The Central Pacific brought dignitaries and locomotive Jupiter to Promontory Summit in 1869.

Union Pacific laid their first rails July 10, 1865 in Omaha, Nebraska, west of the Missouri River. Their start was delayed by a lack of financial investments. With the Civil War ended, more funds, materials and veteran labor was available, including Irish immigrant labor. Rail traffic from the east came to Council Bluffs, Iowa. Supplies came on stage coach and ferry to cross the Missouri River to Omaha. Supplies also arrived coming up the Missouri River on steam powered paddle boats.  The Union Pacific brought dignitaries, the gold spike and engine No. 119.

END_OF_DOCUMENT_TOKEN_TO_BE_REPLACED

Benefitting the county, schools, and much more By Don Ireland   This year marks the 30th anniversary of casinos opening in the former little mining towns of Black Hawk, Central City and Cripple Creek, Colorado. In those early years, smoking was allowed inside ... END_OF_DOCUMENT_TOKEN_TO_BE_REPLACED