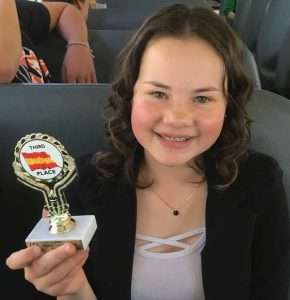 Did you remember to use another language besides English on Wednesday, April 18th, World Language Day? Gilpin County students surely practice this art. Our Gilpin County School was well represented, once again sponsored by Ms. Su Henry, in Greeley as Spanish speaking participants in this multi-language speaker’s competitions. Su Henry has been the Spanish teacher at Gilpin County School since 2009. 2018 is the 49th year University of Northern Colorado has hosted World Language Day with a variety of competitions in: Spanish, French, and German traditionally, yet also, now using Chinese, Japanese and ASL (American Sign Language). There are about 40 schools from Colorado and southern Wyoming who gather for the fun, and that equals approximately 1,000 students and teachers.

Gilpin Students who stepped up to the competencia included:

Spanish 1: Who Am I? 8th grader Haley Stundon gave a 1 minute speech about herself in Spanish and she won a third place trophy.

All the others did an excellent job! This is the list of Gilpin County School competitors in WLD:

Spanish 1 – Heritage Speaker: Who Am I?  Stephen King gave a 1 minute speech about himself in Spanish.

Gilpin students performed a 10-minute play in Spanish called Ñucu el gusano (Ñucu The Worm), a Pre-Colombian legend from the region of Bolivia about how a worm saves the people of the world and becomes the Milky Way.

Spanish 3: Chris Burtschi and Austin Boulter created and presented at competition an original skit of less than 5 minutes about “sticky football gloves” that can catch anything. (They don’t work – it’s pretty funny.)

Art Competition: Emma Hanssen painted a picture of a Spanish dancer that she entered in the competition.

Soccer competition: Dallas LeBeau was our one soccer participant. Each school is allowed to enter one soccer player.

Food Tasting: Destaney Garcia created a Hispanic dish, empanadas con manzanas (empanadas with apples) that she submitted for the judges. This was just a participation event. There were no awards.

END_OF_DOCUMENT_TOKEN_TO_BE_REPLACED

Benefitting the county, schools, and much more By Don Ireland   This year marks the 30th anniversary of casinos opening in the former little mining towns of Black Hawk, Central City and Cripple Creek, Colorado. In those early years, smoking was allowed inside ... END_OF_DOCUMENT_TOKEN_TO_BE_REPLACED