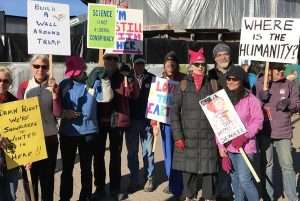 A couple dozen women and men from Gilpin County joined thousands of others in the 3rd annual Women’s March in Denver on Saturday, January 19. A full group photo of all the locals was impossible because people carpooled or rode public transportation arriving at different times and appearing and disappearing in the throngs.

The name changed this year to the Womxn’s March and planning included an emphasis on inclusion of all people. The 2019 theme was, “Listen to those who have been silenced. Unite under the banner of anti-oppression. Act with intention.”

Near the front of the march was a huge inflatable Statue of Liberty torch. Marchers of all ages were joined by participants in strollers, wheelchairs, and scooters. At various points along the route were women dressed as Suffragettes, drummers, bands of various sizes and instruments. Many carried handmade signs which indicated their focus for the march. There were old favorites like Build Bridges Not Walls, Climate Science is Real, This Is What Democracy Looks Like!, and Women Belong in the House and the Senate.

Signs that were more influenced by current events included Lock Him Up, Women Belong in Places Where Decisions are Being Made, Orange Lies Matter, Science Can’t Be Silent, They Wanted to Bury Us But They Didn’t Know We Were Seeds.

I decided to ask Gilpinites and others why they decided to give up their Saturday to drive to Denver to walk the march route. The answers were varied. Linza explained that she had been in D.C. for the first two annual marches, but wanted to be part of this community. Puja said, “I am here to support so many things! The planet, women, scientists, human rights, our immigrants, health care. This is the perfect storm.” Sandy is disgusted with the current administration’s treatment of people including women. Julia attended because it reminds her of what this country is about. This was Alyssa’s first march ever and she wants to start to turn anger into action. Karen said it was important because we are all equal. We are all one. Roxy is always succinct and to the point. When asked why she was there, she looked surprised and said, “Why wouldn’t you be?”

A large group of teens carried signs saying We VOTE NEXT! They said their participation was because it is important to stand up for what they believe in. One of the young girls carried a sign saying: Our rights aren’t up for “grabs.”

Men were marching too although in much smaller numbers. Some of their signs included, STRONG WOMEN: BE THEM, KNOW THEM, RAISE THEM and Men of Quality Don’t Fear Equality. Construction workers on the Denver Art Museum, waved, held fists in solidarity, and took photos.