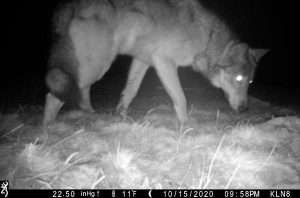 On November 3, Colorado voters passed Proposition #114 – The Restoration of Gray Wolves, a measure directing the Colorado Parks and Wildlife Commission to develop a plan to reintroduce gray wolves west of the Continental Divide. The passage of Proposition 114 has led to increased interest in wolves in Colorado, specifically, the wolf pack previously confirmed to be present in Moffat County.
The gray wolf remains under the management control of the U.S. Fish and Wildlife Service until at least January 4, 2021, when the proposed removal of Endangered Species Act (ESA) protections would take effect. At this time, CPW continues to monitor the area and take sighting reports and game camera images from citizens, sportspersons and others on the ground.
“The federal delisting discussion has caused some confusion in the state about the status of gray wolves in Colorado,” said Dan Prenzlow, director of Colorado Parks and Wildlife.  “Regardless of the USFWS listing status, gray wolves remain listed as a state endangered species, and killing a wolf in Colorado for any reason other than self-defense remains illegal.”
While protected under the ESA, killing a wolf in Colorado can result in federal charges, including a $100,000 fine and a year in prison, per offense. As the gray wolf remains a state endangered species, severe penalties will still apply when CPW regains management control in the state.
Wolves are elusive in nature, making visual confirmation more challenging than some other species. Despite this, game camera images, as well as tracks and fur, have been detected in the field throughout the summer and into November.
“As recently as last week we have confirmed the presence of wolves in Moffat County via pictures and recorded howling. Staff will continue monitoring the area as part of our overall wildlife management and conservation duties, and we will share information when we have updates or can help clear up any misunderstanding of wolf activity in Colorado,” said Prenzlow.
The public is urged to contact CPW immediately and fill out a report if they see or hear wolves or find evidence of any wolf activity in Colorado. The Wolf Sighting Form can be found on the CPW website.
At the November 19, 2020, Colorado Parks and Wildlife Commission meeting, the commission discussed their next steps in undertaking the planning efforts directed by Proposition 114. To stay updated on wolves in Colorado, visit the wolf management page of our website, or sign up for the CPW eNews newsletter.

END_OF_DOCUMENT_TOKEN_TO_BE_REPLACED

Benefitting the county, schools, and much more By Don Ireland   This year marks the 30th anniversary of casinos opening in the former little mining towns of Black Hawk, Central City and Cripple Creek, Colorado. In those early years, smoking was allowed inside ... END_OF_DOCUMENT_TOKEN_TO_BE_REPLACED