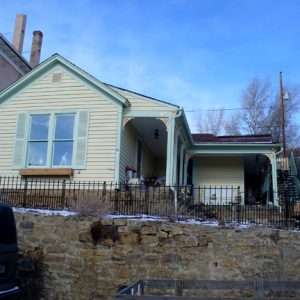 A “water thaw mishap” was the cause of an attic fire at the residence at 207 West First High Street in Central City on Monday morning, January 28, 2013. Central City Fire Chief Gary Allen said the thawing project had caused a problem with the wiring in the attic, and that had led to a fire in the insulation. A workman at the house spotted smoke coming from beneath the eaves shortly and called in the fire at 7:20 am. Central City Fire Department (CCFD) soon had seven firefighters on the scene. As a precaution, Allen said he called Black Hawk Fire Department (BHFD), “just in case the fire “popped,” but he soon released BHFD, after assessing the situation. The home is owned by Randolph Cox and Carmel Lubeck.

Other than some water damage – “We used only about 300 gallons,” Allen noted – the home remained in good enough condition that he expected the occupant to have full use of the living space in short order, “Once an electrician fixes the wiring,” he added. The blown-in insulation, a bane to the firefighters, will have to be replaced. While the insulation served its purpose in keeping the home warm, it also hid the location of the fire. Allen compared it to a duff fire (the highly combustible dried leaves and other dry, fine vegetative matter that settles into gutters or other little disturbed areas). Firefighters were forced to remove all of the insulation in order to find the fire and extinguish it. Firefighters cleared the scene around 11 a.m.