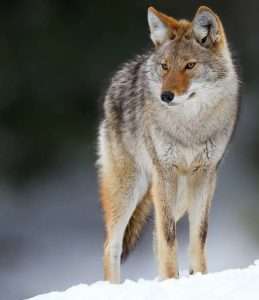 Living with one of the smartest animals on earth

Perhaps no other wild animal has en​dured the wrath of humans while evoking such genui​ne heartfelt admiration quite like the coy​ote. Some people curse their existence; Native Americans consider them to be the smartest animal on earth, calling them “God’s dog,” and many urbanites revel in opportunities to see and hear these vocal predators.

The coyote’s success is attributed to the coyote’s own ability to adapt. Coyotes have adjusted very well to human-disturbed environments, and now thrive in close proximity to people.​​

Coyotes are opportunistic hunters. They prey on small mammals, domestic pets, livestock, and domestic fowl but will also ​readily eat carrion and plants. A coyote will adjust its diet depending on the food that is available. In Colorado, coyotes are classified as a game species and may be taken year-round with either a small game or a furbearer license. Landowners may kill coyotes without a license on their land if the coyotes threaten their property or livestock.

Humans can coexist with coyotes. All Front Range communities are home to coyotes!   Coyotes in populated areas are less fearful of people. They have been known to attack pets and approach people too closely.

Whether you’ve seen them in cartoons or in your backyard, you’re probably familiar with coyotes. They are one of the most successful and widespread predators in North America, with a range stretching from southern Mexico to Alaska. And even if you’ve never seen one in person, you may have heard their famous howls when they’re hunting after dark.

Coyotes have been depicted as bumbling, desperate, and deceptive—but they’re much more than the stereotypes suggest. The predatory mammals are also agile, smart, and equipped to adapt to environments humans are constantly changing. Here are some more facts about coyotes.

The coyote’s adaptable nature has allowed it to thrive in an era when many species have dwindled. It mainly eats small mammals like rodents and rabbits, but it has no trouble making a meal of fruit, grass, insects, carrion, or garbage when it has to. It’s also resourceful: The coyote can build a den from scratch, but it’s also been known to take over and enlarge burrows dug by smaller animals like badgers.

The coyote’s resourcefulness was first observed by Native Americans. Many tribes across the continent cast the coyote as a central character in their folktales and tell stories of his cunning and perseverance. Though he’s often characterized as a trickster, Coyote isn’t necessarily a villain. In some myths, Coyote’s ability to make the most of his circumstances and do whatever it takes to succeed is seen as a reflection of humankind’s own survival instincts.

While the howl is definitely the most recognizable sound they make, coyotes have a wide range of vocalizations in their arsenal. There’s a total of 11 distinct noises the animals use to communicate. Outside of howls used for long-range contact, sounds are either categorized as greetings (whines and yelps) or agnostic (warning barks and alarm vocalizations).

Coyotes are much less likely to hunt in packs than their larger wolf relatives. When going after small mammals, they usually prefer working solo. They make an exception when pursuing larger prey like deer; in such cases, several coyotes will get together and take turns chasing the deer until it gets too tired to run.

In his 1872 book Roughing It, Mark Twain recounts his time in the Wild West. He spends part of the book describing a coyote he saw in his travels, and his harsh depiction of the animal may have contributed to its unsavory reputation today. He characterizes it as a “long, slim, sick and sorry-looking skeleton” in one passage and later calls it “a living, breathing allegory of Want. He is always hungry … He is always poor, out of luck and friendless.” Chuck Jones, the animation director behind many Looney Tunes characters, said he used Twain’s writing as inspiration when creating Wile E. Coyote.

Wile E. Coyote isn’t the most accurate depiction of the species on television, but the cartoon does get one thing right: Coyotes do occasionally chase roadrunners in pursuit of a meal. But while the Looney Tunes roadrunner is the faster of the two, coyotes outpace the birds in real life. Roadrunners move at 15 to 20 mph, and coyotes can run twice as fast, reaching speeds up to 40 mph.

In addition to being fast runners, coyotes are also excellent jumpers. When jumping horizontally they can clear distances up to 13 feet. They can also jump high in the air, which is bad news for any pet owners hoping their backyard fence will keep their animals safe from the predators.

Coyotes are often portrayed as wandering through empty deserts, but it’s becoming more common to see them padding down busy urban streets. Cities are appealing habitats for coyotes: The young forests that grow around metro areas attract the same small animals the predators love to eat, and with fewer wolves around thanks to human development, coyotes can dominate new territory without competition. Many consider them a nuisance, but they aren’t going anywhere: When researchers from Utah State University surveyed 105 urban areas in America in 2016, they found that 96 of them have coyote populations.

Human development in North America has driven gray wolf populations toward extinction, but the species’s downfall has turned into a success story for coyotes. When many ecosystems lost their apex predators, coyotes stepped in to fill the role. Today they extend beyond their original range in the West all the way to the East Coast.

But coyotes in the east aren’t quite the same animals you’d see in the California desert. Genetic samples from eastern populations show that they have a mix of coyote, wolf, and dog genetic material, with the majority of their DNA coming from coyotes. Even after years of interbreeding, these eastern coyotes don’t constitute a new species—so “coywolves” aren’t really a thing.

As coyotes move into major cities, scientists are looking for new ways to study the species’s impact. One method involves collecting the poop they leave behind. By looking at coyote droppings, researchers can gain a better understanding of the animal’s diet in urban environments and even analyze its DNA. Coyote scat-collecting programs have been implemented in both New York City and Los Angeles.

END_OF_DOCUMENT_TOKEN_TO_BE_REPLACED

Benefitting the county, schools, and much more By Don Ireland   This year marks the 30th anniversary of casinos opening in the former little mining towns of Black Hawk, Central City and Cripple Creek, Colorado. In those early years, smoking was allowed inside ... END_OF_DOCUMENT_TOKEN_TO_BE_REPLACED