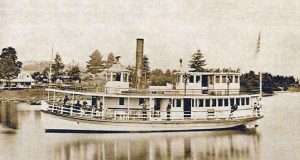 On July 4, 1872, William B. Walling launched a steamboat on the lake at the head of Lake Gulch, south of Central City (about where the Gold Mountain Village apartments are now). It was the first steamboat launched in Colorado. John Bennett claimed 155 acres of land around the lake in 1862 for ranching, but by 1864 he had branched out into the resort business. He built a dance hall at the lake that was known as the Lake House or the Lake View House, and it was a popular Fourth of July destination for Gilpinites. The first Fourth of July celebration at the lake was in 1864, and included dancing and boating on the lake. By 1866 the festivities had grown to include swings, shooting matches, balloon ascensions, and food stands, including one where Mr. Storer, the Central City auctioneer, sold peanuts and lemonade. Events in 1869 included a wrestling match and horse rides.

The highlight of the 1872 celebration was the steamboat, which was launched on the lake in the afternoon. The Daily Central City Register reported that it took a few hours to get the boat ready for passengers, but it finally took its maiden voyage at 5 p.m. The newspapers reported that as the boat “left its moorings, its decks were thronged with passengers, the whistle reverberated from mountain to mountain, and the beach was lined with spectators, men, women, and children, on horseback and in carriages and on foot.”

William B. Walling, the builder of the steamboat, was born in Vermont on January 3, 1835. He went to Kansas in the 1850s, where he met Louise Clough, the daughter of a Methodist minister. William and Louise were married in Kansas in 1857 and had two children, a baby who died at birth in 1858, and their son Frederick, in 1859. In 1860 the Wallings made their way to Colorado. William set up a sawmill near the Dory Ranch on the road to Boulder and was kept busy from the time he first started cutting boards. While in Colorado they had three more children, son Herbert and daughters Addie and May.

Walling’s sawmill burned down in 1864, but the Daily Mining Journal reported on March 19, 1864, that the boiler and engine were not destroyed in the blaze and his new sawmill was soon up and running again.

By 1865 he had gone into a partnership with H.L. Graham, and the mill was known as Walling and Graham. Things did not go smoothly between the two men though, and on September 6, 1865, they announced that they were dissolving their partnership.

What should have been a quiet end to their business turned deadly when Graham attacked Walling with a gun about two weeks later. According to witnesses, Graham approached Walling with a revolver, which he was known to carry, and the two men fought for control of the gun. Walling managed to get the gun, which was discharged in the fight, away from Graham, and struck him with it. The fight resumed and Graham got the gun back, firing it at Walling. Walling had managed to get a gun from one of the witnesses and fired at Graham. The fight continued and Walling shot Graham three times, the final shot being to the head.

Walling went on trial for the shooting soon after it happened, and he hired Henry and Willard Teller to defend him. It seemed to be a clear case of self-defense, and two witnesses testified that Graham always carried a gun with him. Walling was ultimately released and the case dismissed.

In 1870 Walling moved his sawmill to Caribou. He sold his wood at $25 to $30 per 1,000 feet, and his sawmill provided lumber for the Teller House and the St. James Methodist Church among other buildings in Central City and Black Hawk. He also kept livestock while living near Caribou, and the Daily Register Call reported that one of his cows ran away one day. When he finally caught up to her and tried to rope her, the cow managed to flip him over, breaking his leg in the process. He also had a house in Denver and bought and sold real estate there in addition to his other business ventures in the 1870s.

William and Louise Walling divorced on June 16, 1875, and two weeks later she married John C. Dunn in Denver (Louise died in Arizona in 1896). William never remarried. By the 1880s he had moved to Saguache County, where he continued to run a sawmill. The last time he visited Gilpin County was in September of 1901, when he spent a night in Central City. His son Fred visited in 1915, marveling at the changes that had taken place in Central City since he had arrived there as a child in 1860.

By 1910, William Walling had moved to Hawthorne, Nevada, where he did odd jobs. He died there from a cerebral hemorrhage on June 22, 1915, at the age of 80 and was buried in the Hawthorne Cemetery.

As for William Walling’s steamboat, it was a popular attraction on the lake for the summer of 1872, with ads in the Daily Register Call stating that it was always ready for passengers. At the end of the summer, though, the boat disappeared, followed by the Lake House at the end of the following summer.

END_OF_DOCUMENT_TOKEN_TO_BE_REPLACED

Where the dead get to tell their story By Jaclyn Schrock On Saturday, August 21, the Gilpin Historical Society held their annual Cemetery Crawl. Tickets allowed the shuttle of hundreds of guests from the Teller House parking lot to the Cemetery. Depending on v... END_OF_DOCUMENT_TOKEN_TO_BE_REPLACED

Where the dead get to tell their story By Jaclyn Schrock On Saturday, August 21, the Gilpin Historical Society held their annual Cemetery Crawl. Tickets allowed the shuttle of hundreds of guests from the Teller House parking lot to the Cemetery. Depending on v... END_OF_DOCUMENT_TOKEN_TO_BE_REPLACED