Will the Central City casinos get a device fee waiver? 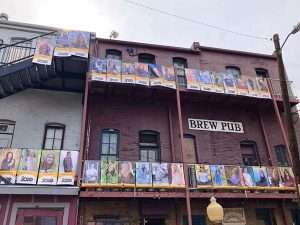 Council will meet with casino owners

Mayor Fey led the Pledge of Allegiance and then asked for any amendments or additions to the meeting agenda. There were no additions or amendments.

Council considered approval of the consent agenda consisting of the meeting minutes from the meeting on May 5, and the regular bill lists through April 29. Alderman Hidahl referred to a bill to Michow Cox and McAskin LLP in stating that the City Attorney works under the City Council and not the City Manager, so special billings should be approved separate from the consent agenda. Hidahl stated he did not want to change anything today, but wanted future consideration. Manager Miera responded that he could continue to code the bills to the appropriate budget line items. Hidahl also requested a change to the minutes adding a comment he made regarding the design guidelines. Alderwoman Laratta moved to approve the consent agenda and was seconded by Alderman Aiken. The motion passed unanimously.

Mayor Fey opened the floor to the public for anyone who wished to speak to a topic on the agenda.

Eric Rose, representing Century Casino, addressed the council regarding Resolution 20-19 (a Resolution to establish waivers, deferments and reductions to fees normally paid by gaming establishments) saying they received the document three hours prior to the meeting so they have not had a chance to review it thoroughly. (For reference, the meeting packet was posted to the public early on Monday, May 18, but information regarding Resolution 20-19 was not included.) Rose requested the item be postponed to the next meeting.

Executive Director of the Business Improvement District Joe Behm next addressed council stating they sent a collective email to the City regarding device fee waivers requesting a waiver for the balance of March, all of April, and all of May. He requested the City consider what Black Hawk and Cripple Creek have done and meet with them in the prior month to discuss the following month’s fees. He agreed with Eric Rose in requesting a postponement of the resolution, or to vote it down and go back to the drawing board.

Manager Miera introduced Resolution 20-18 which would extend the local Emergency Disaster Declaration through June 3, 2020. Continuing the declaration enables to City to utilize resources available during a disaster.

Mayor Fey stated the Governor enacted an executive order and he has not had a chance to read it, but knows it involves additional funds. Fey also said that as they start to reopen, is there a hypocrisy between telling people we are open and continuing a state of emergency? Manager Miera responded that their declaration does not add anything to what the State and County have in their declaration, and they “would still be subject to those orders whether or not they had a declaration of their own.”

Alderwoman Laratta moved to approve Resolution 20-18 and was seconded by Alderman Aiken. The Resolution passed unanimously.

Manager Miera introduced Resolution 20-19 which would establish an incentive program for Central City casinos for the City to waive or reduce certain fees.

Alderwoman Laratta commented that it looks like the casinos are being charged for the entirety of March, but she believes device fees should be waived for April and through whatever month they get to open. Also, she believes they need to sit down with business leaders and have this worked out to have an agreeable solution.

Alderman Aiken believes they should not act on the Resolution today and maybe a work session with the casinos would be the best action. “We need more input from the casino folks.”

Alderman Hidahl asked how this Resolution would affect the budget and if projections have been made assuming this Resolution passes? Manager Miera responded that this closely tracks with the May 1 consolidated fund and general budget. Without clarity of what exact device fees and number of devices will be operating after we open, it is difficult to have certainty in economic projections. Any costs to any relief program will come out of the City’s general fund balance. Hidahl stated that a lot has been said about what Black Hawk and Cripple Creek are doing. However, all three gaming communities are different. Different in economy, different in needs, and different in interpretation of State and Federal constitution. He also recommended the percentage of devices to maintain in operation be dropped from 95% to something like 80% as it may be difficult or not reasonable to maintain that many.

Alderwoman Johnson commented that one or both of us, the City and the casinos, is going to be in debt at the end of this. If we pass this, how are we going to meet our own needs and continue services? No one is waiving fees for the employees, their rent or mortgages. Everyone wants their money and employees must pay their bills. It’s confusing to me how we can waive the fees.

Alderwoman Laratta commented that she believes this Resolution came about as a reassurance to the casinos and to the residents. I think this needs a little more conversation, but I think everyone is just looking for assurance that we’ll be there for them.

Mayor Fey commented that casinos need to operate in an environment that’s sound and healthy and due to our dependency on the casino industry, these device fees are going toward City operations. “That being said, we want to do everything we can to maintain the casinos’ health.” I think it’s premature to vote on this and recommended tabling the Resolution. He also recommended scheduling a work session on the following Tuesday, May 26.

Alderwoman Laratta moved to continue Resolution 20-19 to the next regular meeting on June 2, 2020 and was seconded by Alderwoman Johnson. The motion passed unanimously.

Mayor Fey asked Council if they would comment on the safety of public restrooms for reopening during the pandemic. Buddy Schmalz of Dostal Casino contributed his testimony of how they are dealing with the issue of public restrooms every day multiple times per day. Dostal is open for food take-out only and they continually are turning people away seeking a restroom. He suggested that the City put up a port-a-potty and hanging a sign saying “’Use at your own risk.’ I would just appreciate if something could get done this weekend.” Alderwoman Johnson asked if the City could talk to Public Health and confirm what they can or cannot do.

Alderwoman Laratta commented that, “The flowers in the flowerpots hanging along the streets are beautiful.”

Mayor Fey reported that the wildflowers are out and would encourage everyone head out to the trails around town. “I took a lot of, not pride, but joy, walking down to the council chambers for this meeting.” He is optimistic about their future and is encouraged by the work the County Commissioners are doing to get help from the State.

Joe Behm once again addressed council saying, “Maybe a way to address the Resolution (20-19) in a more timely fashion” is to request that casino owners meet with City Staff this week. Behm believes a work session next Tuesday will be neither efficient nor wise.

Eric Rose once again addressed council saying, “I will be available to the City to discuss the fine points of the Resolution (20-19), and I agree with Joe that we can come together this week.” He also reported that the casino owners don’t believe any gaming communities will get a variance from the State, so the guidelines for reopening that the local casinos are working on together with the cities of Central and Black Hawk will be the template for all casinos.

Mayor Fey adjourned the regular meeting at 4:14 pm. The next regular Council Meeting will be Tuesday, June 2, 2020 via Zoom.