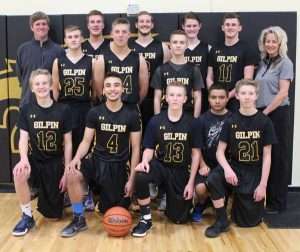 The Gilpin High School boys’ and girls’ varsity basketball teams visited the North Park (Walden) Wildcats last Thursday, November 30, playing well but taking narrow losses in both games. Stop by the Gilpin gym this Thursday night, December 7, when the Eagles host West Grand. Junior varsity starts at 4:00 p.m., and varsity action begins with the girls at 5:30 p.m. and the boys at 7:00 p.m.

“We have a great group of student athletes. I’m proud of the concentration, effort, and teamwork that they are demonstrating. This is going to be a fun season, and we are going to put ourselves in position to compete well and win ball games.”

North Park began its season with the Gilpin contest and on December 2 met Platte Canyon (Bailey), taking a 50-32 loss, and Skyview Academy (Highlands Ranch), winning 58-49 in these double-header games.

Gilpin struggled in the first half of the game against North Park, racking up 11 points to the Wildcats’ 22. The Eagles made a valiant comeback during the third quarter, shooting 15 points, while their opponents only put up 7. The two teams were even in the fourth quarter, scoring 15 points each.

Davis was the leading scorer for Gilpin with 12, followed by Wilhelm with 11. Lorenz contributed 9 points to the effort, and Immordino came in with 5. Davis plunked 2 three-point field goals, and Lorenz joined with 1. Team members also shot 10 two-pointers. Wilhelm was first in free throws with 3.

Lorenz was first in rebounds for the Eagles with 5 offensive and 5 defensive. Immordino followed with 3 offensive and 6 defensive. Lorenz contributed 3 assists. A trio of Wilhelm, Lorenz, and Davis had 4 steals each.

Wilhelm, Immordino, and Lindberg had blocking success with 1 each. Wilhelm managed 4 deflections, while Lorenz and Davis came in with 3 apiece.

The Eagles had 17 turnovers to the Wildcats’ 21, and 21 personal fouls to their opponents’ 11.

The Gilpin girls were denied their bid for victory in the away non-league test with North Park, suffering a 37-33 defeat. As in the boys’ game, the Eagles girls put up just 11 points in the first half but pushed back in the second half with a tally of 22. Their rivals managed 23 points during the first two quarters and had to be satisfied with just 14 more points in the game, to eke out a 4-point lead for the final result.

Wilhelm got off to a good start with 13 points for the Eagles; Lepro and A. Johnson followed with 7 and 5 points, respectively. Lepro, Armstrong, and A. Johnson each swished 1 three-point field goal. Gilpin got 11 two-pointers, 6 of which were contributed by Wilhelm. Warren and Wilhelm were both successful at the free throw line with 1 point each.

The Eagles landed 13 offensive and 20 defensive rebounds. Smith was tops in assists with 3, while teammates Lepro, Armstrong, and Adams came in with 2 each. Armstrong led in steals with 3; Nadeau, Warren, Lepro, Wilhelm, and Adams each had 2, and C. Johnson had 1. Wilhelm had 2 blocks and Smith 1. Armstrong and Adams contributed 4 deflections each.

Gilpin had 32 turnovers and 18 personal fouls.

There were no statistics available for North Park. The Wildcats trounced Platte Canyon 61-44 and led Skyview Academy 46-42 on December 2.