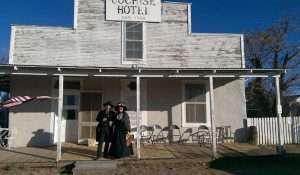 People want to experience what they see in the movies

Myths and legends of the Wild West are what people want to find these days when they visit older, historic communities. It is the notion of the “town too tough to die” as Tombstone is known to depend on that perseverance which thrives still today in spirited, but not completely abandoned mining communities.

I personally saw Paula Marks words as true, having just last month walked the wooden board sidewalks of Allen Street in Tombstone, Arizona. Tourists are easily spotted as they’re not dressed as the locals 1880’s clothing and most carrying unloaded guns, which must be checked when entering a saloon. The original ways are embellished in the restaurants, saloons, and theatricals along with shops all selling traditional items, such as a model train shop which is run by the pastor of the local cowboy church, and with museums complete with storytelling guides to see and hear the past as factual. The dirt street is closed off at times to horse and pedestrian traffic for skits and re-enactments that include brief gunfights at some point. The pavement is hidden in those four blocks covered with dirt. The dusty road clearly marked by wagon wheel trails show the route the frequent stage coaches travel, authentic to the original design. These coaches are for hire, driven by an artistically narrating cowboy steering a pair of horses. Electronically amplified clever words share the history of places the tourist see along the 20 minute ride through the historic district.

Cochise County, with Tombstone as the county seat while Arizona was a territory, remains the cattle capital of the state. The original tent and occasional adobe building town boomed with the discovery of silver and mining grew, although lumber was not to be found locally. Silver had been known to be in the southern Arizona and Sonoran Mexico area since the late 1600’s. After the Gadsden Purchase of 1853, prospectors moved into the area that had been Mexico, but was now the United States, or New Mexico Territory. Previously, prospecting in these parts was challenged by the Apache Wars, but now it was the US so our military offered some American support. 1873 is when silver was found, officially helping the town get started where previously land was considered only to produce a tombstone for those who went there. By 1881, Tombstone had a population of 4,000, recognized as the largest community between New Orleans and San Francisco. Lawlessness was prevalent, but only became clearly evident with the OK Corral shootout between the horse and cattle thieving cowboys with crooked lawmen and the upright law enforcement of the Earp brothers, Doc Holiday, and their supporters. Originally, it was the last frontier with the Cochise Stronghold and tiny communities that grew along the railroad route and ranch lands of the San Pedro River. The Cochise Hotel was founded by digging one of the only wells, so they were able to get the railroad to build tracks there to refill the steam locomotives with water when traveling through the desert. The Cochise Hotel has been revived as an Old West bed and breakfast, where we attended an 1880’s Gala in February, complete with four dealers for the original poker games of the day. Memorable was longtime Doc Holiday impersonator, demonstrating how Faro Poker dealers cheated to keep the house winning, as he did in Denver, while retelling the dentist life story originally from an affluent family in Georgia. The Old West has many ways of preserving the past to live in times that are so different from their founding.

Paula Mitchell Marks, in her book “And Die In The West,” telling more than the story of the OK Corral gun fight, gives perspective to the old west frontier communities, and Tombstone, Arizona in particular.

On page 423 speaking about Tombstone:

“The town’s citizens live daily with the myths, but we all live with the myths of the frontier West, many of which are grounded in historical reality. The West of the nineteenth century did offer great freedom and frequent opportunities to remake oneself. These opportunities were accompanied by very real dangers – from knowing whom to trust in a fluid society, to knowing how to set a black powder charge so that it didn’t blow one into the beyond. Men seized the opportunities and the dangers, often with explosive results.”

So, people who come to our historic Central City are coming to relive those myths and realities, seeking to experience the old frontier west they have come to know from countless stories in books and movies. It may not be entirely factual, but it is their escape from our ridged absolute law and order world of today. Guests in Central City may come to gamble, but they also come to find the freedom and experience briefly some of the dangers while considering heroes who conquered and those who failed.

Relieved by the end of the Civil War, history reminds us of the instability, greed and prejudices which motivated people to gather others in political ways for strength by unity, but also bringing much dissention as adventure left the known to seek the unknown in the western frontier lands. Sadly, the white man and military inexperienced with the open lands, proved his ways with mistreatment of native people. The adventure often included deprivation and hardships, simply dependent on a horse and a gun, a deck of cards, a pick, shovel and donkey, a Bible, a lawman’s badge or a bottle of alcohol. The legends of the west came in many forms and Coloradans today seek to find those legends in Central City, Black Hawk, and Cripple Creek, permitted to provide gambling to preserve the ways of historic towns abandoned when their mines were exhausted.

Historical groups all over our great land draw attention to our past to keep life in the community that does not keep up with the rush of today. It is anyone’s choice to compare or not – consider those images to how we have come to today’s world from the fears, dangers and sometimes corrupt ways of our history. Most rural and original communities of the west must thrive because they keep their history alive, be it accurate or not, as the rush of our world has abandoned their location to rot in dust without an industry.

Central City, Black Hawk, Leadville, Cripple Creek, Telluride, Trinadad and many other still small rural Colorado communities seek to celebrate their past in similar ways, yet still very unique ways influenced by each location. Even in the 1970’s many remember flocking to the natural life in the mountains of Central City to relive the old West, often to end up in jail, proving modern times had come and lawlessness was not tolerated. Central City keeps the images of the affluence of our mining town past with the Opera House, but no longer continues the annual season opening parade and celebration. Gilpin Historical Society provides much to be learned about the history of the area. Lou Bunch Day with the unique bed races and mock gunfights on Main Street is one of the few events in Central City that relies completely on the old days as motivation for the celebration. People coming to Central City and Black Hawk want to be able to gamble. But, they come here for the natural beauty of the mountains and historical preservation too, which other gambling communities cannot offer.

Guests and residents of Central City want to see and hear the history presented with real people demonstrating the old life as the Wild Bunch maintains traditions. Stories have long been told by real people, the most preferred way to enjoy a story. We all favor stories told in skits and reenactments that keep alive the dangers of mining, thrills of the trains, the challenges of the stage coach, communication, and newspapers dependent on the telegraph. Interesting too are the hardware store novelties and practical provisions, livery stables, hotels, the feasting following a cattle drive, goof-ups in poorly engineered buildings and fire danger as electricity began replacing fire light. On the entertainment front we see the saloons and cheating of greedy gamblers, and ladies with promiscuity moralized to make ends meet. Citizens held competitions with foot races and games, musical and dance entertainment, and even maintaining the lavish high society life of the theaters with the Opera. Central City holds a unique place in Colorado history, so it is our responsibility to keep that history alive.