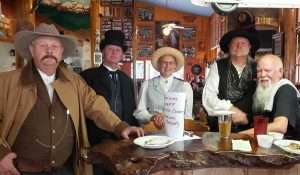 “Age of the Gunfighter” trip to Wichita fundraiser

The Gilpin Historical Society (GHS) and Central City’s Wild Bunch are blessed by the show of support demonstrated Saturday, August 10th at Roy’s Last Shot Restaurant in mid-Gilpin County. The generosity of Roy to prepare his restaurant with a tasty buffet and salad bar was commendable. The game room, pool tables and full service bar kept many locals happy.

The spittoon tip jar outside and the beverage pitcher the buffet table collected proceeds to go towards the Wild Bunch trip to Wichita, Kansas. The Wild Bunch is the only Colorado group invited to demonstrate their skills for the Age of the Gunfighter’s gathering in Cowtown, the end of September this year.

Roy’s Last Shot with amazing original art decor and plenty of unique shot glasses bring atmosphere to the spacious, but cozy table areas indoors and out. The buffet line was the busiest around noon, when extra waiter support came from Jack & Ginna van Son, until Gilpin Historical friends showed up and took over. The weather was ideal for the outdoor Wild West shows. Most expected a shootout at noon, but the three sections of road work along the way got members of the group there at delayed times. The shows were at 1, 2, and 3 p.m. on Saturday.

Dramatizing historical local scenes were played out just as the Wild Bunch does in front of the Belvedere Theatre on Main Street in Central City most Saturdays in the summer. This was the second time at the Last Shot this summer. Each show had a different story line of miners, cowboys, ranchers, shop-keepers, lawmen, and Ed Harris as the often needed Central City undertaker. Period attire and props, being armed and noisy (rather than dangerous) the skits were set in the late 1800’s when the west had stories going around the world of being the wild frontier.

Mostly Europeans immigrants, but also other nationalities were spreading out to these parts. Many local mining communities burst to thousands of people, yet the ghost towns are hardly recognized as ever being there now. The Wild Bunch set their stories in the towns that were, to remember the lessons to be learned.

Remembering history as it was is the purpose of the Wilde Bunch. Their tales remind us of our local origins of those bravely seeking minerals to get rich quick, and find entertainment along the way. Gold was first discovered in 1859 in both Gregory’s Gulch near what became Black Hawk and Central City as well as what became Idaho Springs. Many used every means possible to get by in the vast wilderness, often relying on a horse, a gun, and pure luck.

The Wild Bunch was happy to have shade trees and grass to fall on when the blank guns were drawn and fired to re-enact the story. The crowds were filled with fine food and refreshing beverages gathered on the deck outdoors at the Last Shot.

The volunteer cast of characters, thanking Roy & Barb Stewart, and the Gilpin Historical Society for support included: Tom Massinger as Ed Harris Undertaker, Mischievously Impatient Mike Keeler as a cowboy, Chuck Folsom as Chicken Creek Charlie, Jonas Schrock portraying his relatives as Marshal Glass, and his wife Jaclyn Schrock as Mrs. Harris. A guest also joined in as cowboy Mike tried to impress this young lady with his charms.

The Gilpin Historical Society is welcoming friends to the Stroehle House 231 Chase Street in Black Hawk, Sunday August 18th from 1-4 p.m. There will be Victorian games, homemade ice cream, and gentile social opportunities.

Another well-attended annual fund raising event for the Gilpin Historical Society will be on September 7th at Fairmount Cemetery in Denver. GHS is providing transportation from Central City to the Fairmount, our first Cemetery Crawl outside of Gilpin County. Many Gilpin and Colorado residents have received historical information characterized by those who lived here portrayed by a volunteer impersonating them to share their life in Gilpin County. Each year 10 characters are portrayed that lived in our colorful past, previously at local cemeteries. This year, we visit Gilpin people who were buried in Denver’s Fairmount Cemetery. Tickets are available from the Gilpin Historical Society online.

END_OF_DOCUMENT_TOKEN_TO_BE_REPLACED

Benefitting the county, schools, and much more By Don Ireland   This year marks the 30th anniversary of casinos opening in the former little mining towns of Black Hawk, Central City and Cripple Creek, Colorado. In those early years, smoking was allowed inside ... END_OF_DOCUMENT_TOKEN_TO_BE_REPLACED

Where the dead get to tell their story By Jaclyn Schrock On Saturday, August 21, the Gilpin Historical Society held their annual Cemetery Crawl. Tickets allowed the shuttle of hundreds of guests from the Teller House parking lot to the Cemetery. Depending on v... END_OF_DOCUMENT_TOKEN_TO_BE_REPLACED