Whose face is on the barroom floor? 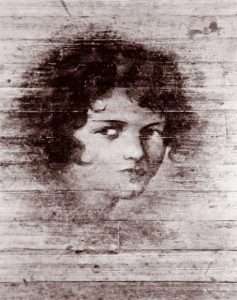 It’s Not Who You Think It Is

Many people, quite understandably, assume they know whose face is on the barroom floor of the Teller House in Central City, an image which, over the years, has been a very popular attraction. This article will offer them a new perspective on the longstanding story.

First, a brief review of the legend will help those unacquainted with the full narrative.

It was 80 years ago, in 1936, that the painting (well-known as The Face on the Barroom Floor) mysteriously appeared in the Teller House. At that time, no explanation for its creation was forthcoming. The painting on the floor simply materialized one morning, surrounded by the debris of the building’s recent remodeling. No one claimed to be the image’s originator, nor its model.

That changed in 1946, when well-known Denver Post illustrator Herndon Davis stepped forward to identify himself as the painter of the enigmatic image. After Davis’s death in 1962, it was revealed that the model for the Face was his wife, Juanita.

The commonly-known version of the story is detailed in the following account. [1]

Story of the Painting

Herndon Davis had been commissioned by the Central City Opera Association to paint a series of paintings for the Central City Opera House; he was also requested to do some work at the Teller House. One afternoon at the bar he became embroiled in a heated argument with Ann Evans, the project director, about the manner in which his work should be executed. The upshot of the fight was that Davis was told to quit, or else he would be fired.

According to one version of the story, the painting was the suggestion of a busboy named Joe Libby; knowing that Davis would soon be fired, he suggested that the artist “give them something to remember [him] by.”

In Davis’ own words –

“The Central City Opera House Association hired me to do a series of paintings and sketches of the famous mining town, which they were then rejuvenating as an opera center and tourist attraction. I stayed at the Teller House while working up there, and the whim struck me to paint a face on the floor of the old Teller House barroom. In its mining boom heyday it was just such a floor as the ragged artist used in d’Arcy’s famous old poem. But the hotel manager and the bartender would have none of such tomfoolery. They refused me permission to paint the face. Still the idea haunted me, and in my last night in Central City, I persuaded the bellboy Jimmy Libby to give me a hand. After midnight, when the coast was clear, we slipped down there. Jimmy held a candle for me and I painted as fast as I could. Yet it was 3 am when I finished.”

Whatever the inspiration, Davis did not sign his work, and soon the bar’s owners chose to capitalize on it. They advertised the painting as that from the poem “The Face on the Barroom Floor” by Hugh Antoine D’Arcy. The actual subject of the painting is Davis’ wife Edna Juanita (Cotter) Davis “Nita.”

But was the face truly Juanita’s? Consider the following intriguing excerpt from a later Denver Post article (October 8, 1967, pg. 26). (In it, Herndon’s wife – Juanita Davis – is referred to as “Nita Davis.”)

“… she still insists that the misty face that stares up from the floor of the Teller House in Central City isn’t hers.

“And furthermore, Mrs. Nita Davis doesn’t want to talk about it“… Mrs. Davis, now 65, lives in seclusion in Denver and refuses to talk about her legendary husband with the penchant for painting on floors ….”

So if the Face was not Juanita’s, whose was it?

Recently, Barbara B. Kendall, of Monument, CO, stepped forward to put a fresh spin on the tale, when she stated that the model for the “Face” was none other than her mother – June Mahoney Bazata.

In 1936, Anne Evans (prominent member of the Central City Opera House Association, and one of the founding forces behind the revitalization of the Opera House in 1932) hired my father – Art J. Bazata – to manage the Teller House and its restoration. Herndon Davis had been chosen to create a number of paintings for the walls of the bar in the building. One evening, my father and mother (June) – met with Herndon at Denver’s Brown Palace Ship’s Tavern for drinks. Publicity for the remodeled Teller House was discussed. The idea of “finding” the face on the barroom floor as described in the poem by Hugh Antoine d’Arcy ignited a creative storm.

That same evening the three of them drove to Central City and worked by candlelight throughout the night. My mother posed for Herndon and the bellboy (Jimmy Labrizo) held the candle for Herndon to work by (electric lights were avoided so that undue attention was not drawn to their activities.)

The completed painting was covered with debris from the remodeling. Later, the painting was “discovered” and it gave a big public relations boost to the opening of the Teller House and the adjacent Opera House that summer. The four agreed to keep their efforts a secret.

My father kept that promise until 1946 when Herndon claimed the painting as his work. My mother was very shy about her role in the painting and shared the story with only family and close friends. I assume that posing as a face in a barroom was embarrassing to her. Many times as I was growing up, my mother personally told me that she posed for Herndon while he painted the Face on the Barroom Floor. My father did not feel so constrained and shared the story. It has been mentioned in print in The Denver Post (1953) and in his obituary in The Rocky Mountain News (1973).

I believe that Herndon Davis or his friends embellished this story by saying that he did the painting without permission from the project manager and also that the inspiration for the painting was his wife rather than my mother.

Finally, if one examines the Face on the Barroom Floor, it is fairly obvious that it closely resembles an Irish woman, June Mahoney Bazata, my mother. Please see the attached photos of June Bazata and Juanita Davis.

Kendall’s revelation has put a new face on an old tale.

There were four people present at the creation of the “Face” in 1936 – Herndon Davis, Art and June Bazata, and the bellboy, Jimmy Labrizo.

The 80-year-old mystery has been resolved. The painting on the barroom floor was conceived as a creative public relations tactic to promote the Central City Opera and The Teller House.

And the evidence shows that the model for The Face on the Barroom Floor was June Mahoney Bazata.

References
Wikipedia.org entry entitled –
“The Face on the Barroom Floor
(painting).”
Supporting Documentation
In an audio recording made in 1971, Art Bazata related his personal account of his involvement with the Face legend. The following excerpt is a transcript of the pertinent section.
In 1936, Anne Evans was reactivating the old Central City. She talked me into being the Manager of the Teller House. …It was Herndon Davis, an artist, and myself who were
responsible for putting The Face on the Barroom Floor up there at The Teller House.
I’ll tell you the true story, but probably a made-up story would sound better. But when I was manager of the Teller House in 1936, Herndon Davis, who had been commissioned
by Miss Anne Evans to do some paintings up in Central City as he saw fit – he and I became quite friendly and he and my wife June were having a drink down at the Brown Palace Hotel one day in the old Ship’s Tavern and I really can’t remember from whom the idea sprang, but among the three of us, one of us said, “You know what we ought to do up there – to give that place some life – is to paint The Face on the Barroom Floor.”
Art continues his story by stating that the threesome traveled up to Central City that very night. Jimmy Labrizo, a bellboy at The Teller House, held a candle for Herndon to work by. Art concludes –
“…and Herndon Davis painted the ‘Face’ and we covered it with sawdust and a few days later someone discovered it…”
Related Links
Links to two photos on the DENVER PUBLIC LIBRARY’s website (Digital Collections age)
• JUANITA DAVIS
http://tinyurl.com/jb682ky
• THE FACE on the BAR ROOM FLOOR
http://tinyurl.com/gkprl4z
*NOTE that both of the photos detailed above have been approved for use in this news release and for subsequent publication by media outlets to which this news release
is submitted. The Letter of Agreement for Use of Photographic Reproductions from
the manager of the Western History/Genealogy Department, Denver Public Library has been signed.
*NOTE – The remaining links below connect to Google Drive.
• Photo of June Mahoney Bazata Sitting on Wall, close-up.
http://tinyurl.com/zrpk4ps
• Photo of June Mahoney Bazata Sitting on Wall, full-length.
http://tinyurl.com/zfamjeh
• Profile of Art Bazata, The Denver Post, Roundup Magazine, Empire
Profile, May 3, 1953, pg. 9. (see image of pertinent section)
http://tinyurl.com/jle6vtr
• Obituary of Art Bazata, The Rocky Mountain News, January 31, 1973, pg. 16. (see image of pertinent section)
http://tinyurl.com/jn44fms
• Juanita Davis Denies ‘FACE’ Legend, The Denver Post, October
8, 1967, pg. 26.
http://tinyurl.com/hhkg4ub
• Juanita Davis Denies ‘FACE’ Legend, The Denver Post, October
8, 1967, pg. 26.
http://tinyurl.com/jf2q9sg

END_OF_DOCUMENT_TOKEN_TO_BE_REPLACED

Where the dead get to tell their story By Jaclyn Schrock On Saturday, August 21, the Gilpin Historical Society held their annual Cemetery Crawl. Tickets allowed the shuttle of hundreds of guests from the Teller House parking lot to the Cemetery. Depending on v... END_OF_DOCUMENT_TOKEN_TO_BE_REPLACED