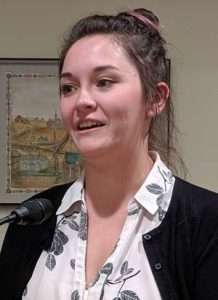 Council met with Staff for a Work Session immediately prior to the regular meeting on Tuesday, October 1, 2019. City Staff presented a funding option for the project which would enable the City to “sell” up to $900,000 in tax credits to business and keep 85% of the sales for the project. Council was encouraged by the funding options and directed staff to continue to pursue those options. Council will need to approve a budget amendment in a regular meeting later this year.

The Mayor called for a motion to approve the consent agenda which consisted of the minutes from the September 17 meeting and regular bill lists through September 13. Alderwoman Johnson moved to approve the Consent Agenda and was seconded by Alderwoman Laratta. Alderwoman Laratta asked about a payment to Front Range Fire Apparatus for fire truck repair in the amount of $11,301 and wondered if this was for the new fire truck. Chief Allen responded that this was for old equipment and was not sure of the vehicle number, but believes it was for Engine 96. Manager Miera offered to provide a breakdown of the expense and which vehicle it was for. The motion passed unanimously.

The Council considered a request for Promise Program funds for the continuing education of resident Adria Bleske. She is in her second year at the Rocky Mountain College of Art and Design achieving straight A’s her first year with a GPA of 3.909, specializing in illustration. “I want to go into children’s books,” said Adria.

Alderwoman Laratta moved to approve the request of $5,000 from the Promise Program for Adria Bleske and was seconded by Alderwoman Johnson. The motion passed unanimously.

Manager Miera announced that Central City was awarded a grant from GOCO (Great Outdoors Colorado) for $47,800 to be used toward a master plan for a trail network and other recreational opportunities. GOCO awarded grants to Central City, La Junta, Trinidad, Fountain, Grand Junction, Oak Creek, Silverton, and Paonia. Work on the trail system will begin next year. Alderman Aiken asked if the trail system will connect to Black Hawk. Director Rears responded that it will connect with Black Hawk, Chase Reservoir, and one other trail system. It could include trails along the Central City Parkway if it is deemed useful and needed.

Alderwoman Laratta commented on the condition of the trees on the sides of the streets. “They’re dying. I spoke to two arborists about it and they think it is from runoff of what’s put on the streets during the wintertime.” Manager Miera responded saying they talked about the issue during a budget session on stormwater improvements. The affected trees are receiving more runoff than other areas because of drainage issues. The City is looking at reducing the amount of ice slicer in the mix and increasing the sand to see if that helps. There will be slight savings, but the mixture will be less effective on snow and ice. Mayor Fey asked if they could be more specific about what they use and where, such as the Parkway where there are no trees. “We want to save trees, but we also want to save lives,” said Fey. Manager Miera responded that they already use “pretty much 100%” ice slicer on the Parkway. Director Hoover added that if they use two different mixes, State Law requires him to store the mixes in enclosed domes and he would need two different storage areas. Hoover also said that there are no definitive studies linking the ice slicer to the tree problem. Manager Miera added that the problem is seen in areas where trees and other foliage are not exposed to the ice slicer, so there is more than just what is on the streets affecting the trees. He said the City is taking a proactive approach to reduce the impact of ice slicer to determine what else is affecting the roadside trees. Alderman Aiken asked if the City could reuse the sand that is swept up. Director Hoover responded that the City of Lakewood has a big recycling program and they discovered that it costs more than it is worth. The recycled sand has been ground down by vehicles and the smaller particles cause issues in the mix and for the trucks. Alderwoman Laratta commented that “trees are great sound buffers; they are great oxygen makers,” and “they’re great against erosion most of all.” Alderman Hidahl chimed in saying “We need to look at what trees we have around the City. There is one that has taken over entire hillsides and I think it could qualify as a noxious weed.” He continued that there are some trees they may not want, while others need preserved. Hidahl offered that they could get a CSU agent to look at the problem. He was referring to the CSU Extension employee for the County of Gilpin.

Alderman Hidahl commented, “It’s only 7:34 p.m. and we’ve all taken the trouble to get here tonight. I think we should stay and talk about topics we have not gotten to.” Mayor Fey responded, “I’m all in.”

Mayor Fey publicly congratulated the Zimpel family on the sale of the properties to Maverick Gaming. “Thank you for the contribution to the City. I wish him (John Zimpel) and his family nothing but good on their next venture.” Fey also said he knows and has worked with several people with Maverick Gaming and is optimistic about their future in Central City.

Alderwoman Laratta commented, “I think it was a beautiful summer, the flowers were gorgeous, we have a lot of events and the streets were always crowded.”

Mayor Fey publicly thanked the Opera Association and Gilpin Arts for the Plein Air event this last weekend. “It was a true pleasure to be on the ground during the event. It’s a wonderful model of what we should look forward to in the future.”

Alderman Hidahl commented, “Thanks for the West Staircase that’s open and being used again.”

Mayor Fey opened the floor to the public for anyone who wished to speak to the council on any items not on the agenda. Three people chose to address council.

Mark Ragan, Executive Director for the Peak to Peak Players, spoke to council about his organization. The group started with productions in Gilpin School and were later invited by Superintendent Dave MacKenzie to take over the elementary drama program. “The big news is that we are now the resident theater company at the Williams Stables just down the street.” They are hoping to turn the stables into “a really vibrant community theater,” but also outreach to the community. Ragan said they want to bring back square dancing, movie nights, and children’s events. “We could not have done any of this without the Central City Opera,” stated Ragan.

Barbara Thielemann, coordinator for the Main Street Commission, next spoke to Council. She thanked Deb Whiteman and her team for putting out the cornstalks and other decorations along Main Street. The Pumpkin Patch event is coming the weekend of October 12 and 13, featuring a bouncy castle and “trunk or treat.” The event runs from 10 a.m. to 4 p.m. each day.

Deb Wray, President of the Historic Preservation Commission, next addressed council. Wray stated, “Part of the arts is the Historical Society.” She announced that the Creepy Crawls were coming back on the third and fourth weekends of October. “We hope to have 8,000 people this year. There are already several time slots that are sold out.” Deb then reported that the Cemetery Crawl, held at Fairmont Cemetery in Denver, had a great turnout. It was fun to connect many of Gilpin County’s leaders to their final resting place. Wray then thanked Council, Staff, and the Mayor “for supporting us.”

Mayor Fey adjourned the regular meeting at 7:48 p.m. The next regular Council Meeting will be Tuesday, October 15, 2019.

END_OF_DOCUMENT_TOKEN_TO_BE_REPLACED

Benefitting the county, schools, and much more By Don Ireland   This year marks the 30th anniversary of casinos opening in the former little mining towns of Black Hawk, Central City and Cripple Creek, Colorado. In those early years, smoking was allowed inside ... END_OF_DOCUMENT_TOKEN_TO_BE_REPLACED

Benefitting the county, schools, and much more By Don Ireland   This year marks the 30th anniversary of casinos opening in the former little mining towns of Black Hawk, Central City and Cripple Creek, Colorado. In those early years, smoking was allowed inside ... END_OF_DOCUMENT_TOKEN_TO_BE_REPLACED