What’s all the buzz about bees? 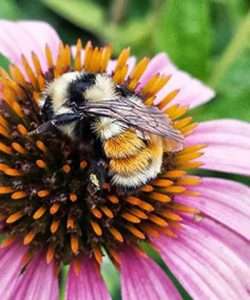 Honey bees are good, but so are native bees

It’s no secret that honey bees are having a hard time. Farmers, beekeepers, and biologists sometimes refer to it as the “beepocalypse.” Even though colony collapse disorder is less of an issue than it was in years past, beekeepers continue to mysteriously lose between 30% and 40% of their stock every season. This worry has contributed to a huge national uptick in interest in backyard beekeeping, often in an effort to help the crisis. Other beekeepers may be in it for the sheer joy of watching and tending their colony, for the delicious honey, or as part of a self-reliant philosophy.

It all sounds so rosy and virtuous, but there can be some serious downsides to backyard beekeeping. The first is that many people lose interest in their hives after a year or two, and stop tending them. Keepers who don’t regularly check on the health of their bees can easily allow the spread of pathogens to other nearby healthy hives. Novices who aren’t aware of the challenges, or who aren’t willing to put in the effort, risk destroying their own hives – and other hives miles away from them.

The diseases can also spread to native bee populations (there are over 4,000 native bees in the U.S., and 946 native bee species in Colorado alone). There are at least two pathogens that infect honeybees that have been observed to cross over into populations of wild bumblebees, which could cause even further declines into already plummeting populations.

The second reason is that the non-native honeybees can compete with and cause declines in our native bees. In a review of all the literature involving the effects of honey bees on wild bees (Mallinger et al., Plos One, 2017), they found that of studies examining competition, 53% reported negative effects on wild bees, while 28% reported no effects and 19% reported mixed effects (varying with the bee species or variables examined). 70% of the studies showed the potential for negative effects due to pathogen transmission.

Even while honey bees seem to have pride of place as a symbol of environmental conservation, it doesn’t really translate to the actual environment in the United States, and certainly not here in the mountains. “Honeybees are not going to go extinct,” says Scott Black, executive director of the Xerces Society. “We have more honeybee hives than we’ve ever had and that’s simply because we manage honeybees. Conserving honeybees to save pollinators is like conserving chickens to save the birds.” This means that much of our concern has been placed on the wrong bees.

But what about pollinating agricultural crops? Even though honey bees are much easier to tote around, managed honey bee colonies only supplement the work of natural wild pollinators, not the other way around. In a study of 41 different crop systems worldwide, honeybees only increased yield in 14 percent of the crops (Garibaldi et al, Science, 2013). So, really, we should be doing everything we can to support our struggling native bees – which includes planting a diversity of native plants that bloom for the entire season, keeping some bare ground available to ground-nesting bees, and reducing our use of insecticides.

This is not to say that if you are an avid beekeeper, as long as you manage your hive well, that you shouldn’t continue doing so. Just don’t keep bees for the wrong reasons.

END_OF_DOCUMENT_TOKEN_TO_BE_REPLACED

Where the dead get to tell their story By Jaclyn Schrock On Saturday, August 21, the Gilpin Historical Society held their annual Cemetery Crawl. Tickets allowed the shuttle of hundreds of guests from the Teller House parking lot to the Cemetery. Depending on v... END_OF_DOCUMENT_TOKEN_TO_BE_REPLACED