Most mountain well owners have heard that it is recommended to test your well every couple of years for “bacteria.” For the most part, this recommendation refers to coliform bacteria, which can make you sick. The Gilpin County Public Health Agency can provide this test for you (303-582-5803, the cost is $20). If it’s been awhile since you tested your well (especially if guests suffer stomach ailments), I suggest you take advantage of this service.

However, there can be other kinds of bacterial contamination in wells (particularly iron or sulfur bacteria) that aren’t necessarily health hazards, but can be annoying. They are also a lot more likely to get your attention – iron and sulfur bacteria usually have strong odors and produce obvious staining, while the harmful bacteria rarely has any “tells” (no odor and no discoloration). I have gotten a couple of calls about iron or sulfur contamination lately, so it seemed timely to talk about this problem.

Here is more information on sulfur and iron bacteria from the Colorado Department of Public Health and Environment: Iron bacteria and sulfur bacteria contaminations are often difficult to tell apart because the symptoms are so similar. To complicate matters, sulfur-reducing bacteria often live in complex symbiotic relationships with iron bacteria, so both types may be present.

Iron bacteria are generally more common than sulfur bacteria because iron is abundant in ground water. Iron bacteria can produce a foul smelling orange or brown slime that can cause unpleasant odors, corrode plumbing equipment and fixtures, and clog well screens and pipes. If conditions are right, the bacteria can grow at amazing rates, rendering an entire well system useless in just a few months. Signs that may indicate an iron bacteria problem include yellow, red, or orange-colored water; rusty slime deposits in toilet tanks; and strange smells resembling fuel oil, cucumbers, or sewage. Sometimes the odor will only be apparent in the morning or after other extended periods of non-use.

There are two categories of sulfur bacteria; sulfur oxidizers and sulfur reducers. Sulfur-reducing bacteria are the more common. Sulfur-oxidizing bacteria produce effects similar to those of iron bacteria. They convert sulfide into sulfate, producing a dark slime that can clog plumbing. Sulfur-reducing bacteria live in oxygen-deficient environments. They break down sulfur compounds, producing hydrogen sulfide gas in the process. The distinctive “rotten egg” odor of hydrogen sulfide gas is the most obvious sign of a sulfur bacteria problem. Hydrogen sulfide gas is foul smelling and highly corrosive. As with odors caused by iron bacteria, the sulfur smell may only be noticeable when the water hasn’t been run for several hours. Blackening of water or dark slime coating the inside of the toilet tank may also indicate a sulfur bacteria problem.

If the sulfur odor is only present when hot water is run, sulfur-reducing bacteria could be building up in the water heater, due to the “sacrificial anode.” If this is the case, the heater can be turned up to 160 degrees for eight hours to kill off the bacteria – make sure to warn family members first, so no one gets scalded!

Why do some wells get contaminated? In some cases, iron or sulfur bacteria contamination can be caused by unsanitary well drilling or pump repair. Make sure that anything that will be going into the well is disinfected (that goes for you or your licensed well contractor). Sometimes the bacteria just gets into your wells due to presence of the bacteria or the iron and sulfur in our fractured rock aquifers, and there’s not too much you can do to prevent it.

The most common recommended treatment for the bacterial contamination is a “shock” treatment of your well.  This means adding chlorine to the well to disinfect the water, and should be done by a licensed well contractor.  Unfortunately, this isn’t always a long-term solution, since the bacteria can build back up again in a short amount of time. If this is the case, it may be necessary to install a continuous chlorination system. Again, contact a well professional to discuss your options.

Irene Shonle is the Director of the CSU Gilpin County Extension Office, which is located at the Exhibit Barn, 230 Norton Drive, Black Hawk, CO 80422, 303-582-9106, www.extension.colostate.edu/gilpin.

Colorado State University Extension provides unbiased, research-based information about, horticulture, natural resources, and 4-H youth development. As part of a nation-wide system, Extension brings the research and resources of the University to the community. Colorado State University Extension is dedicated to serving all people on an equal and nondiscriminatory basis. No endorsement of products named is intended nor is criticism implied of products not mentioned. 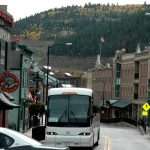