What is a Green Book, anyway? 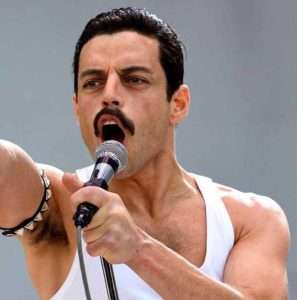 The 91st Academy Awards is over, and it went off without a hitch (not counting Rami Malek’s fall after accepting his Oscar causing paramedics to be called, but that was off-screen). The host-less Oscars played it safe; cautiously handing out awards as if avoiding any opportunity for further embarrassment. The show opened with Queen performingtheir iconic mashup hit, “We Will Rock You/ We Are the Champions” led by a lackluster performance by Adam Lambert; Lambert has the pipes, but not the energy or entertaining charisma of Freddy Mercury. This set the tone for most of the show; presenters and winners chiefly stayed away from politics and divisive issues. The best presenters, by far, were the comedic team of Maya Rudolph, Tina Fey, and Amy Poehler, riffing on the missteps of the Academy; although Melissa McCarthy and Brian Tyree Henry obnoxiously dressed in outfits representing every movie nominated for costume design complete with rabbits and Wakonda face paint, gave them a run for their money. One of the cutest moments was when Dame Helen Mirren, with an infectious grin, pointed at her co-presenter, Jason Momoa, like a giddy schoolgirl exclaiming, “Look who I’m with!” Low-lights for the evening include the “In Memorium” montage backed by an uninspiring John Williams composition with the fewest clips from the late Academy members’ works possible, the choices for bumper music that did not connect to the award category or presenter or winner (there were three or four times it did match which made the rest of the night awkward), and Spike Lee’s tantrum after “Green Book” took the Best Picture award.

The biggest winner of the night was “Bohemian Rhapsody” with four awards in Actor in a Leading Role, Sound Editing, Sound Mixing, and Film Editing. There is a lot of hate for this movie from the Hollywood snobs and film critics who say this should never have been nominated for Best Picture because there was little substance to the story with poor script-writing. I felt the movie was very entertaining, but I, too, felt it should never be best picture mostly because they forgot they were telling a story and included an amazing 20 minutes of Live Aid performance in place of the actual story. The industry favorite, “Roma” took home three awards in Foreign-Language Film, Cinematography, and Best Director. It absolutely deserves Cinematography, but it sure is a boring film, so I am glad it also did not win. Tied with “Roma” is “Green Book” and “Black Panther.” While I am glad “Green Book” took Best Picture (along with Supporting Actor and Original Screenplay), I am encouraged that “Black Panther received the love it did with Production Design, Costume Design, and Original Score. Olivia Colman was awarded the Oscar for Actress in a Leading Role, which I suppose she deserves, but one clip of Glenn Close’s performance from “The Wife” seemed to outclass every other nominee. Regina King’s win for Best Supporting Actress in “If Beale Street Could Talk” was obvious as everyone in the industry was putting her at the top of their lists. Also, at the top of everyone’s list was “Spider-man: Into the Spider-Verse,” so their award for Animated Feature was completely expected. Also, as no surprise was wins for “Free Solo” in Documentary Feature and “Shallow” as Best Original Song from “A Star is Born.” The obligatory political nominee of the year, “Vice,” surprisingly only took home one award for Makeup and Hairstyling, and the early favorite, “First Man” only grabbed Visual Effects. The winners in the short films were “Period. End of Sentence” for Short Subject, “Skin” for Live Action, and “Bao” for Animated.

I mentioned putting “Vice” on my bucket list so I could give it a proper review; however, I could never make myself go see it. Now that it hasn’t won an award of significance, I probably never will and here is why. Most years, Hollywood finds it necessary to pump out a movie about a person or event that is inherently political with an extreme left-leaning bent to get viewers to agree with their viewpoint. Last year, it was “The Post” featuring the big-name stars Tom Hanks and Meryl Streep. This movie was timed as a response to the current administrations repeated references to “fake news.” This trend may have started in the 90s with “Wag the Dog” as a decidedly right-leaning response to President Clinton bombing some location in the Middle East allegedly to take focus off his domestic troubles regarding Monica Lewinsky. I find these political movies change no one’s mind and only serve to increase division in this country instead of finding common ground. Therefore, I seldom put effort into viewing these films, and I haven’t put that effort into seeing “Vice.”

The title of the Best Picture refers to The Negro Motorist Green-Book which was an annual publication during the Jim Crow era of open and legally prescribed discrimination against African Americans. Black Americans in that time faced refusal of food and lodging in many places (mainly in the South) and even had towns posing curfews to blacks only. The Green Book listed restaurants, hotels, and other locations friendly to black people. William Smith commented in a published letter of 1938, “It is a book badly needed among our race since the advent of the motor age. Realizing the only way we knew where and how to reach our pleasure resorts was in a way of speaking, by word of mouth, until the publication of The Negro Motorist Green Book…We earnestly believe that will mean as much if not more to us as the A.A.A. means to the white race.” In a sense, we learn through the movie, “Green Book” why this publication was necessary and what happens when you do not follow its advice. Although several in the movie industry decry “Green Book” for it being a story through the white person’s eyes, and that the white character is the hero-savior (I did not see it that way – I wonder if it is a cultural difference), the message and history lesson is important for people to know and understand. There is no doubt in my mind that “Green Book” deserves the Best Picture award.

END_OF_DOCUMENT_TOKEN_TO_BE_REPLACED

Where the dead get to tell their story By Jaclyn Schrock On Saturday, August 21, the Gilpin Historical Society held their annual Cemetery Crawl. Tickets allowed the shuttle of hundreds of guests from the Teller House parking lot to the Cemetery. Depending on v... END_OF_DOCUMENT_TOKEN_TO_BE_REPLACED

Benefitting the county, schools, and much more By Don Ireland   This year marks the 30th anniversary of casinos opening in the former little mining towns of Black Hawk, Central City and Cripple Creek, Colorado. In those early years, smoking was allowed inside ... END_OF_DOCUMENT_TOKEN_TO_BE_REPLACED