What do you consider lethal? 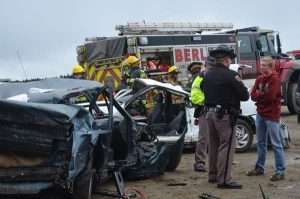 Gilpin youth learn about the number one killer of teens

Four teens in a car cruise around the parking area behind the school building. Good kids, just having fun. The driver, messing around, sends the car into a drift near a slope created by recent excavation. Disastrously, it careens over the edge, rolls, and crashes into a car driven by a school administrator. After a few moments of silent shock, the grim reality becomes apparent that six lives have been forever changed by a split-second reckless decision.

That was the staged scenario enacted on Thursday, September 28, at Gilpin County School to give middle school and high school students a very important message during homecoming week: It’s critical to pay attention. Reckless and distracted driving is the number one killer of American teens.

The reenactment was an “Alive at 25” event. These are presented every couple of years at the school to help increase student awareness of the importance of careful driving and to prevent auto accidents. The drills also serve as good training for emergency personnel. A warning that it was an exercise went out to all parents and students.

The crashed cars were wrecks obtained by area first responders and positioned at the bottom of the slope adjacent to the football field. Several Gilpin students and secondary principal Alexis Donaldson volunteered to play the roles of the teens and the administrator. Junior Brekken Billman was the teen driver and was uninjured. His passengers were junior Cooper Lindberg (who was not wearing a seatbelt and “died” instantly as he was ejected through the windshield), senior Katelyn Armstrong (with a simulated broken pelvis), and sophomore Alicia Johnson (with a fake carotid artery dissection, or torn neck artery). Principal Donaldson suffered a brain injury; her daughter Hannah was in the car with her mother, uninjured but traumatized. The actors were moulaged – made up with mock injuries – starting at 7:00 a.m. by members of the Gilpin Ambulance Authority.

They got into position on that chilly, overcast morning, Cooper lying face down on the cold hood of the car and everyone splattered with simulated blood. At 9:00 a.m., students spilled out of the schoolhouse doors and made their way to the field.

They were met with the sight of the wreckage.

Brekken tried to get a response from Cooper, realized there would be none, and leaned on the car with his head in his hands. His passengers screamed for help.

Emergency crews began arriving. Gilpin County Sheriff, Central City Fire, Timberline Fire, Black Hawk Fire, and the Colorado Highway Patrol all responded, until there were about two dozen workers on the scene. The Gilpin County Coroner was also present. A dispatcher’s voice crackled over a loudspeaker. An Air Life helicopter had been planned but was grounded due to fog.

Cooper was covered with a white sheet while workers got busy with the Jaws of Life to rip the door off of Ms. Donaldson’s car and get her extricated. Brekken and Hannah, able to walk unaided, were checked over. The injured were lifted onto stretchers and loaded into two waiting ambulances.

Students watched intently as Brekken was questioned by Trooper JD Cleveland of the Highway Patrol.

“Did you do anything distracting while you were driving?”

The trooper confiscated Brekken’s cell phone, then said, “Do you understand that you caused a crash that injured three people and killed another? You will be charged with the felonies of vehicular homicide and vehicular assault. And, you were driving without passenger restraints.”

Trooper Cleveland also discovered that Brekken had only been driving for six months, which meant he was not even supposed to have passengers. He cuffed the young man’s hands behind his back. The trooper then turned Brekken’s pockets inside out, found his car keys, and took them. As Brekken was led away to face the consequences of his reckless driving choices, the student audience adjourned to the atrium, where they talked things over.

Comments ranged from “I felt like laughing, because it wasn’t realistic” to “It was gruesome, scary, and sad.” One girl said, “Being in an accident is my worst fear.” Another student related personally to the situation as she commented, “Brekken was going 20 over the speed limit. I was going 20 over when I got my first ticket – just went to court for it yesterday. I got a big fine and six points on my license.”

At 10:00 a.m., everyone filed into the auditorium to hear Leeana Clegg of the organization Impact Teen Drivers (ITD), which is headquartered in Sacramento, California. The group’s goal is to educate young drivers with meaningful messages about distracted driving.

A slide appeared on the big screen at the front of the auditorium with the question, “What do you consider lethal?” Answers seemed irrelevant, even humorous – lip gloss, a latte. Clegg immediately reached out by asking her audience: “What do YOU consider lethal?” She tossed t-shirts to those who responded. Guesses included “drinking and driving,” “anything that distracts,” and “whatever takes your hands off the wheel.”

Turns out that putting on lip gloss can do just that. And a hot latte spilled in your lap can definitely cause you to take your eyes off the road.

Statistics provided by ITD show that 70 percent of teens who lose their lives in crashes were not wearing seat belts. 50 percent were passengers. 75 percent did not drink or do drugs. They were reckless and distracted.

“It is distracted and reckless driving that causes more deaths than drugs and suicide combined,” Clegg related.

Examples of distractions include eating, drinking, looking for something in the car, or talking to friends. Above all, texting and driving can be a horrifically dangerous combination.

She told her own story of being mom to 14-year-old Hunter.

“He was affectionate, kind, and gentle. He was the coolest kid – always doing something adventurous.”

One day in 2009, she and her husband got a call that no parent wants to get and no first responder wants to make. Hunter had been in an accident.

Hunter and some friends were excited about going on a camping trip. The boys met at the home of a 17-year-old friend. There were too many of them to fit in one car, so the friend’s father asked his son to drive also, even though the teen had only had his license for a short while. Clegg pointed out that the dad knew his son shouldn’t be driving his friends and suggested that the youth could have respectfully told his dad “no.” He chose to drive, although he knew he shouldn’t.

The kids were having fun, skidding on loose gravel around curves. One curve came up faster than the others. The car drifted and the inexperienced driver overcorrected and lost control. The car shot across the road and hit a tree, killing Hunter instantly. The others were unharmed, but two of them never returned to public school. It was too much to deal with.

Deputy Ramsey explained Colorado’s graduated license law, which is designed to help new drivers gain experience in stages. “Many high schoolers have permits. For one year, no one is allowed in the car with you except the person who signed your affidavit (of liability and guardianship).”

When a driver younger than 18 gets his or her license, they can’t carry more than one passenger until they’ve held their license for one year. Seat belts are required for all passengers. There are curfews; Central City’s is 10:00 p.m. on weeknights and 11:00 p.m. Friday through Sunday. A cell phone may only be used to call 9-1-1.

“The laws are in place to save lives, not to ruin your fun. Obey them,” Clegg said. “We never talked with Hunter about being a good passenger. I wish we would have talked with him about speaking up.”

She encouraged students to make a game plan as the driver, talk to parents, learn from others’ mistakes, and choose to ride and drive distraction-free.

“You have the ability to change the driving culture. Start saving lives today. Crashes are 100 percent preventable.”

Brekken Billman agrees. “It was scary causing the accident, even though it wasn’t real. It made an impact on me. I will be a safer driver.”

END_OF_DOCUMENT_TOKEN_TO_BE_REPLACED

Benefitting the county, schools, and much more By Don Ireland   This year marks the 30th anniversary of casinos opening in the former little mining towns of Black Hawk, Central City and Cripple Creek, Colorado. In those early years, smoking was allowed inside ... END_OF_DOCUMENT_TOKEN_TO_BE_REPLACED