What are those birds? 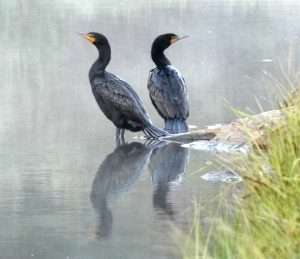 They are big, black, with long necks and beaks. Anyone who has driven past Kriley Pond on Hwy 46 has seen them on the inlet spit sunning themselves and looking for a quick meal. What are those birds? They’re Neotropic cormorant, Phalacrocorax brasilianus aka Double Crested Cormorants. According to Colorado Parks and Wildlife Volunteer, Carl Salazar, some folks call them “Willets.” Whatever you call them, they are a fascinating bird with an interesting story. Most folks misidentify them as Loons.

For eons Cormorants lived in rocky cliffs along the east and west coasts, but recently for one reason or another, they decided to travel and spend a summer vacation in Colorado. It must have been the clean air and healthy lifestyle. According to a 2010 article in the Clear Creek Current authored by Sylvia Brockner, the first recorded sighting of Cormorants in Colorado was in 1912 with only four records. By 1931, the first breeding record was reported by Bailey and Neidrach (Birds of Colorado, 1965) with a total of eight pairs nesting near Barr Lake. By 1939 that colony had 30 pairs and by 1995 the colony had 248 pairs. Statewide population in ’95 was over one thousand, mostly in the lowland and western slope lakes. The Kriley Pond birds started appearing around 2014 with one individual. A 2018 guestimate of three to four birds now call Kriley Pond home during the spring and summer months.

They stand 29-36 inches tall, all black with an orange-yellow throat patch. They have long tails and four toed web feet. They mostly eat small fish, but will not pass up a tasty crawfish or crustacean when presented with such an opportunity. Their range covers most of the northern U.S and southern Canada from coast to coast, but have been seen as far south as Mexico. When Cormorants feed, they dive under water and propel themselves using their wings in a flying fashion and kick with their web feet. Their downward hook bill latches onto the fish to ensure that it will not be “The one that got away.” On land they waddle taking small steps and swaying side to side but on and in the water is where they shine. The only sound audible to the human ear that a Cormorant makes is a pig-like grunt which has caught the attention of many anglers coming through the early morning fog hanging over the lake. Unlike duck and geese, the cormorant’s feathers are not waterproof. After a swim they can often be seen with wings spread out drying them in the sun which makes them look even larger.

Anglers tend to dislike the Cormorants, blaming them for eating all the sport fish, but in reality the opposite is true. Cormorants tend to feed on the slower, injured, or dying fish. According to Mr. Salazar, “They also keep the ponds tidy by cleaning up all the dead fish.” Thus, with all the work that they do with efficiency, they actually help the anglers and keep the waterway healthy.

Nesting materials are usually sticks and aquatic plant material on a rocky cliff ledge or a tree up to fifty feet off the ground, but just like most interior decorators, cormorants like a little bling in their place. Some nests have been found with pocket combs, bobby pins, and even plastic cutlery. The female will lay 2 to 9 chalky blue eggs with the male and female incubating those eggs about 25 days. An elaborate ceremony is performed whenever they change off the incubation duties. According to the 1990 Birds of North America by Reader’s Digest, “It is one of the most elegant, appealing rituals in the avian community.”

These birds have been used by Japanese fishermen for centuries to catch fish for human consumption. The fishing is done by placing a ring around the bird’s neck so that it cannot swallow the fish it catches. The cormorant then swims back to the boat, where the fisherman removes the fish from its mouth and sends it out again. This is no longer an economical way to fish, so it is not done anymore. But it is still done in the Imperial household for its cultural interest and as a tourist attraction. (Clear Creek Current)

So the next time you drive past or visit Kriley Pond and someone asks you, “What are those big birds?” You can answer with confidence, “Those are Cormorants or Willets, a fascinating bird with an interesting story.”

END_OF_DOCUMENT_TOKEN_TO_BE_REPLACED

Benefitting the county, schools, and much more By Don Ireland   This year marks the 30th anniversary of casinos opening in the former little mining towns of Black Hawk, Central City and Cripple Creek, Colorado. In those early years, smoking was allowed inside ... END_OF_DOCUMENT_TOKEN_TO_BE_REPLACED