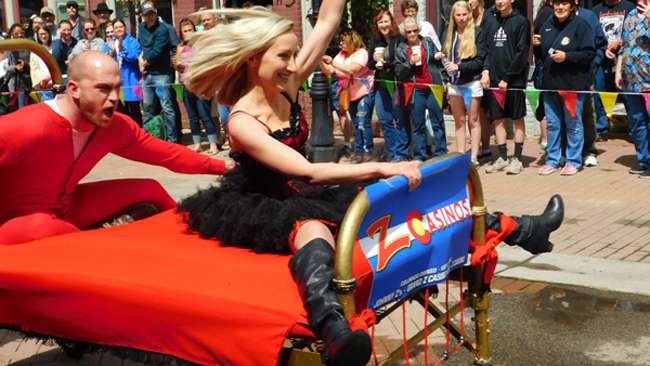 The rain came bursting forth from dismal cumulonimbus clouds in Central City the afternoon of Saturday, June 15, but neither rain, nor sleet, nor cold can stop the tyranny of the Wild Bunch Gang. The 45th Annual Madam Lou Bunch kicked off its sultry celebration with a gun fight on the south side of Main Street. “I don’t think I’ve ever been so wet,” said Tom Matthews, one of the survivors of the gunfight and undertaker for the Wild Bunch Gang, but the show must go on. And go on it did as the sun pierced through the dark-slate-gray clouds shutting off the rain for the remainder of the afternoon.

Businesswoman Louisa (Lou) Bunch came to Central City in the late 1800s to help fulfill a perceived need for the many male minors digging up their retirement plan from the dark tunnels of Gilpin County; the need for entertainment of a more intimate kind. Bunch managed four sporting house girls and developed a reputation for great customer service, but when a deadly epidemic swept through the area, she halted the entertainment services and transformed her house of ill repute to a house of care. Lou and her ladies took such good care of the sick that the town now honors her selflessness with a day of bed racing, dancing, gun fights, and a parade.

Every year teams compete for the best time in a race down and up Main Street in a large brass bed on wheels. The cobbled street challenges the bed-pusher and often racers find themselves heading for the sidelines and sometimes turned completely around. Teams are comprised of at one woman who stays on the bed and two men who take turns riding in the bed and pushing it with all their testosterone induced machismo. Eleven teams attempted the oddest race in Colorado: Saratoga Casino, JKQ BBQ, Bonanza Casino, Johnny Z Casino, Roddy America, Luck ‘O the Irish, Lucky Lynches, Century Casino, Main Street Central City, Grand Z Casino, and the Central City Opera. Prizes were awarded for the top three best times, Worst in Bed (worst race time), Maiden Voyage (youngest aggregate racers), Old Farts (oldest aggregate racers), and Best Costume.

Recognized First Place – Main Street Central City (as organizers of the event; they were disqualified from winning)

The 2019 Lou Bunch Day’s typical red and brown color scheme was infiltrated by an abnormal amount of green thanks to the Lynch Family Reunion. The Lynch family holds a reunion every two years typically in northeast South Dakota, but local Lynch members convinced their relatives to reunite in colorful Colorado. The family’s adventures included a pancake breakfast, fishing derby, and three bed race teams.

Central City was also graced by the rare appearance of Cousin Jack sporting oversized protective goggles, a miner’s helmet, and nondescript overalls. Cousin Jack performed a song he wrote about Lou Bunch accompanied by ukulele exclaiming “She was born Louisa, but everyone called her Lou.”

The Lou Bunch Day cumulates in Madams and Miners Ball where folks dance in the street fully regaled in Victorian accoutrements and awards are handed out for Dandy Dan and Madam of the Year. God must have had enough of Lou Bunch Day, though, because once more the fury of skies was unleashed, and the downpour made it impossible for the band to play. The rest of the evening was cancelled.

If you missed out on the fun, Main Street Central City would love to see you racing in the 46th Annual event in 2020. Lou Bunch Day is just one of many events in Central City this summer. You can get your fill at Stills in the Hills on June 22, the Great Central Beer Fest on August 24, or thrill to the classic engines of the Hot Rod Hill Climb on September 13.

END_OF_DOCUMENT_TOKEN_TO_BE_REPLACED

Where the dead get to tell their story By Jaclyn Schrock On Saturday, August 21, the Gilpin Historical Society held their annual Cemetery Crawl. Tickets allowed the shuttle of hundreds of guests from the Teller House parking lot to the Cemetery. Depending on v... END_OF_DOCUMENT_TOKEN_TO_BE_REPLACED