We are the mighty Eagles 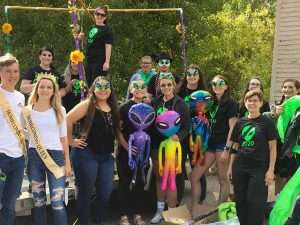 Gilpin County School celebrated Homecoming recently. To kick off the week students dressed as senior citizens on Monday and Twins on Tuesday. Canes and robes slowed students down, but to reclaim their youth they wore wacky shirts and socks as well as black on Wednesday and Thursday. The excitement continued as students and teachers faced off in a series of games at the pep rally. Students won by a landslide, but the real rivalry was between the classes. The competition was settled when sophomores won the tug of war game, another Gilpin tradition. As usual, cheerleaders did a rendition of “Funky Chicken” and a one of a kind dance. Next Joleen Slack cheer captain, announced Gilpin High School Royalty. Congratulations to Hannah Donaldson as Countess, Brandon Robinson as Count, Callie Ralstin as Duchess, Will Hunt as Duke, Brookelyn Purser as Princess, and Blake Boulter as Prince. Most of all, congratulations to Queen Bailey Hobson-Kroll, and King Tyler Branning. After the pep rally, high school volleyball won vs Front Range Christian 24-26. They won all three games that they played proving Gilpin’s integrity in the classroom and on the court. With renewed spirit, students went home feeling pumped just in time for the annual parade.

At 3 p.m. on Friday the parade began. Fire trucks and police cars led the parade down Central City streets. Middle Schoolers followed sporting homemade t-shirts. The Marti Gras theme became clear as students reveled on festively decorated class floats. Candy was in the plenty, but only 4-5 pieces were actually thrown because students needed a sugar boost. Children of all ages ran for the candy on the streets, leaving them spotless. The parade ended in the Z Casino parking lot in Black Hawk. After helping clean up, students headed up the hill to the school for the annual homecoming football game. The game featured old friends, hot chocolate (compliments of the concession stand), and the Chili Cook-Off while football players fought the game on the field. During half time, the Peewee Cheerleaders performed various songs and dances. Their matching t-shirts and charming dance moves blew the crowd away. Homecoming Queen Bailey Hobson-Kroll and King Tyler Branning where honored again at this nostalgic event. In the end, the Gilpin Eagles gave it their all but they lost a close one, 36-28.

After a late night, students slept in Saturday morning, but on Saturday evening they got their groove on at the High School Homecoming Dance, a perfect way to end homecoming week. The dance ran from 7-10 p.m. in the school cafeteria which was covered in beautiful decorations. Thanks to an amazing DJ, good food and friends, students did not stop dancing. That is until High School Royalty took over the dance floor for slow dance’s. Students danced to songs such as “Sweet Caroline” in the last moments of homecoming. After such a successful week, students went home with a positive attitude and a smile.

END_OF_DOCUMENT_TOKEN_TO_BE_REPLACED

Benefitting the county, schools, and much more By Don Ireland   This year marks the 30th anniversary of casinos opening in the former little mining towns of Black Hawk, Central City and Cripple Creek, Colorado. In those early years, smoking was allowed inside ... END_OF_DOCUMENT_TOKEN_TO_BE_REPLACED

Benefitting the county, schools, and much more By Don Ireland   This year marks the 30th anniversary of casinos opening in the former little mining towns of Black Hawk, Central City and Cripple Creek, Colorado. In those early years, smoking was allowed inside ... END_OF_DOCUMENT_TOKEN_TO_BE_REPLACED