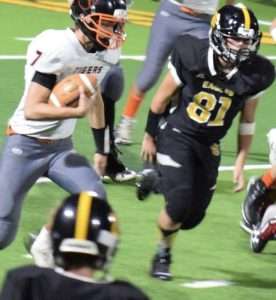 Last Friday’s football game marked the Eagle’s homecoming and was their first league game this season. The game took place on our home field under the lights against the Hayden High School Tigers. After receiving the initial kickoff, the Hayden Tigers put together an 8-play, 50-yard drive to score the first TD of the game followed by a 2-point conversion. On the Eagles first play of their first possession Stephen King (2), from the QB position, ran the left edge for a TD followed by a 2-point conversion tying the score at 8 to 8. The Tigers responded with a 6-play, 57-yard TD drive and 2-point conversion. Not to be outdone, on the second play of their next possession, the Eagle’s King (2) ran 69 yards down left edge for another TD. The Eagles unsuccessful 2-point conversion attempt ended the 1st quarter with a score of Hayden 16 to the Eagle’s 14.

On the first play of the 2nd quarter, Boulter (19) completed a 59-yard TD pass to King (2) followed by a 2-point conversion run up the middle making the score Eagles 22 to Hayden’s 16.  At the following kickoff the Tigers were stopped on their own 10-yard line. After struggling back to their 28-yard line the Tigers fumbled the ball, which was recovered by the Eagles. Eight plays and two 1st and 10s later King (2) carried the ball from the Tiger’s 5-yard line into the end zone for another TD making the score 28 to 18 in favor of the Eagles. The rest of the half consisted of both teams defensive play stopping any further scoring.

Following the first play of the 2nd half of the game the Eagle’s King (2) was ejected from the game, which left the team, short a running back/receiver for the remainder of the evening. Each team held the ball for four more drives, but both teams were denied further scoring for the rest of the 3rd quarter.

Eagle’s coach Craig Ball commented that we had a two-touchdown lead going into the half and we were definitely on a roll with our offense. We used some plays like our Kit Kat Black Jack, Viking Dice, and Badger Dice to score four TDs in the first half. We caused two fumbles and recoveries that helped us build the lead. We had an important player miss the second half. Coach Ball Said: “I didn’t make an adjustment soon enough as the game went on to make sure we were in the best position to keep the lead. There was so much excitement in the stadium and the largest crowd that I can ever remember at a Gilpin Football Game. I needed to refocus our team to take advantage of our strengths and I was just too slow to adjust. We ended up making three turnovers in the second half, one being a scoop and score for the other team. That score off of our turnover turned out to be the difference-maker in the game. We will learn from our mistakes and be ready to take on Soroco in Oak Creek on Friday Night.”

The Eagles next game will be played in Oak Creek, CO against the Soroco High School Rams on Friday, September 27 at 6:00 p.m.

END_OF_DOCUMENT_TOKEN_TO_BE_REPLACED

Benefitting the county, schools, and much more By Don Ireland   This year marks the 30th anniversary of casinos opening in the former little mining towns of Black Hawk, Central City and Cripple Creek, Colorado. In those early years, smoking was allowed inside ... END_OF_DOCUMENT_TOKEN_TO_BE_REPLACED

Where the dead get to tell their story By Jaclyn Schrock On Saturday, August 21, the Gilpin Historical Society held their annual Cemetery Crawl. Tickets allowed the shuttle of hundreds of guests from the Teller House parking lot to the Cemetery. Depending on v... END_OF_DOCUMENT_TOKEN_TO_BE_REPLACED