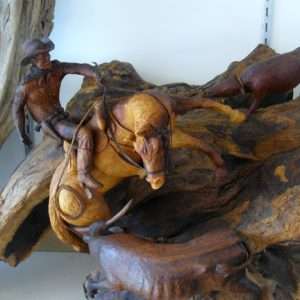 Patrons of Gilpin County Public Library (GCPL) know to take a look at the big glass display case in the lobby, just to their left as they come in the main entrance. That’s where GCPL puts the work of some of Gilpin County’s most talented artists on exhibit. Currently, that’s the work of woodcarver extraordinaire, Walter Perryman. With titles like “Bear Hunter,” “Collision Course,” and “Rescue,” each of Perryman’s intricately carved tableaus tells a story. In fact, each piece tells more than one story, in intricate “How’d he do that?” detail. In “Rescue,” for example, there’s the calf’s story, the cowboy’s story, the horse’s story and the mama cow’s story. Perryman has conveyed the emotion in each figure and combined their stories into one fluid moment in time. He favors western themes, mountain men and wildlife, and that’s the GCPL exhibit theme; but Perryman has carved other subjects, too. His carvings are sometimes a single subject and smaller in size, but also range to larger standing pieces. Many of those at GCPL are in the dimension of around 18 inches – easily displayed on a shelf or tabletop.

As an adult, carving was a hobby, something he did in his spare time, Perryman explained. He’d gotten started in junior high school, carving soap and doing a little whittling. His first real carving project in wood was a Santa’s helper elf, with beard and cap, which he saw in an art book provided by his art teacher. The teacher said it would be “too hard for me” Perryman, said, which just made him more determined to accomplish it. That meant starting with a block of wood, whittling away the excess to shape his elf, and then smoothing and painting it. “My teacher put it on display on her shelf,” he said, “She may still have it.” He found he enjoyed carving “little things” with his pocket knife and giving them away and he continued to build his skill as he grew up. An American Indian headdress that he carved as a Boy Scout neckerchief slide won him first prize. (The prize for continuing to carve “little things” out of soap, was getting his children into the bathtub.)

Perryman said he gets his inspiration from things he sees or reads. That’s the hardest part of the process, he declared, “deciding what I want to carve.” “I like telling stories when I carve something. I think of a good story and try to figure out how to do it.” Once he’s got an idea of what he wants to carve, he researches the anatomy of the animals or people he will be carving. For “Bear Hunter,” Perryman’s son, Jeff, then in high school, donned his swimming trunks and posed, “attacking” the garage door with a broom. Perryman studied and transformed what he saw. In the carving, the trunks became a breechcloth; the broom, a spear; the face, Native American; and the garage door, a ferocious bear. With all of his pieces, Perryman must hone his inspiration to meet the story he wants to tell, working out the size and placement of the figures he’ll carve by first modeling them in clay. He uses power tools to cut away the excess wood and “get close to the skin,” he says, and then switches to the standard carving tools. Each one takes about a month to do, from clay to wood, he reckoned. Perryman favors walnut in his carvings – “a good hard wood, but not as hard to carve as oak.” He likes maple for the color and the grain. He often gathered driftwood from the Oregon coast to use as bases for his work, and says yew also makes a good base because it’s really hard. Carving the base just right creates the environmental background for the figures he’ll add later, and becomes integral to the story.

Perryman is a Colorado native, having grown up in Lakewood, graduating high school in 1954 and Colorado School of Mines in 1959. He worked for the United States Forest Service as an engineer in Oregon for some 30 years, then returned to finish his USFS career in Colorado. He moved to Gilpin County in 2001. Many Gilpinites know Perryman. He’s been active in the community, including serving many years on the Colorado Sierra Fire Protection District’s Board of Directors, but his skill as an exceptionally creative wood carver came as a surprise to all but those who know him well. He hasn’t displayed his work locally, although he had routinely entered his work in galleries and exhibits in Oregon, including the state fair. His work was a staple at the Williamette Western Art Show and Auction in Salem, Oregon’s summer show.

“I sold quite a few pieces,” Perryman says, but adds that he never got into it to the level needed to gain fame and fortune. Most of his work would sell in the range of $1,000 – $3,000, he figured. Although his western-themed work is a favorite, Perryman’s inspiration is broader and diverse. He carved a scene of Antonio Stradivari making his last violin, describing it as the master violinmaker “at his work table, thumping the violin to check the sound.” Then there’s a large standing piece called “Conan the Captive Barbarian” that he carved of the fantasy sword warrior who became the focus of comics, books, television shows and movies. In that carving, Conan has a beautiful female cohort chained to him while his evil captor sits nearby.

Over the years, Perryman figures he’s given away hundreds of his carvings “I don’t even know how many,” he said, shaking his head. Prior to this limited exhibit at GCPL, his last show was in 1985. He collaborated with a wildlife painter at the time. She did a wildlife painting and he added a carved mount of the same animal, creating unique three-dimensional pieces. He’s included the similar singular mounts in his GCPL exhibit. Perryman still “whittles a little” he says, then pauses to consider whether he should start carving again. “I like people saying, ‘Wow’ – I like to show off,” he confessed with a grin.

Perryman is a regular visitor to GCPL – likes “detective stories” and named Grisham and Patterson as a couple favorite authors. It was in a casual conversation with Library Director Larry Grieco that Perryman’s carvings were discovered, at least here in Gilpin. “Bring one in,” Grieco had told him, and that led to the unique display in the case. Perryman’s carvings will be on exhibit through February. It’s worth a special trip to GCPL just to see and wonder at the technique, skill and creativity of this special Gilpin County artist, and the result (which should please Perryman no end) has been a whole lot of “Wow’s!”

END_OF_DOCUMENT_TOKEN_TO_BE_REPLACED

Where the dead get to tell their story By Jaclyn Schrock On Saturday, August 21, the Gilpin Historical Society held their annual Cemetery Crawl. Tickets allowed the shuttle of hundreds of guests from the Teller House parking lot to the Cemetery. Depending on v... END_OF_DOCUMENT_TOKEN_TO_BE_REPLACED