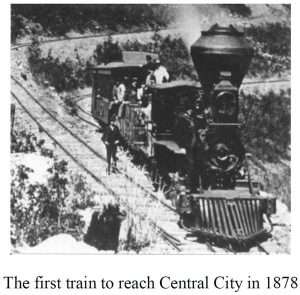 Getting to and from Black Hawk and Central City today is relatively easy with wide, oftentimes well-lit paved roads brining drivers in the heart of Gilpin County, but the earliest miners arriving in Gilpin County had to follow a route that Joseph Casto, one member of John Gregory’s group in 1859, called “almost impracticable.” Miners could take only light loads and often had to double-team their wagons.

The travel situation dramatically changed for the better with the introduction of wagon roads, with several in place by the beginning of 1860. Most of the roads followed Golden Gate Canyon between Golden and the diggings. Once the wagon roads were completed, stage lines began running passengers back and forth between “civilization” and the mining camps.

One advertisement in the February 15, 1860 Rocky Mountain News stated that the Shoup,

up passengers and mail each morning in Denver, Auraria, and Highland and deliver them to

Builders continued to construct new wagon roads well into the 1870s, even though the train

had arrived in Black Hawk in December 1872. Planning for the railroad began in 1870, after the

Colorado Central completed its line from Golden to Denver. W.A.H. Loveland was responsible for the line, and he and his associates decided that following Clear Creek Canyon was the best route. As part of the bargain, Gilpin County had to approve $250,000 in bonds to help finance

construction; the voters did so on August 31, 1871. By the end of that September, more than 300 men were at work grading the new roadbed. For the first two months, Fredrick Grant, son of Ulysses S. Grant, was in charge of the crew. By December, the crew had reached Huntsman’s Ranch and was ready to lay track to that point. In January 1872, a crew of 250 men began grading the stretch between the Forks (the present-day intersection of Highways 6 and 119) and Black Hawk, while in July another crew finished the 1,500 feet that remained to be graded between Huntsman’s Ranch and the Forks. That same month, workers began laying track for the new railroad and the first narrow-gauge engine reached the forks in September 1872. When the track was finally completed and the first train reached Black Hawk in December of that year, residents hosted a number of parties, including a Grand Railroad Ball on December 27.

It took another six years, however, for the train to reach Central City, just one mile away as work did not resume on the Colorado Central line until July 1, 1877. With Central City almost 500 feet higher in elevation than Black Hawk, workers laid four miles of track back and forth in a continuous series of grades to get up the hill. The line finally opened on May 20, 1878, and was met with much celebration, including cannon fire, bands, and cheering crowds. Two trains a day ran between Central City and Golden in the beginning, but by 1928 that had been reduced to three freight trains a week with a passenger coach attached. By 1930, highways were becoming the latest way to get to Black Hawk and Central City.

Route 119 (now Highway 119) was the first highway to reach Central City and Black Hawk in the 1920s. Reaching from Idaho Springs to Boulder, the road followed the Virginia Canyon road (better known as the Oh My God Road) into Central City. After the Central City Opera House reopened in 1932, opera goers followed this route to reach Central City. Prior to a performance, police would station themselves at each end of the road in order to make it a one-way road into Central City; at the end of each performance it became a one-way road out of town. In 1938, planners rerouted 119 through Clear Creek Canyon, where it met with a portion of U.S. Highway 6.

Highway 6 initially followed Mount Vernon Canyon, but in 1952 a new stretch between Golden and Idaho Springs opened that followed the old Colorado Central route through Clear Creek Canyon. Planners had first set their sights on building through the canyon in 1933, but ran into several problems. The town of Vail, for example, wanted to widen U.S. 40 rather than build U.S. 6, and Denver Mayor Benjamin Stapleton wanted to use Clear Creek Canyon for reservoirs. Construction finally began in 1937, but the road ran into several delays, in part because the highway needed to use the railroad route, which would not be abandoned until 1941. By that year, however, several tunnels were built before World War II brought construction to a halt. Construction quickly resumed after the war’s end in 1945, and by 1950 all but five miles of U.S. 6 through the canyon had been paved. U.S. 6 through Clear Creek Canyon officially opened on June 28, 1952.

The latest chapter in the quest to reach Gilpin County came in 2004 with the opening of the Central City Parkway. The eight-mile long road connected Central City to I-70 in an effort to shorten the driving time required to reach the town, and to attract more people. Buddy Lazier, winner of the 1996 Indianapolis 500, traveled the road in three minutes as part of the official opening ceremonies on November 19.

END_OF_DOCUMENT_TOKEN_TO_BE_REPLACED

Benefitting the county, schools, and much more By Don Ireland   This year marks the 30th anniversary of casinos opening in the former little mining towns of Black Hawk, Central City and Cripple Creek, Colorado. In those early years, smoking was allowed inside ... END_OF_DOCUMENT_TOKEN_TO_BE_REPLACED

Where the dead get to tell their story By Jaclyn Schrock On Saturday, August 21, the Gilpin Historical Society held their annual Cemetery Crawl. Tickets allowed the shuttle of hundreds of guests from the Teller House parking lot to the Cemetery. Depending on v... END_OF_DOCUMENT_TOKEN_TO_BE_REPLACED