Volunteers have a heart for service 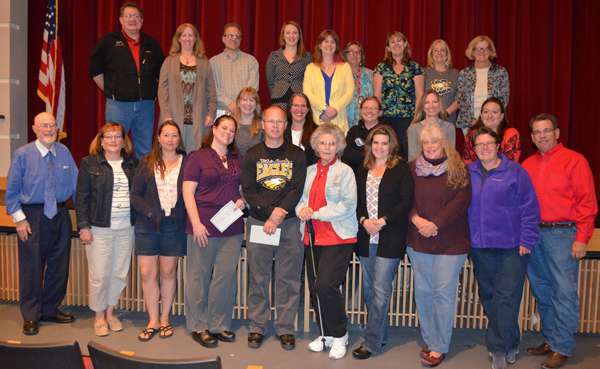 Gilpin County School held a reception on Tuesday, May 24, to express appreciation to the many volunteers who helped the school function and who provided extra services for the students and staff over the past year. About 40 of these valuable helpers attended.

“We’re here to celebrate volunteerism at Gilpin,” said Superintendent David MacKenzie, acknowledging that those who served did so simply for the desire to be of help, without thought of reward.

MacKenzie, who has been superintendent for the past three years, said that one of the things that impressed him when he was considering coming to Gilpin was the school website’s information on the many parent volunteer groups. But he didn’t have the full picture until he actually came and saw everyone in action.

Leaders from the various organizations summarized their group’s activities, introduced their members, and invited others to join.

All volunteers are listed at the end of this article.

Board President Craig Holmes reported, “I’ve been fortunate to work with a great group of volunteers on the Board. They believe in putting the kids first.”

He also praised the assembled group of helpers by noting, “You are the backbone of what makes the school tick.”

The volunteers’ importance prompted Holmes to fill them in on upcoming plans. First, he recalled that seven years ago the school district began receiving revenues generated from a dedicated 1.5% Black Hawk sales tax, called the Educational Enhancement Tax. At the time, the district was in the bottom ten percent of Colorado schools in funding. Now, Holmes said, “we are in the top ten percent.”

To highlight planned site improvements, he and MacKenzie showed several conceptual display boards prepared by architect Randy Look. Projects include doing some blasting at the football field area, adding a track around the field, paving all the parking lots, enlarging the elementary playground, adding another ingress-egress as part of the school’s safety plan, constructing a new stairway going from the atrium to the upper parking lot, building an addition to the old gym, and adding a shed roof to the side of the bus barn, among other work. The school board and administration hope to get the blasting done this summer and anticipate that the various projects will take 14 months to complete.

Holmes made the welcome assertion, “We have the funds – we don’t need to go to the taxpayers.”

He cited recent academic accomplishments, as well. In the past three years, since the Board hired MacKenzie as superintendent, high school students have scored above the state average on ACT tests, and nearly 90 percent of elementary students are at or above grade level.

Holmes is also president of the Gilpin County Education Foundation (GCEF) and was pleased to announce a vocational opportunity for students through a GCEF project. The new Eagles Mart store is to open within the next couple of weeks in Black Hawk. The store is owned by GCEF, the City of Black Hawk has donated the space, and Gilpin school employees will supervise the students as they gain real-life experience and class credit by working at the store. Holmes predicts that the store will generate $50,000-$60,000 per year for scholarships and funds for classrooms.

Gigetta Nadeau, Gilpin Booster Club president, related that the club had worked at the school every night for the previous two weeks, preparing and serving banquets for various awards programs. She thanked members Jack and Lisa Kennedy for the hard work they did on the concessions. Brook Ramsey was thanked for coordinating a large group of parents to put on the after prom party.

The many other services provided by the Boosters included middle school dances, homecoming, and scholarships for graduating seniors.

“I never have to beg for help,” Nadeau declared. “These folks are all here at the drop of a hat.”

The District Accountability Committee (DAC) was headed up by Dick Vickery. District accountability committees are mandated by the Colorado legislature and comprised of school administrators, teachers, parents, and community members. Gilpin’s DAC holds open meetings monthly during September through May and is responsible for overseeing the district’s accreditation plan and budget and making recommendations to the school board. The DAC also consults on such matters as teacher evaluation, the gifted and talented program, and nutrition and wellness.

Curt Halsted heads the art department. He updated the audience on the many artistic endeavors at the school, including the Artsonia online gallery, the art timeline wall, and the after school Art Factory club.

“Without our volunteers, these couldn’t happen,” he said.

Halsted is also the co-director of the theater department, along with Hannah Raynes. He spoke of the goals to integrate theater more in the elementary school and to align theater curriculum to art and technology.

Director Hannah Raynes related, “Our goal is to make this a phenomenal department. Without the volunteers, it’s not possible. They spend so many hours doing marketing, t-shirt sales and ticket sales, making costumes, coordinating props. It’s like building a small city over three months.”

59 elementary students and 37 middle/high students were involved in this year’s production, which required lots of parental help.

After prom is the Booster Club’s biggest project. “It’s so big that it’s almost a separate entity,” stated Nancy Larson, who presented the after prom thanks. “The purpose is to give the kids a safe, fun activity to go to after prom is over. This year was our single most successful after prom. There were no incidents, and everybody came.”

She especially thanked School Resource Officer Lee Ramsey, who did all the clean-up when the party ended at 4:00 a.m. When the clean-up crew arrived, it was a welcome surprise to find that the work had already been done.

District secretary Michelle Welch gave a tribute to community member Billie Bishop, who cares for the flowers and plants that folks see when they come into the building. “Last year she was not able to drive, so she hitched rides or walked in order to do this, and she even comes in the summer,” said Welch.

MacKenzie acknowledged those who helped with Montessori fundraisers; with the PTA’s Trick or Treat Street book fairs, holiday shop, and meals during testing; as classroom volunteers; as chaperones for activities; with the outdoor education program; in the elementary library; with the computer club; and with athletics. He also mentioned Lee Ramsey for doing landscaping.

He thanked secretaries Gretchen Sechler, who coordinated the evening’s reception, and Michelle Welch for all she does.

“You are our best communicators,” he concluded. “Go out and communicate what a great school we have and what great support we have. We always need people. There are many more opportunities!”

END_OF_DOCUMENT_TOKEN_TO_BE_REPLACED

Benefitting the county, schools, and much more By Don Ireland   This year marks the 30th anniversary of casinos opening in the former little mining towns of Black Hawk, Central City and Cripple Creek, Colorado. In those early years, smoking was allowed inside ... END_OF_DOCUMENT_TOKEN_TO_BE_REPLACED

Where the dead get to tell their story By Jaclyn Schrock On Saturday, August 21, the Gilpin Historical Society held their annual Cemetery Crawl. Tickets allowed the shuttle of hundreds of guests from the Teller House parking lot to the Cemetery. Depending on v... END_OF_DOCUMENT_TOKEN_TO_BE_REPLACED