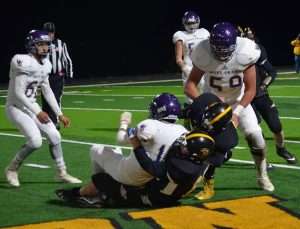 The Gilpin Lady Eagles varsity volleyball squad had a busy time of tournament matches October 23-27, coming in with victories over Front Range Christian and Clear Creek. Gilpin headed into the post-season round robin games with a 7-12 record, 4-8 in league action. They boosted their overall record to 9 wins with the 2 tournament triumphs.

Front Range has a season record similar to Gilpin’s, coming in with an 8-15 tally, 3-9 in league play, and the game was close with these well-matched teams. Set scores were 25/19, 25/18, and 25/20. Standouts for Gilpin included Nicole Adams with 11 kills, Bailey Hobson-Kroll with 18 digs, Sarah Trujillo with 19 assists, and Jasmine Crook-Arends with 16 serve receptions. Courtney Holmes contributed a serving ace, and Adams also put in a solo block.

Clear Creek’s record is 7-16, 4-8 in conference work. The Golddiggers were notable for — what else? — digging. Zada Taylor got in 34 of 84 total digs for Clear Creek. They improved a bit with each set, and overall had better stats than Gilpin. But the Lady Eagles had it where it counted in the end.

Gilpin was disappointed in its bid for victory in two other tournament games, taking a 3-1 loss to Heritage Christian in Ft. Collins on Tuesday, October 23 and bowing 3-0 to Dayspring Christian Academy at Greeley on October 25.

Football wasn’t for cowards at Gilpin High School this season. The Gilpin Eagles finished their last regular season football game with a tough 48-14 loss to the Mustangs of West Grand (Kremmling) on Friday, October 26, at home. It’s been a lean season for the Eagles, who were unable to post a win against older, more experienced teams. Team members, coaches, and parents feel that although there have been many disappointments, it has been a season to be “forged by adversity,” as the team motto states. They believe next year will definitely go better.

The seniors and their families were recognized prior to kickoff. Football players were Jaime Alexander, with his father Zack Hancock and mother Starla, Angel Gomez with his mother Lupe Correa, and Daniel Jewell with his step-mother Michelle Hernandez. Chance Griffin-Williams and his family members were unable to be present. Cheerleader Anna Yocom and her parents, Cheer Coach Katie Yocom and Jerry Yocom, were also honored.

Gilpin had some good moments in the West Grand battle. The Eagles were able to hold the Mustangs scoreless during the entire second half.

It was also special to have senior #50 Jaime Alexander named as Gilpin’s Defensive Player of the Year. During the season, he achieved 36 solo tackles and 11 assisted tackles, for a total of 47 tackles, including 10 tackles for a loss (45 yards); one sack for a loss of 8 yards, 2 hurries, 1 fumble caused, and 1 fumble recovered.

Junior #99 Jessie Alexander took the honors as Defensive Player of the Game with West Grand. He made 2 tackles, including 1 tackle for a loss, and recovered 2 fumbles.

Sophomore #18 Stephen King was able to intercept a West Grand pass during the first quarter and to cut through the Mustang phalanx for a 40-yard run in the second period.

END_OF_DOCUMENT_TOKEN_TO_BE_REPLACED

Where the dead get to tell their story By Jaclyn Schrock On Saturday, August 21, the Gilpin Historical Society held their annual Cemetery Crawl. Tickets allowed the shuttle of hundreds of guests from the Teller House parking lot to the Cemetery. Depending on v... END_OF_DOCUMENT_TOKEN_TO_BE_REPLACED

Where the dead get to tell their story By Jaclyn Schrock On Saturday, August 21, the Gilpin Historical Society held their annual Cemetery Crawl. Tickets allowed the shuttle of hundreds of guests from the Teller House parking lot to the Cemetery. Depending on v... END_OF_DOCUMENT_TOKEN_TO_BE_REPLACED