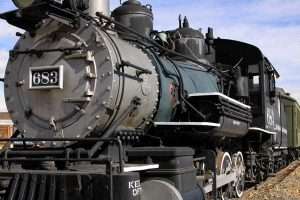 As soon as the last spike was driven completing the transcontinental railroad at Promontory Summit, Utah Territory, in 1869, it represented a monumental technological achievement and was a source of national pride. Connecting San Francisco to Council Bluffs, Iowa, and points eastward, it provided a vital economic link facilitating further settlement of the American West at an unprecedented pace. By land, arduous and dangerous wagon trains out of Omaha were one of travelers’ only options to the west coast before the transcontinental railroad. By sea, it cost $1,000 and six months to sail around Cape Horn, South America, to California from New York City. If one wanted to risk contracting yellow fever, the Isthmus of Panama (long before the existence of the Panama Canal) was another undesirable choice. By train, a person could now travel from the Atlantic to the Pacific for as little as $65 in only a week’s time.

When it was decided to route the transcontinental railroad through Cheyenne, Territory of Wyoming, it left Denver out of the loop. Vice President Thomas Durant of the Union Pacific Railroad proclaimed Denver “too dead to bury.” Colorado Territorial Governor John Evans declared that “Colorado without railroads is comparatively worthless.” On June 26th, 1870, the Denver Pacific Railroad filled the gap between the two cities and the rest is Colorado railway history.

In a tangible sense, if not for people like Robert W. Richardson much of that history would be lost. When Colorado narrow gauge railroads began to go bankrupt in the 1940s because of falling ore prices and increased operating costs, Robert started buying up the no longer viable locomotives, freight and passenger cars, and cabooses. At first he was based in Alamosa, then in 1959 he partnered with fellow train enthusiast, Cornelius Hauck, and relocated his collection to Golden, CO, forming the Colorado Railroad Museum.

Originally founded with fifty pieces, there are now 140 units of rolling stock presently displayed beneath North Table Mountain on their sprawling 15 acre rail yard. The 1880 Denver Leadville & Gunnison No.191 locomotive ran gold and silver ore, coal, timber, and goods from Denver to Central and Southwestern Colorado and back. It is the oldest surviving narrow gauge steam-powered locomotive in Colorado. Bested by merely a year in age, Denver & Rio Grande Western No. 346 is the oldest operating steam locomotive in the state. It was rebuilt in 1936 after a runaway wreck on Kenosha Pass. The most massive operating steam engine of the narrow gauge class in the yard is Denver & Rio Grande Western’s No. 491. Returned to service with much fanfare on August 28th, 2014, its operational weight is 187,250 pounds (307,250 lbs. fully loaded) – heaviest of its kind in the Western Hemisphere. Manitou & Pike’s Peak No.1 is an oddity equipped with a toothed cog wheel designed to negotiate grades up to 25 degrees. Built on an automobile frame and self-leveling, Galloping Goose No.7 may be stranger yet, said to resemble a waddling goose when its swaying freight box was viewed from behind.

Continually featuring special events during the year, March is “Paddy on the Track” month at Colorado Railroad Museum honoring the heritage and history of Irish Americans and their role in the building of the transcontinental railroad. To show Colorado Railroad Museum’s appreciation for ongoing public support and coinciding with “Ride the Rails Saturdays,” on March 7th all visitors will be admitted for free.

END_OF_DOCUMENT_TOKEN_TO_BE_REPLACED

Benefitting the county, schools, and much more By Don Ireland   This year marks the 30th anniversary of casinos opening in the former little mining towns of Black Hawk, Central City and Cripple Creek, Colorado. In those early years, smoking was allowed inside ... END_OF_DOCUMENT_TOKEN_TO_BE_REPLACED