Visiting a Maasai village in Kenya 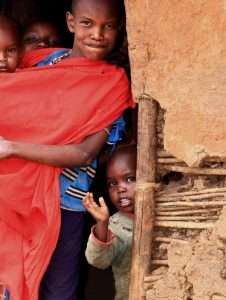 My visit to a Maasai village eight years ago was one of the highlights of my safari to the Masai Mara, Kenya. After miserably failing to achieve fire, I wandered about snapping a few photos when I noticed a teenage boy holding a baby inside the doorway of their hut. A girl stood behind him and a small boy squeezed past his brother’s leg to get a better look at the camera-toting stranger. I then crouched low on one knee, cocked my head forward, smiled, and waved to the small boy to recognize him in particular. When he waved back, I felt I had made a connection, if not just for a moment.

Returning to the same village in April, 2019, I brought a picture of the four children to present as a gift. I was curious to see how they had changed and was hoping to get a group portrait again. When I handed the photo to a Maasai elder, all of the warriors gathered around for a better look at it. Flattered at their reaction, I would later learn the reason for their great interest. Eventually everyone in the village would see the picture before it came to rest in the hands of the children’s father.

The name of the boy who waved in that shot is Shadrack. He is now twelve years old, attends school, likes to draw, and enjoys playing football (soccer). His older sister (Shuumbai) is nineteen and married. The baby of the grouping (Dennis) is nine years old, and like Shadrack is an artist. The oldest boy, holding Dennis in the photo, is named Rimoine. Fourteen years of age in the picture, much is expected of the eldest who play an important role in the family. Three years ago while swimming in the Mara River with friends, he was pulled under the water by a crocodile and never seen again.

Many of the father and mother’s hopes and dreams now rest with Shadrack. Shuumbai and Dennis were unavailable for pictures so that obligation also fell to Shadrack. Somewhat shy because of all the unexpected attention he was receiving, through a translator, I was able to coax another wave from him.

END_OF_DOCUMENT_TOKEN_TO_BE_REPLACED

Benefitting the county, schools, and much more By Don Ireland   This year marks the 30th anniversary of casinos opening in the former little mining towns of Black Hawk, Central City and Cripple Creek, Colorado. In those early years, smoking was allowed inside ... END_OF_DOCUMENT_TOKEN_TO_BE_REPLACED