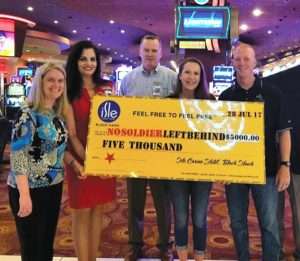 Isle of Capri Casino supports No Soldier Left Behind

This week we honor our Veterans – men and women who have dedicated their lives to protecting our country.  Many of these soldiers come back to their homes wounded in mind and spirit. PTSD, (Post-traumatic stress disorder), TBI (Traumatic brain injury), Sleep Disorders, Anxiety and Depression are just a few results of war.  The VA and insurance companies offer standard medical treatment and “talk therapies.” “Talk therapies do not usually work with soldiers suffering PTSD because they have to re-live the experiences all over again. Soldiers are reluctant to talk about the horrors that have lived through,” says Blair. “The current systems are failing them.”

Long-time resident of Gilpin County and Veteran of the Army, Blair Morgan is passionate about helping these soldiers. Blair, currently Senior Director of Human Resources at the Isle of Capri Casino, dedicates her life “to helping those that have served our country.” She has a long history of military life and knows what it means to serve. All three of her adult children are active military and her son has suffered personally from PTSD. She was an MP (Military Police) in the Army. She does not want any soldier lost or feeling alone. She wants them to get the help they need to become functioning, healthy civilians. “You did not have to fight the fight alone then. Why do it now? You do NOT have to battle alone.” This quote is from a charity group started in Denver called “No Soldier Left Behind.” It’s a group to which Blair Morgan knows very well and serves as Board Member.

No Soldier Left Behind was founded by Jacklynn Brown and her husband three years ago. They raise money to provide an alternative treatment that really seems to work. Brain Wave Optimization is a treatment that shows great results with these soldiers. Here’s how it works:

EEG electrodes are placed on a person’s head and their brain’s electrical activity is converted into musical tones. The process “guides the brain back to its natural, healthy and balanced state.” There is limited research available now, but the personal testimonies are overwhelmingly positive. Jacklynn’s husband came back from Afghanistan completely different. He was angry, lashing out most of the time, and not sleeping. He turned to alcohol, drugs, whatever would take the pain away. After numerous visits to the VA for help and many medications later, his symptoms only worsened. Nothing was working. Then they discovered Brainwave Optimization and after only one treatment, he slept through the night. After a week of intense treatment, he was his old calm self again, easier to talk to, kinder, happier and they had their family back again. She was so moved by what happened, that they vowed to help others in this same situation. They formed the charity, ‘No Soldier Left Behind’ with the sole purpose of providing help for Veterans suffering from any kind of PTSD. They provide support, they fund and link them with a provider of Brainwave Optimization, and walk them through the process.

–3 out of 10 people, civilian or military, that spend time in a war zone develop PTSD

–50% of those with PTSD do not seek treatment

–In 2012, more military deaths were caused by suicide than by combat.

These statistics need changed. Our Veterans are precious and deserve all the help they can get, help that works. The Department of Defense is starting to look into how effective Brainwave technologies can be, but right now, it is not an approved treatment plan covered by the VA or insurance. Jacklynn, the president of NSLB says, “Hopefully one day this organization will not be needed. I hate the fact that there is such a need for this kind of help.”

The Isle of Capri is generous in their support of this program. They and the Peak to Peak Rotary Club have donated much to this organization. Blair is happy to talk to any group that wants to learn more. She says as of 2017, they have helped raise $62,000. Just this year, they approved 20 Veterans to receive funds for this treatment. She wants any Gilpin County Vet who needs help to contact NSLB immediately. You can call 303-256-6550 or go to www.nslbinc.org for more information or to donate to support our Vets.

END_OF_DOCUMENT_TOKEN_TO_BE_REPLACED

Benefitting the county, schools, and much more By Don Ireland   This year marks the 30th anniversary of casinos opening in the former little mining towns of Black Hawk, Central City and Cripple Creek, Colorado. In those early years, smoking was allowed inside ... END_OF_DOCUMENT_TOKEN_TO_BE_REPLACED

Where the dead get to tell their story By Jaclyn Schrock On Saturday, August 21, the Gilpin Historical Society held their annual Cemetery Crawl. Tickets allowed the shuttle of hundreds of guests from the Teller House parking lot to the Cemetery. Depending on v... END_OF_DOCUMENT_TOKEN_TO_BE_REPLACED