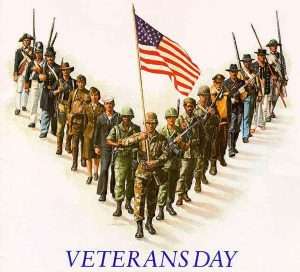 In its 244 years, the United States has been involved in a dozen major wars to defend our nation, preserve our freedom and democracy, and serve our national interests. The major conflicts include the Revolutionary War, the War of 1812, the Mexican War, the Civil War, the Spanish-American War, World War I, World War II, the Korean War, the Vietnam War, the Gulf War, and the Wars against Terrorism, including the wars in Iraq and Afghanistan. Our armed forces have gone into harm’s way many other times, too.

Millions of Americans have served in our military. In World War II alone, 16 million served.

Many have been killed or died. The number of military dead is over 1,200,000. In World War II alone, America lost over 405,000 of its young men and women. Hundreds of thousands have been wounded, and many have suffered as prisoners-of-war.

Virginians have always been counted on to answer the call of duty. Bedford County’s experience illustrates this. Bedford men and other Virginians fought in the Colonial militia, with British forces in the French and Indian Wars, and against the British in the Revolutionary War and the War of 1812.

In the Civil War, some 3,500 Bedford men may have fought for the Confederacy. How many died, we may never know. Bedford men and other Virginians fought in the Spanish-American War. In World War I, about 800 Bedford men served in the military, and 39 died.

With the possible exception of the Civil War, World War II had a greater impact on Bedford than any other war. Some 4,000 men and women from the county served in that war, and over 140 died. Twenty men were killed on D-Day, believed to be the highest loss per capita on D-Day of any American community.

In the Korean War, three died in service, and in the Vietnam War, 19 died.

Bedford personnel served in the Gulf War in 1991, and some have served in recent years in the War on Terrorism, in Afghanistan and Iraq, and at least one has been killed in these recent conflicts.

It is fitting on Veterans Day that we honor all of the veterans, both living and dead, from Virginia and throughout the United States, including the men and women currently serving in uniform. To quote one of our recent presidents, “…there is no higher calling than service in our Armed Forces. We live in freedom because every generation has produced patriots willing to serve a cause greater than themselves. Those who serve today are taking their rightful place among the greatest generations that have worn our nation’s uniform…”

So, please join me today in pausing to reflect on the service of all our veterans, and then take a few minutes to reach out and thank one.

END_OF_DOCUMENT_TOKEN_TO_BE_REPLACED

Where the dead get to tell their story By Jaclyn Schrock On Saturday, August 21, the Gilpin Historical Society held their annual Cemetery Crawl. Tickets allowed the shuttle of hundreds of guests from the Teller House parking lot to the Cemetery. Depending on v... END_OF_DOCUMENT_TOKEN_TO_BE_REPLACED