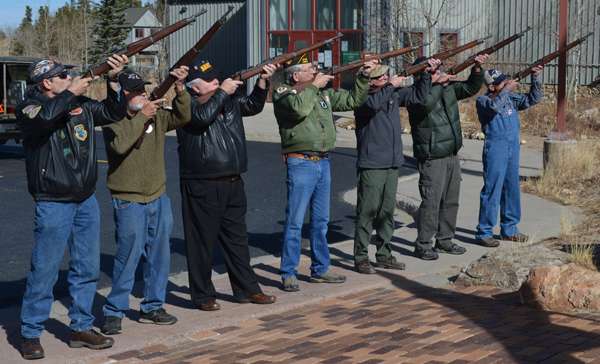 Lupo then called to mind the proclamation issued by former President Harry S. Truman setting aside May 20, 1950, as Armed Forces Day to honor the Armed Forces of the United States and the millions of veterans who returned to civilian pursuits. The veterans were to be recognized for their “skill, gallantry, and uncompromising devotion to duty characteristic of the Armed Forces in the carrying out of their missions.”

A moment of silence was observed for those who had died during the past year – Richard Dominguez, Sandy Hoffman, and Paul Frasier, also known as Paul Colorado.

Veterans then conducted a 21-gun salute. Following the salute, Dominguez noted, “As long as this memorial is maintained, we will be here.”

U.S. Air Force veteran James Murkland spoke in honor of his father, Frederick William Murkland, Jr., who served in the U.S. Navy during World War II and had been an American Legion member. Murkland related how grateful his dad was for the dignity and connection afforded him by the American Legion.

Murkland shared two very special letters that his father had received when he had returned home from duty. The first was from President Truman.

“To you who answered the call of your country and served in its Armed Forces to bring about the total defeat of the enemy, I extend the heartfelt thanks of a grateful Nation. As one of the Nation’s finest, you undertook the most severe task one can be called upon to perform. Because you demonstrated the fortitude, resourcefulness and calm judgment necessary to carry out that task, we now look to you for leadership and example in further exalting our country in peace.”

The other letter was from James Forrestal, Secretary of the Navy, dated May 9, 1946. The letter thanked the elder Murkland for his service during the war.

“I want the Navy’s pride in you to reach into your civil life and to remain with you always. You have served in the greatest Navy in the world. It crushed two enemy fleets at once, receiving their surrenders only four months apart. It brought our land-based air power within bombing range of the enemy, and set our ground armies on the beachheads of final victory. No other Navy at any time has done so much.”

U.S. Army veteran John Revelle shared some thank-you letters he had received from Gilpin school children at the school’s Veterans Day celebration the previous day. All the veterans had received similar notes.

“I was spit on when I got back home from Viet Nam,” Revelle recalled. “When I got these letters yesterday, I damn near cried. Thank you, Gilpin.”

The letters said: “Dear Veteran, it must have taken a lot of bravery to defend America. You’re a great person…” “I’m grateful you served in the military…” “Thank you for fighting for our freedom.”

Revelle was so touched that he shared these with veteran friends around the country and around the world.

The ceremony was concluded with the “National Anthem.” Following the observance, the attendees were honored with a complimentary lunch at the Ameristar Casino. 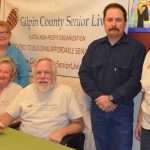 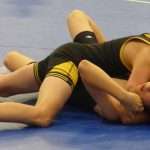