USDA declares Gilpin and 62 other counties as drought disaster areas 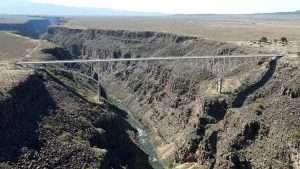 Despite snowfall measuring several feet locally last month, Gilpin County and 62 other Colorado Counties were declared disaster areas by the U.S. Department of Agriculture in March because of the overall statewide drought occurring in 2020 and 2021. Farmers in the impacted counties can apply for emergency loans until November. Only Custer County, in the south-central part of the state, wasn’t on the list.

The total snowpack for Colorado’s mountains, as of March 19, was at 92 percent of average, according to the Natural Resources Conservation Service, a division of the USDA. Last year, Colorado rainfall was listed at 12.2 inches, about six inches below the annual average. The below-normal rainfall was below rate contributed to the current drought conditions in the state, which is ranked as the 8th driest state in the nation.

Droughts are nothing new to the Centennial state. The last one occurred in 2001. Heavy snowfall in April 2013 caused Front Range water providers to cancel anticipated drought restrictions. Six other drought periods occurred statewide from 1890-1996. To view current drought conditions in Gilpin and surrounding areas, visit: drought.gov and climate.gov. For information on snowpack, go to: nrcs.usda.gov and conduct a search for snowpack.

There are many state and federal agencies tracking droughts, precipitation and weather. In addition to the USDA, federal government agencies dealing with water-related issues, including Environmental Protection Agency (EPA), National Oceanic and Atmospheric Administration (NOAA) Food and Drug Administration (FDA) and Bureau of Land Management (EPA), to name a few.

The State of Colorado has multiple agencies, including the Colorado Water Conservation Board (CWCB) and the Department of Health and Environment (CDPHE), that deal with water-related matters. CDPHE handles statewide water quality management, monitors rivers, lakes and streams, wastewater treatment, groundwater, pollution management and other regulations. CWCB was formed nearly 80 years ago to provide policy direction on water issues. As the state’s most comprehensive water information resource, the agency maintains expertise in a wide range of program and provides technical information regarding the utilization of Colorado’s waters. The CWCB represents each major water basin, including Denver and other state agencies, in a joint effort to use water wisely and protect water for future generations.

Nearly six years ago, the CWCB created the Colorado Water Plan after receiving input from many groups and individuals throughout the state. The nearly 500-page document can be downloaded or read online at: cowaterplan.colorado.gov.

There’s also the Colorado Department of Agriculture, Department of Natural Resources, Division of Water Quality, Division of Wildlife, and Division of Water Resources. The state also is one of the few nationally that has a judicial water court to handle water-related matters. The Water Court has seven districts, one for each of the seven main river basins: South Platte, Arkansas, Rio Grande, Gunnison, Colorado, White River and San Juan. Gilpin County is part of the South Platte River Basin District.

Water originating in Colorado’s mountains is the prime source of water for 20 million people in the West. The largest river, the Colorado River, has a basin that includes Colorado, Wyoming, Utah, New Mexico, Nevada, Arizona and California. The Colorado River Compact, signed in 1922, governs water allocations for the seven states and manages water storage from the Colorado River in Lake Powell and Lake Mead. The water also supplies the Hoover Dam outside of Las Vegas, which generates electricity for parts of California, Nevada and New Mexico.

In addition to the drought, Colorado and other western states are tackling the issues of climate change, diminishing water resources, increasing populations and politics. Those and other water topics will be discussed in upcoming installments of this series.

Don Ireland has appeared in two Eco documentaries involving water conservation. He has spoken to hundreds across the state on the subjects of saving water and appropriate planting in Colorado. In addition to contributing stories and drone photos to the Weekly Register-Call, he writes stories for the Colorado WaterWise Magazine.

Cutline: No Name, Colorado, located of I-70 in the western part of the state, was spared from last summer’s wildfires. However, concerns over water flows from the Colorado River is an important topic in the West. Photo-Don Ireland.

END_OF_DOCUMENT_TOKEN_TO_BE_REPLACED

Where the dead get to tell their story By Jaclyn Schrock On Saturday, August 21, the Gilpin Historical Society held their annual Cemetery Crawl. Tickets allowed the shuttle of hundreds of guests from the Teller House parking lot to the Cemetery. Depending on v... END_OF_DOCUMENT_TOKEN_TO_BE_REPLACED

Benefitting the county, schools, and much more By Don Ireland   This year marks the 30th anniversary of casinos opening in the former little mining towns of Black Hawk, Central City and Cripple Creek, Colorado. In those early years, smoking was allowed inside ... END_OF_DOCUMENT_TOKEN_TO_BE_REPLACED