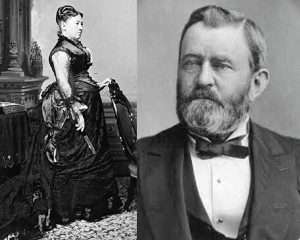 Although Gilpin County has enjoyed its share of famous visitors, perhaps none was as famous as Ulysses S. Grant. Grant first visited Central City in July 1868 with Generals William Tecumseh Sherman and Phil Sheridan, greeting well-wishers in the old Wells Fargo Express Office on Lawrence Street. He was running for president at the time, but his stop in Central City was part of a vacation, not an official campaign stop.

Grant’s second visit to Central City, on April 28, 1873, was the most famous of his three visits. Grant, his wife Julia, their daughter Nellie, Jerome Chaffee (then the territory’s representative in Congress and whose daughter would later marry Grant’s son Ulysses

Jr.), and several other dignitaries left Denver at 8 a.m. and, after some difficulties with the train, arrived in Black Hawk at noon. Mayor Abbe of Black Hawk greeted the presidential party and accompanied the Grants and Chaffee as they transferred to carriages for the trip up the hill to Central City. Nearly everyone who lived in Black Hawk and Central City stood along the road to cheer Grant and all of the buildings were decorated with flags and bunting. Mrs. Grant was especially interested in the mines of the area and how they were discovered, and the party stopped to inspect the Leavitt Mine with Bela Buell serving as a guide.

The presidential party’s destination in Central City was the newly opened Teller House, where civic boosters had placed $20,000 worth of silver bricks outside the grand entrance to the hotel. Although the Daily Register-Call reported that Grant and his party walked on the silver, every report of the event since has stated that Grant avoided the silver for political reasons. The United States used both gold and silver to back its money in 1873, and there were powerful political interests on both sides of the issue. If Grant had appeared to be favoring or dismissing the silver by walking on it, he would have faced numerous political problems upon his return to Washington, D.C. Being a smart politician, according to these later versions, Grant walked around the silver and used another door to enter the hotel.

Grant and his party were taken to the parlor rooms on the second floor of the hotel and given a chance to clean up before greeting the mayor of Central City and other dignitaries. The parlor rooms were filled with men and women who wanted to pay their respects to the president. After greeting the public, the president and his party moved to the dining room for dinner. After dinner, President and Mrs. Grant returned to the parlor for a short reception for the residents of Central City. William Bush, the manager of the hotel, had prepared an elaborate suite on the fourth floor of the Teller House for the Grants, but Grant never slept in it. As soon as the

reception ended, the Grants bid a polite goodbye to the residents of Central City and returned to their carriage for the drive to Idaho Springs.

Jim Allen, described by newspapers as “one of the very best of Colorado’s reinsmen,” drove the Grant’s in his Concord coach pulled by his six bays. The Register-Call described the departure of the Grants by writing that “the whole six sprang forward on the dead run down Eureka, turned the corner sharply but gracefully, crashed through Main street like a rocket,” and headed up Spring Street towards Russell Gulch. Before the party started down Virginia Canyon someone asked Allen how long it would take to get to the bottom of the hill. Allen replied that it would take about seventeen minutes, to which the person replied that he might want to take extra care given the importance of his passengers. Allen replied that he thought as much of his own neck as he did others, but then proceeded to make the run in twelve minutes, depositing the Grants at the front door of the Bebee House, where they would spend the night. The Grants

were reportedly impressed with Allen’s skills and all shook his hand and congratulated him on his “brilliant specimen of Colorado staging.”

Grant returned to Central City for his third visit, on October 8, 1875, but it was nowhere near as grand as his 1873 visit. Accompanied by his wife and secretary, Grant visited Colorado Springs and Manitou Springs and then took the train to Golden, Black Hawk, and Central City before taking a carriage to Idaho Springs and Georgetown. Newspapers reported that the trip was purely for pleasure and relaxation and that Grant resisted all attempts to make it an official visit. This was Grant’s final visit to Colorado; when he visited Cheyenne in 1879 he declined an invitation from the governor to visit Colorado a fourth time.