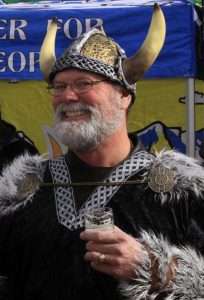 In Norse mythology, Ullr was the son of grain goddess Sif and stepson of the thunder god Thor. Part of pre-Christian Germanic religion that was passed down orally through sagas, many details had been lost by the time it was recorded in the 13th century. What is known about Ullr is that he was a deity of prime importance. Handsome and warlike, his archery and hunting skills were legendary. A purveyor of justice and often invoked before a duel, he was a skater, a skier, and may have used his shield as a sled. Modern skiers and snowboarders have adopted him as a patron saint of snow.

On the snow-packed grounds of Parfet Park in Golden, CO, revelers – Scandinavian and otherwise – gathered to celebrate the winter season. Bedecked in their Viking finery of horned helmets, leather, faux furs, and replica Iron Age jewelry the crowd was well-entertained with an impressive lineup of bands during the three-day festival. The picturesque setting next to Clear Creek and Golden’s prominent mesas backed the performers that included: The UllrGrass Allstars, Rapidgrass, Drunken Hearts, Thunder & Rain, White Water Ramble Trio, Pete & Joan Wernick, Rum Creek, and Dorado. Hometown heroes Coral Creek and friends kept fuzzy boots tapping and dancers dancing. Craft beer and cider from thirty vendors along with screaming Viking cocktails slaked thirsts as the music continued into the night at New Terrain Brewery. As of last Sunday (the final day of the event), with the snow god Ullr properly appeased, we can expect more of the white stuff during coming months.

END_OF_DOCUMENT_TOKEN_TO_BE_REPLACED

Where the dead get to tell their story By Jaclyn Schrock On Saturday, August 21, the Gilpin Historical Society held their annual Cemetery Crawl. Tickets allowed the shuttle of hundreds of guests from the Teller House parking lot to the Cemetery. Depending on v... END_OF_DOCUMENT_TOKEN_TO_BE_REPLACED