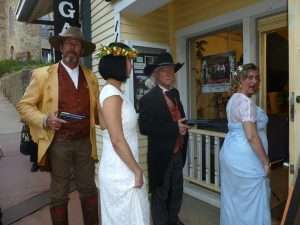 Friday, September 19, 2014, was a very special day. Not only were the aspen in full color-changing glory, but Roy and Janell Ince were celebrating the momentous occasion of giving their two sons away in holy matrimony. Although grown and gone their separate ways, the Ince brothers have both found the love of their lives and brought their blushing brides back to Colorado for a grand ceremony. The Reverend Dick Vickery gladly agreed to perform the double marriage and so all was set for the unique event at St. James United Methodist Church. The ceremony began shortly after six o’clock that fateful evening and progressed normally, as it should. There were tears of joy aplenty as each couple shared their self-written vows, exchanged rings and were joined together. Indeed, nothing seemed amiss as the happy couples cheerfully greeted the guests in the fellowship hall as the smells of delicious barbecue smoked meats wafted through the air. Drinks were being poured when a commotion arose from the entrance. Four lawmen from the Wild Bunch Gang interrupted the activities with a warrant in their hands and a determined gleam in their eyes. The sheriff declared that the brides were guilty of criminal acts of selfless love and affection and were to be arrested immediately. Two of the burly lawmen grabbed each of the brides and marched them down to the old county jail in the lower level of Washington Hall. Washington Hall, associated with beautiful works of art, is being used once again as a place of imprisonment it seemed. The brides were locked away, but not all was lost. Yes, even the Wild Bunch show mercy on the rare occasion. Immediately upon the brides’ incarceration, the Wild Bunch passed around a brass spittoon, collecting bail money. It wasn’t long before the love of the guests abounded in that spittoon and it was deemed enough to pay for their crimes. The brides were set free and the feast resumed, although many a suspicious look was tossed toward Janell Ince, the assumed instigator of the warrant. The Ince’s were so grateful for the release of their new daughters-in-law, they even invited the arresting party to dine with them. And so it was that lawmen and lawless women broke bread together in harmony.

END_OF_DOCUMENT_TOKEN_TO_BE_REPLACED

Where the dead get to tell their story By Jaclyn Schrock On Saturday, August 21, the Gilpin Historical Society held their annual Cemetery Crawl. Tickets allowed the shuttle of hundreds of guests from the Teller House parking lot to the Cemetery. Depending on v... END_OF_DOCUMENT_TOKEN_TO_BE_REPLACED

Benefitting the county, schools, and much more By Don Ireland   This year marks the 30th anniversary of casinos opening in the former little mining towns of Black Hawk, Central City and Cripple Creek, Colorado. In those early years, smoking was allowed inside ... END_OF_DOCUMENT_TOKEN_TO_BE_REPLACED