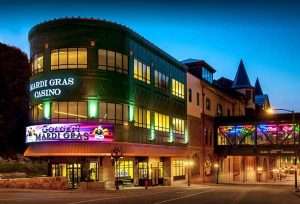 PRESS RELEASE – Twin River Worldwide Holdings, Inc. recently announced that it has completed the acquisition of Affinity Gaming’s subsidiary that owns the Golden Gates, Golden Gulch, and Mardi Gras casinos in Black Hawk, Colorado. The purchase price of the acquisition was $51 million, subject to customary adjustments.

As previously announced, with the completion of this acquisition, Twin River has also acquired the right to three sports gaming licenses in Colorado in connection with the passage of Proposition DD on November 5, 2019. The company has already formed partnerships for these licenses, which will be announced at a later date.

“Completing the acquisition of these three properties expands our footprint in Colorado well beyond our Arapahoe Park racetrack and Off Track Betting network,” said George Papanier, President and Chief Executive Officer of Twin River. “We are very pleased to close on this transaction, the latest in our ongoing efforts to diversify our portfolio. Equally exciting are our two additional casinos under contract in Kansas City, Missouri and Vicksburg, Mississippi, as well as our newly-formed partnerships with two well-known sports betting franchises, which we are looking forward to announcing prior to the launch of sports wagering in Colorado.”

Golden Gates, Golden Gulch and Mardi Gras are located in close proximity to one another along a half mile strip of casino and casino-hotel properties in the historic mining town of Black Hawk, Colorado. Together the properties contain a combined 36,000 square feet of gaming space featuring nearly 20 table games, approximately 700 slots, and a poker parlor. The properties also offer three restaurants and 24/7 bars, and one of the only parking garages in the market, with 700 spaces.

Papanier states “We are excited to move forward with these new acquisitions and continue to make progress towards closing other previously announced purchases as we execute on our long-term growth strategy for the company and its shareholders.”

END_OF_DOCUMENT_TOKEN_TO_BE_REPLACED

Benefitting the county, schools, and much more By Don Ireland   This year marks the 30th anniversary of casinos opening in the former little mining towns of Black Hawk, Central City and Cripple Creek, Colorado. In those early years, smoking was allowed inside ... END_OF_DOCUMENT_TOKEN_TO_BE_REPLACED