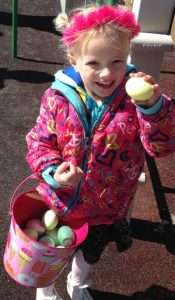 Well over 100 children, 10 years of age and younger, showed up for the Easter Egg Hunt last Saturday in Central City. The warm, sunny, spring weather undoubtedly contributed to the number of kids that massed in front of the Teller House Garden, Easter Egg baskets in hand, waiting for the start of the hunt. As they waited, they gathered around Gilpin County’s Easter Bunny to collect candy and other treats. Although 30 dozen eggs had been dyed, decorated and hidden, it took only minutes for the children to find them all. The annual event is sponsored by the Elks Ladies. Poco’s Restaurant boiled all the eggs and provided a place to dye them. Many local merchants donated gifts and pizza. Everyone was delighted that this year’s weather was not a repeat of last year’s. It will be remembered that last year the egg hunt had to be postponed a week since up to three feet of snow fell in the area on Easter weekend.

Winners of the Privy Open 3K cross-country ski race on March 30 were Jim Ratte of Missouri Lakes, first place; Dennis Hopkins of Dory Lakes, second place; and Bill Ward of Eureka Valley Ranch, third place. Hopkin’s and Ward’s times in the race were within three seconds of each other. Hopkin’s time was 9 minutes, 41 seconds, and Ward’s time was 9 minutes, 44 seconds. Ratte’s time in the race was 9 minutes, 9 seconds. A gold, silver, and bronze plunger were the awards. The title of the race, Privy Open, was given because the event was supposed to raise money for outhouses in the Dorothy Lee Placer Central City Park. Due to poor turnout for the event, the 5K cross-country ski race was cancelled.

The third grade at Gilpin County School has received a generous donation to the library in their honor. It is from the CAP members whom they have hosted for several times this year. Reading tapes and books will be purchased. This year’s third graders have had such a good time with the senior citizens that this year’s second graders are looking forward to continuing the ties. In expressing their thanks to the CAP group, the current third graders said, “The future third grade wishes to adopt each and every one of you for the school year 1985-1986.”

Marvin Skagerberg, the son of Cari Skagerberg of Central City, is one of the runners in the 1985 Lou Gehrig Race for Life. The race is from California to New York and begins April 10. Skagerberg will be running on I-70 through Idaho Springs on approximately May 10. He is a 1956 graduate of Gilpin County High School.

Randall and Patrice Fortin of Thorn Lake are the proud parents of a baby boy. Will Francis Jayaram Fortin was born at 7:07 a.m. on March 15, at Boulder Community Hospital. He weighed seven pounds three ounces and measured 20.5 inches in length. The Fortins have one other child, 22 month old Liv. Maternal grandparents are Kenneth and Ardelle Norgaard of Kankakee, Illinois. Paternal grandparents are Robert Fortin of Oswego, Illinois, and Mary C. Fortin of Rolling Meadows, Illinois. Agnes Ruder of Herscher, Illinois, is the baby’s maternal great-grandmother. Paternal great-grandparents are Doreen Fortin of Dunedin, Florida, and Mary and Patrick Mulroe of Chicago.

Tuesday afternoon, Morris Steen of this city came into the office of the United Mining & Leasing Corporation in Central City and produced a lead envelope containing a radioactive disk which he said he had found in Lake Gulch several days before. Immediately, Van McKay, President of United Mining & Leasing, checked the disk for radioactivity with his Nucliometer and Geiger Counter, but was unable to ascertain the percentage because, in each case, the needle went to the “pin” on the third scale, both in and out of the envelope. Steen was checked for radiation and found to be affected by his handling of the disk, whereupon Mr. McKay requested he bath and change clothes for future readings. Upon Steen’s return, he showed negligible traces of radio-activity which pleased him to no end. We have since learned that Dr. Puck, at the University of Colorado has advised the United Mining & Leasing Corporation that the disc was manufactured by the U.S. Radium Corporation of New York City. A telegram has been sent to New York to ascertain the contents and handling methods for the disc so that proper disposal may be made.

Mrs. Mary Robison of Morrison and Mr. and Mrs. Bill Cowan of Denver were guests at the Frank Fleiss home on Sunday.

Mrs. Hilda Belcher was up from Golden for the weekend, visiting at the homes of Fred Mitchell, Gordon Thomas and Marlin Belcher.

Mr. and Mrs. Eiven Jacobson arrived Friday night from High Rolls, New Mexico. They will remain several days with her parents, Mr. and Mrs. James Robins before going on to Jackson, Wyoming for the season.

Mr. and Mrs. Norman Blake were in Ft. Collins Sunday where they visited the Melvin Jacobs family.

Among those baptized at the Methodist Church in Central Easter morning was the infant daughter of Mr. and Mrs. Warren Johnson of Denver, and great granddaughter of Mrs. Hilda Belcher.

One of the panel members on the Voice of Youth program was Given Hughes. We enjoyed seeing her on Television.

The Pipes and Snyder families were guests at the Stinson home on Thursday.

The Johnson family members were Sunday visitors at the Ress home.

The City Council met in regular monthly session, on Thursday evening, April 9th. Present, Mayor Lake, Aldermen Teller, Armfield, Duffield and Lawry. Minutes of last and preceding regular meetings read and approved. City Marshal and Water Commissioner made report of work done on water works and streets, and also of work to be done in the future. The water commissioner was authorized to procure pipe for overflow at city reservoir. Alerman Armfield called attention to the dangerous condition of the hole caved in on the Pierce Mine and suggested that the same be fenced. On motion the Marshal was instructed to see to it and take such measures as he saw fit in regard thereto.

Saturday Evening April 18th. It is hoped that every person in this vicinity have kept this date in mind, and will be in attendance at the Opera House that evening to witness the three-act comedy, “Saintly Hypocrites and Honest Sinners,” presented by the Gilpin County Dramatic Society. This is a play that you cannot help but enjoy, a play that will make you leave the opera house realized that you have seen and heard something really worthwhile. The curtain will rise at 8 o’clock and after the play, a dance will be given at Armory Hall, admission to which is placed at $1.00 per couple. There will be orchestra music, and it is hoped a large crowd will be present to thus end a “perfect evening.” A supper will be served at the Lampshire lunch room at midnight.

Attorney Leroy J. Williams and wife came up from Denver Saturday evening, the former to attend to legal matters before the district court, while the latter visited friends. They returned home Wednesday morning.

Everett McCoy motored up from Denver Saturday afternoon, returning Sunday afternoon accompanied by his wife and daughter, who had been spending the week here.

Mr. J. Dukes arrived in Central on Saturday afternoon, and spent Sunday with his wife and children who have been the guests of her parents, Mr. and Mrs. Robert C. Johnson. They returned home Sunday afternoon.

Mr. Leon D. Wurtz, of Rollinsville, was in Central on Monday last, having been summoned as a juror before the district court.

Mr. R.G. Griffith has been confined to his room for over a week suffering from a severe spell of sickness. His sister, Mrs. Burbank, of Longmont, accompanied by her daughter and husband arrived in Central Saturday evening, the two latter returning home Sunday evening. Mrs. Burbank remaining here to take care of her brother, who is getting along nicely under her care and will soon be out again attending to business.

Dr. Fraser, of Idaho Springs, came over to Central Tuesday morning by auto and took William Day to St. Joseph’s Hospital, Denver, where he will undergo an operation for a diseased foot. Latest reports are that it was found necessary to amputate the leg at the knee.

A professor has discovered what is supposed to be the eleventh commandment. The text is as follows: “Emas rof yltpmorp tseyap uoht sselnu repapswen a daer ton tlahs uoht.” The commandment is easily translated by beginning at the end and reading backward.

Tuesday afternoon Police Judge Louis P. Arrighi had an interesting case before him of a breach of the peace. It appeared on evidence that Peter Loeb and Albert Forrest attended services at Salvation Army headquarters last Sunday evening. Becoming hilarious during the exercises held, they were admonished to keep quiet. One word brought on another until a fisticuff was engaged in. Finally they were ejected from the hall. The arrested parties demanded a jury trial, and six jurymen were summoned, who brought in a verdict of not guilty. The court room was packed with persons taking interest in the trial, while others were in attendance through an idle curiosity.

Frank Magor, who resides on Prosser Street in the westerly portion of this city became suddenly insane on Wednesday evening last. About supper time, he drove his wife and children out of the house and commenced breaking up everything within reach, as well as stoning the houses in the immediate vicinity, and attacking everyone in sight. John Slattery, who was passing by saw the actions and antics of the demented man and went over to try and quiet him, when he was attacked and quite badly hurt before he could get away from him. Word was sent to Marshal Kelleher who, accompanied by R.B. Williams, Thomas Cody, Wm. Parenteau and others went up to capture him, which they did after a hard struggle as the madman was armed with a pipe wrench about five feet in length, and it is a wonder that someone was not brained on the spot. The unfortunate man, some years ago, while working in mine was struck on the head by a rock, affecting his brain, and he has been subject to fits from this cause ever since. A few months ago he had a fit while working in the Cameron Mine on Winnebago Hill and fell a distance of seventy feet down the shaft, sustaining only slight injuries. On Wednesday morning he appeared to be rational while on the street, and those who greeted him had no suspicions from his actions that he was on the verge of insanity. It is a very sad case and one which appeals to the sympathy of all.

Mr. S.V. Newell, general manager of the Concrete Mine, west of the Gunnell Mine, has made preparations to sink the main shaft to a farther depth of 100 feet, which will make the shaft 915 feet in depth. He is taking out considerable ore from the levels west of the shaft. It is not of a high grade, yet with the mill concentrates, which class of material yields 2.5 tons to the cord, it gives a fair average per cord.

AD: Lovers of the Weed should call on Albert Lintz for their cigars, smoking and chewing tobacco, and smoker’s articles, of which he has a fine assorted stock to select from.

Born: In Nevadaville, March 4, to the wife of Fred. Bolsinger, a daughter. Mother and daughter getting along nicely.

Born: In Black Hawk, April 11, to the wife of Louis Roy, a daughter.