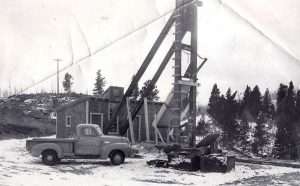 Sometimes it takes a serious problem to create a good time – such is the case with the county recreation center located at Clark Gym in Central City. The center providesentertainment such as shooting pool, playing basketball, video games, lifting weights, and listening to music. The center is part of a regularly opened, non-regulated alternative to what a lot of residents have complained about, according to Laura Compeau, the recreation center supervisor. The center provides activities other than hanging out in the bars.

Letter to the Editor: Dear clients and friends of the Columbine Family Health Center: I will be leaving my position as nurse practitioner at the Black Hawk Clinic on March 1. It will not be possible or easy to say goodbye to you all. I have greatly enjoyed working with you over the past five years and I wish you all good health and happiness in the years to come. Sincerely, Jerry Cantor FNP.

Letter to the Editor: The purpose of this letter is to ask for a “shower of cards” for a great lady. Mary Arie and her husband Jim resided in Gilpin County from 1963 to 1977. Mary worked very hard for the betterment of our county. She ran for county commissioner, was on the original board that made High Country Fire Department a district, and was involved in many more activities in the county. They were also active in St. Mary’s Catholic Church in Central City. Mary recently found out that she has terminal cancer. A shower of cards, at this time, would be appreciated. She would enjoy hearing from her friends to let her know our prayers are with her. Sincerely, Cathy Smith.

Lisa Schmalz, a senior at Gilpin County School, has been named the Elks Student of the Month for November. She is the daughter of Bruce and Sandy Schmalz of Central City. Her hobbies include sports, so it is no surprise that she is on the school basketball and volleyball teams. She is also the secretary and treasurer of the senior class, and has a 3.5 grade point average.

For the past two weeks, I have wheezed, coughed and choked in an endeavor to eliminate from my pure body the ravages of a cold. I remembered many years ago that Nick Johns, a native of Cornwall, England, said to me: “Look my son, what thee need is a bit of ‘grog.’ In other words, a ‘Rum Ot.’ Take a good snort before going to bed, and come mornin’ you’ll find you’re hon to the road to recovery.” I tried it last week. I even measured a thimble of grog in a glass and gave it to the femmes at the house, who also have colds, and they downed it with many grimaces, but it did no good. However it made it possible for me to imbibe their share, but that still didn’t do any good, as I am allergic to any form of alcohol, such as Scotch and soda, Bourbon and water and the like. I tried them all to no avail, and while I would have much preferred milk as a beverage I shut my eyes and downed the ‘Rum Ot’ with great gusto. It did no good so I guess I will have to wheeze and cough until a more sure remedy is offered.

Mr. and Mrs. Thurston Dull of Collibran, Colo., arrived in Denver Thursday to be with Mrs. Dull’s mother, Mrs. Mabel Richards, who is very ill. Mrs. Luella Fritz has also been in the City this past week with her mother.

Mr. and Mrs. Fred Rudolph of Denver were last Sunday guests at the James Robins household.

Mrs. Kenneth Thompson and children and Mr. Pieter deJong were dinner guests at the Ress home Saturday. Mr. deJong is an exchange teacher from Holland.

The Charles Wagner family drove over from Boulder to enjoy Sunday with Mrs. Wagner and Marion Heeren.

Mr. and Mrs. Emil Leibner of Denver were with Mrs. Wagner and Marion Heeren Sunday.

In the front windows of the Pharmacy can be seen samples of yellow copper iron which is coming out of the Becky Sharpe Mine in Russell Gulch, being operated by Thelma Mining Company, under the management of Richie I. Hughes. The ore carries good values in gold, silver and copper and we understand a big body of this mineral is showing in the different working, and daily shipments are being made to Idaho Springs. A carload of tailings from the dump mill ore from the Becky Sharpe Mine was shipped to the Globe smelter on Monday night.

Where there are but two in the family for which to provide meals unless there are guests, there are many things which must be denied them as they represent too much in leftovers. However, there are enough to keep a variety, even for two. The spring chicken is just about the right size for two when it first comes into the market and chops and small steaks may be bought in any market. Fish is another dish for the small family, when one may buy a fillet of any of the larger trout or lake fish, and the smaller ones are of suitable size to serve whole. Vegetables may be cooked and served in any quantity, small or large; omelets are good for the small family; soufflés may be prepared in any size, and puddings of various kinds and small pies may be prepared.

George and Thurston Matthews came up from Denver last week to look after matters in connection with the estate of their late father, Mr. W.C. Matthews, returning to Denver on Saturday morning.

Mrs. Robert Wilkinson left for Denver Saturday morning on a visit with relatives.

Mrs. Henry P. Lowe was among the passengers returning from Denver on Sunday after a short business and pleasure trip.

Richard Eddy returned Sunday evening from a short visit spent in the valley.

Everett McCoy, wife, and daughter motored up from Denver Saturday afternoon to spend Sunday with her mother, Mrs. Louie Welch.

Ben T. Moyle and family moved over from Idaho Springs this week and will make their home here for the present.

Senator Teller has introduced a bill authorizing the entry of lands for reservoir purposes, designed to meet the objections to the reservoir site bill which was vetoed by the president. It provides that any citizen of the United States, or any association of citizens in the United States, or any ditch or water company under rules and regulations prescribed by the secretary of the interior, shall have the right to purchase lands suitable for reservoir purposes not to exceed one quarter section of unoccupied public lands not reserved for public use, at $2.50 an acre.

This week in extending the 700 foot east level of the Buell Lode, the character of the crevice matter changed. Now they are taking out copper iron which is considered of as good, if not better quality, than that taken out in the same chute of ore in the upper workings. The 350 foot west level is also turning out a fair quality of stamp mill ore. This mine after much development work is giving promise of again producing as much as formerly. For the past few months Mr. Brooks and his associates have been at great expense in opening up new ground.

This week Mr. G.W. Mabee put miners at work in timbering up the main shaft on the English-Kansas Mine. The steam boiler is being overhauled and repaired by Mr. Geo Strohle of Black Hawk. It will be several weeks before the mine can be put in shape for a regular output of stamp mill and smelting ore. Two drifts will be driven both ways from the shaft at a depth of 300 feet.

Mr. John Vincent who has been hibernating around the various mining camps of San Miguel and San Juan counties for the past ten months, has returned. He will now engage in mining again in this county.

Mr. Geo T. Williams, Jr., was up this week looking after the interests of the Struby-Estabrook Company, Denver. Since resuming “the trail,” George has eschewed many matters of an earthly nature that to most of the “T.P.A.’s” are considered frivolous, and has become an adopted son of Salvation Armyites. George is a zealous member. It is to be hoped that he will be “found well tried and not doubting.”

Born: In Denver, January 25, to the wife of William Fullerton, twins, daughter and son.

Born: In Russell Gulch, January 27, to the wife of John Williams, a daughter.

Born: In Black Hawk, January 23, to the wife of Andrew Sorenson, a son, weight 10 pounds. Andy set ‘em up to the boys in fine style and has received many congratulations.