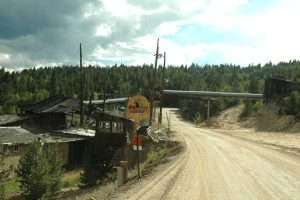 Lowering two men in a cage almost 300 feet into an old mine shaft is not an easy task. Especially at night. And even more especially on a cold January night. But, that is exactly what happened last Saturday at the Scandia Mine, which is near the Glory Hole Mine southwest of Central City. The two men, Van Cullar and his son-in-law, Chuck Lambert, went down into the hold, with the assistance of 16 people above. They were searching for a gun believed to be the weapon used in the murder of David Hardin Dockery. The two year old case remains unsolved, and Saturday night’s foray into the depths of the mine did nothing to remedy that situation. The shaft was empty: “Not even a beer can,” Cullar said. Dockery died of a gunshot wound in October 1982, on Alps Hill, in the general vicinity of the Scandia. Although two men were arrested for the murder, charges against one were dropped after a preliminary hearing, and dismissed against the other before his trial. A tip that the murder weapon might be found in the Scandia shaft was received by district attorney’s investigators several months ago. Since then, it has been a matter of logistics and setting up a time when everyone who needed to be there could get to the mine at the same time. Although the Dockery case is “not being worked actively,” according to Cullar, a homicide case is never closed until it is solved. In most cases, that would mean getting a conviction.

By William C. Russell Jr.: “Emperor Dickey” says he will abdicate in two years. If suck action of the “supreme sovereign” of the state of Colorado occurs, it will be the only good thing he has done for his “subjects” since he began his inglorious reign. It should be obvious to everyone that the “emperor” is throwing in the towel for several reasons other than the phony altruistic ones he has mentioned. The Legislature is now veto proof and Dickey can no longer rub their noses in the dirt with his highhanded vetoing. It is said that it would cost him three million to try to retain his throne and I am sure the thought terrifies him. There are other considerations too numerous to mention. I only hope, for the sake of all Coloradoans, that if he really vacates his imperial position, he will take with him, at least some, if not all of the vassals and varletry he has accumulated during his “dominion” over the people of Colorado. If it happens, it will be great to have a governor again after twelve long years.

At the last City Council meeting, the council presented a letter to Jean Bernier, a resident of Black Hawk, regarding use of the Morgan Placer property that he owns. According to the letter, “recently you (Bernier) attended a county commissioners’ meeting to discuss the possibility of a regulation impound lot and trash pickup service on the Morgan Placer.” At last month’s council meeting, Bernier informed the council of his intention to park heavy equipment that he owns on the site. The placer is south of the sanitation plant on Highway 119. Bernier was informed in the letter that in order to “conduct an impound and trash collection business,” three requirements were necessary. These were to provide proof of ownership or an approved lease agreement with the property owner, an engineered survey indicating the impound lot and trash service will be located outside of the floodplain, and upon approval of the first two items, a business license would be required. Portions of the property are within the floodplain. Bernier will therefore be required to comply with the Flood Damage Prevention Ordinance adopted by the council in August, 1984.

At a special meeting of the Board of County Commissioners, held Tuesday morning, William T. Grenfell took his place as the newly elected Commissioner, replacing Otto Bake, of Black Hawk. We feel sure that Bill will make a most able Commissioner and that roads in his district will be given careful supervision as it has been done in the past when Otto Blake was a member of the Board. The Board now consists of Martin Nelson, of District No. 1; Arthur Crowe, of Rollinsville and William Grenfell. All are Republicans and the taxpayers of Gilpin County can feel assured the interests of the county will be carefully carried out efficiently and economically.

The flood lights on the memorial on Academy Hill have now faded into oblivion. The tree, emblazoned with colored lights, has been taken down and thrown away to later enrich Mother Earth with its decay, and also its fruition. The windows, emblematical of the Yuletide season, are no more, and thus endeth the Christmas celebration of Central City.

Mr. Peter de Jong, headmaster of the Junior High School in Dordrecht, Holland, arrived last Saturday to visit the schools in Gilpin County. Mr. De Jong is on a six months visit under the Fullbright plan to study administration of secondary schools. He has spent most of his time in Florida. He will leave here Feb. 1 and thence back to the Netherlands. A reception was held for Mr. de Jong at the High School Monday evening, teachers and members of school boards attending.

We are happy to report that Louise Carter is out of the hospital and recovering nicely.

Mrs. Paul Beamer underwent a major operation at St. Anthony’s Hospital last Tuesday, but is getting along as well as could be expected.

Mrs. Yvonne Marshall returned home last week after spending a couple of months in Denver. She discovered that someone had broken into her dwelling during her absence and stolen several articles.

Mrs. Ann Gates has returned home from Boulder and has taken a room at the Gilpin Hotel.

Dr. and Mrs. Jack Nassibene were among those attending a dinner dance at the Shirley Savoy Hotel in Denver, given by the National Dental Association, last Tuesday evening.

Mr. Fred Mattivi received word Tuesday of the death of his aunt Mrs. Joe Zancanella of Glenwood Springs. Mrs. Zancanella at one time operated the Gilpin Hotel in Black Hawk, and was the mother of Alice and Tullio Valentino.

Mr. and Mrs. Jack Diskin and son are visiting here with Mr. and Mrs. A.A. Stapp. They came in from Tuscon, Arizona so Mr. Diskin could go on with his studies at the Colo. School of Mines at Golden. They will move to Golden this week.

Wednesday evening’s Denver Post said that James Robins, accused of possessing liquor and a still on his ranch on Dory Hill, was fined $200 and ordered confined until the money was paid into court. The still was found on his ranch last summer, in a building which he had rented to other parties, claiming ignorance of what the parties used the building for, which was found by prohibition officers and confiscated, and Mr. Robins was arrested in connection therewith.

Sheriff Williams received a telephone message from Mrs. Manning of Denver, Wednesday afternoon saying that her father, Mr. W.C. Matthews, who went down to Denver the end of last week, was seriously ill, at the home of his daughter, Mrs. Kloer. No further word has been received of his condition up to the time of going to press.

Jazz is heralded as the first music that is truly American. Poor America.

The committee of citizens who went to Denver on Thursday of last week to attend a meeting of the State Utilities Commission, where the hearing was to be held on the application of the Colorado & Southern Railroad to abandon the high line between this city and Black Hawk, succeeded in having the Commission rant a longer time in which the people of the county could present their side of the case in opposition to the appeal of the railroad company. The request was granted by the Commission and Monday, January 26, was the day set for the final hearing of this matter.

The Becky Sharpe Mine is shipping ore by truck to the Dump Mill in Central this week.

The road down lower Spring Street is dangerous for man, beast, or auto travel and should be attended to.

Herman Pallaro is on the sick list this week with a bad case of lumbago.

E.T. Crawford, who has been confined to his home with a bad cold for the last ten days, is now convalescing.

Messrs. Frank Gray and F. Obweger brought up two loads of coal on Tuesday for the Evergreen Company.

The worst gale this season occurred Monday night, lasting until the following day at noon, with the thermometer at 12 below.

Mr. and Mrs. W.G. Johnson of Trinidad arrived on Monday from Caribou, Boulder County, where Mr. Johnson secured mining interests which he will develop next spring. They remain here until February first. He will examine the concentration works at Idaho Springs, as well as the stamp mills of Gilpin County, before determining what kind of a plant to put in on the North Boulder next spring.

Messrs. W.J. Lewis, George W. Mabee and Ben Kimber, who were summoned to Telluride, San Miguel County, to give expert testimony in a milling case, returned last Sunday. Mr. Fred Kruse, also summoned in the same case, did not return, he not having given in his testimony.

Mr. Joseph Harvey arrived Monday from Greeley and took charge of the management of the Model Market in this city. His brother William will have charge of Harvey & Co., in Greeley. Joseph’s wife will remain in Denver for a short time visiting friends. They will take up a residence here, the family of William removing to Greeley.

Mr. Bradford H. Locke was a visitor to Central the first of the week.

Mr. William Lynn, the discoverer of the Main Lode on Central City Hill, which is being worked under lease, showed up last Monday evening. Billy, having leased his ranch, has his family located in Denver. He brought his kit of prospecting tools with him and will remain in the county for some length of time in hopes of opening up a fine bonanza. May luck attend him is the sincere wish of the Register Call.

Born: In Central City, January 1, to the wife of Nels Kellerup, a son.

Born: In Central City, January 7, to the wife of Charles Carter, a daughter.

Married: At the Cathedral, in Dubuque, Iowa, January 1, Miss Mary E. Murphy and Mr. Thomas H. Duffy, both of that city. The bride is the niece of Mrs. M. Rank of this city, and the first daughter of Mr. J.S. Murphy, editor of the Dubuque Telegraph. She visited here a year ago last summer and made many friends during her stay who will unite with the Register Call in extending her congratulations. The groom is a young and rising lawyer of the Key City.

Married: In Denver, December 26, Mr. John C. Waters of this city to Miss Lena Landon of Denver. By an oversight the above announcement was overlooked in last week’s issue and we herewith hasten to extend congratulations. The couple have taken up a residence in this city on Gregory Street.

Died: In Russell Gulch, January 10, Griffith Evans, aged 58 years, native of Wales. Deceased leaves a wife and five children to mourn the loss of a kind and indulgent husband and father.

END_OF_DOCUMENT_TOKEN_TO_BE_REPLACED

Benefitting the county, schools, and much more By Don Ireland   This year marks the 30th anniversary of casinos opening in the former little mining towns of Black Hawk, Central City and Cripple Creek, Colorado. In those early years, smoking was allowed inside ... END_OF_DOCUMENT_TOKEN_TO_BE_REPLACED