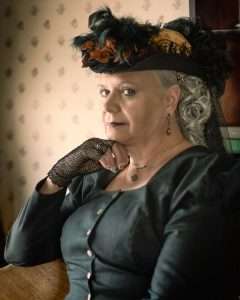 By Esther Campbell: The thermometer on the porch reads 20 degrees and there is a snowy mist over the gulch. Winter is early for another season, the gray crowned rosy breasted finches are here from the western Arctic. My diary reports that last winter I saw them for the first time here on the Casey on November 16. The brown capped rosy finches were here last week, but they breed in the Colorado Rockies above timberline. I’ve been reading “The Migration of Birds” by Jean Dorst of the Natural History Museum, Paris. I was startled to learn that the study of migration is fairly new. Scientists before the 18th century believed birds hibernated like mammals. In 1770, a man by the name of Buffon published a volume called “The Natural History of Birds.” His experiment of putting several swallows in an icebox where they promptly died proved his theory that most birds are not able to reduce their bodily functions to a torpor state. J.J. Audubon did a great deal of work in the study using the banding method. With the invention of radar, more was learned. Still there are a lot of blank spaced. This book, published in 1963, ends by saying: “Migrations, like birds themselves, are multiple and involve a number of differed elements which cannot be reduced to a rigid formula.” But, as long as the folks of Gilpin County can furnish a feeder with sunflower seeds, I pray we will see the rosy finches!

By David S. Grogan: Last Saturday at 2:00 p.m., I had the privilege of conducting a wedding service at the Golden Rose for Steve Higgins and Laurel Froemke. It was a fine occasion with a reception following at the Stage Stop in Rollinsville. Both the Froemke and Higgins extended families were present from all over the United States. Four generations were represented. It was all done up proper in the grand old tradition.

The Gilpin County Commissioners are again hopeful that they will receive two mineral assistance grants from the state. All three, Van Cullar, Don Diltz, and Jerry Ward, went to Glenwood Springs last Friday to present their case to the advisory committee that reviews the grant applications. All seven members of the committee voted to recommend full funding for the grant to purchase the Clark School building in Central City from the Gilpin RE-1 School District. According to Diltz, Morgan Smith told the committee that he had seen the building and it is a good one. Smith is the executive director for the state Department of Local Affairs and has the final say on the $225,000 grant.

By Fred Thomas: Throughout the week chipmunks skittered about among the rocks, grass-hoppers buzzed lazily as the leaves fluttered down from the trees, and the sun shown down from a cloudless sky. Sunday morning, the clouds moved in and the temperature dropped considerably. Fog advanced, retreated, and advanced again throughout the day. It was a stay-at-home day, and the fog seemed almost to move in and hover about the rooms of our house. My mind seemed numb in the gathering mists, and it was an effort to even consider tackling the thousand and one little odd jobs which I’ve been avoiding all summer. Finally, just before dinner, I pushed myself out of the house and forced myself to take a short walk up beyond the Sleepy Hollow mine; changing the air in my lungs, as it were. The long awaited snowflakes came with the gathering darkness, and a clean, white world replaced the dry, dust-covered terrain as I peered out the window this morning.

Once again, as we close “Ye Olde Fashioned Eating House,” I wish to say: “I only hope you have enjoyed visiting our place as much as we have enjoyed serving you. Wishing you all a most enjoyable winter and looking forward to seeing each and every one of you next season.” Signed, Mertrand Mattivi.

Mr. and Mrs. John Anderle and Mr. Gust Bakos went to Walden last week where the men expect to do some mining.

Mrs. Perl Neff has returned to her home on Swede Hill after spending several weeks in Denver.

Mr. Pete Strom is able to be home again after a two month’s stay in the Veteran’s hospital in Denver.

High School Notes: This week is the week for examinations, and the closing of the first quarter. The Juniors had an examination this morning and found out that Physics isn’t such an impossible subject after all. Everyone seemed pleased with their grades. We have some new music to which we are applying ourselves from time to time in view of future programs. Halloween is fast approaching and we hope the high school students will maintain the standard of the past years by refusing to do any mischievous acts. Either Reuben’s ghost or one of his relatives has appeared in the last few days, and one has already met his fate (Alas for his majesty the mouse.)

J.L. Davis was over from Idaho Springs visiting with friends on Sunday last.

Messrs. W.J. Maxson and J.L. Tapp came up from the valley on Tuesday returning the same day.

A surprising thing about the weather is that automobiles can drive down the Jenny Lind road. We want the Gilpin county historian to tell me what other year that was possible on the 29th day of October. In Elk Park and 12 Mile the drifts on the roads are a foot deep which the autos cannot travel over on account of the snow being packed so hard. If the crust could be broken this road also would be passable.

Planting of fall wheat, digging of potatoes and sugar beets, and the movement of the fruit crop to the market, are progressing rapidly, according to the weekly report of the United States division of crop and livestock estimates. Plowing in eastern, northern and northeastern Colorado is progressing, according to the report, but in other sections of the state more rain is needed to condition the ground for that work. More than half the winter wheat crop has been planted, the report says, and with conditions generally favorable for the sowing of winter wheat in the north, northeast and east, the crop is getting a good start.

A general shakeup of the state prohibition forces was foreseen recently at the state house when it was learned that Robert A. Grund, for a year a member of the state prohibition squad, had handed in his resignation to Governor Sweet and at the same time had filed formal charges against John R. Smith, head of the law enforcement department, before the Civil Service Commission.

Among others returning from Salida who were delegates to the annual session of the grand lodge of the Independent Order Odd Fellows was Mr. Chris Hesselbine of Russell Gulch lodge No. 40, who reached home on Monday. Like the rest of the delegates he states that much good for that order was the result of the last annual session.

Mr. George A. Rouse, a former Gilpin Countyite, who has been engaged in diamond mining in Africa, returned Monday evening. He thinks that there is more to be obtained in gold mining than in diamond seeking. Hence his return to Gilpin County.

A letter received this week from Mr. E.M. Parrish, of the Hillhouse Mine in Russell District, places him at Kansas City. He is in usual good health and will soon return to Central and resume work upon the Hillhouse Mine in which he and his friends interested with him have an abiding faith.

Mr. H.B. Gilbert and son, who are prospecting in the Pine Creek belt of veins, came in on Saturday morning’s hack and left for Denver on the afternoon train. They reported a fall of snow of three inches on Pine Creek and the upper portion of North Clear Creek that morning. They returned Wednesday, leaving for the camp in the afternoon.

Mr. Adam Hasselwood, who is general manager of a group of mines on the westerly slope of Yankee Hill, has returned from Milwaukee, where he attended a meeting of the Milwaukee Mining Company. Wednesday he left for the miens and will resume work again. Sufficient ground has been opened up to keep five stamps dropping. He has secured a five stamp battery at the Pioneer Mill on Silver Creek, which is near to the property.

Mr. Charles L. Harker, manager of the Fairfield Lode, Russell District, has about completed cleaning out and re-timbering the engine shaft on the Fairfield. Next week miners will be put at work in sinking the shaft.

Born: In Nevadaville, October 25, to the wife of Thomas Chappel, a daughter.

Born: In Russell Gulch, October 23, to the wife of Joseph Chynoweth, a son.

Born: In Central City, October 21, to the wife of James Temby, a daughter.