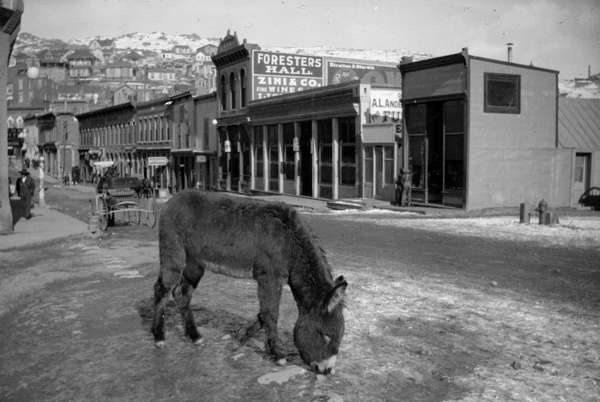 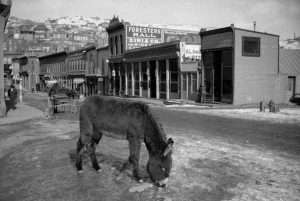 Beginning anew, an old family tradition of reunions, the Evans family held their second at the William C. Russell Park on July 21. It was in the late 1940s, said Bonnie Iverson, of Thornton, when the family discontinued the annual event. Iverson and cousin Barbara Clemm are trying to re-establish the need for family contact in the many descendants of Samuel Evans. Evans, their great-great-grandfather, came from Illinois at the onset of the Colorado Gold Rush. Evans and his wife Jenny made their home at 28 Spruce Street. He was buried in the Central City Cemetery in 1896. Iverson’s grandmother, Ethel Evans Christensen, who will be 90 on November 28, attended the reunion of almost 100, which include five generations of the Evans family.

Carl Skagerberg, longtime Central City resident, is recuperating from a mild stroke. Helen Cryan, his daughter, reports that he is feeling wonderful and receiving physical therapy for one hand which was affected. Skagerberg celebrated his 89th birthday on July 17th, at Cryan’s house in Northglenn. Attending the party in his honor was son Marvin, from New York City, his daughter Marjorie Salzwedel and her son Bill, of Florida. Many of his grandchildren were also present.

Engaged: Mr. and Mrs. Wilhelm Lorenz, of Black Hawk, wish to announce the engagement of their daughter Stephanie Ann to Jeffrey Cole St. John of Wheatridge. St. John is the son of Charles St. John of Lakewood, and Mrs. Orville Heine of Wheat Ridge. Stephanie, a graduate of Gilpin County Re-1 School completed her Bachelor’s degree in education at the University of Colorado in 1989. She is currently working with her family at the Black Forest Inn. Her fiancé is associated with St. John Enterprises and Allstate Insurance. A December wedding is planned.

Died: Angel Lee Angus died July 9th, 1991. She was one day old. She is survived by her parents, David and Monette Angus of Denver, her sisters, Allison, Denise, Vicki, Maggie, Lisa, and Cary; her grandparents Earl and Vera Christy; and her grandmother, Sandra Adreon, formerly of Central City. Graveside services were held July 16th, 1991, at Fort Logan National Cemetery.

Died: Dee Ann Dincola-Waxler died in Daytona Beach, Florida, July 7, 1991. She was 23 years old. Born July 18, 1967, she was married to Russell Waxler. Their daughter is Leslie Waxler. She was preceded in death by her daughter Laura Beth Angel Waxler. In addition to her husband and daughter, she is survived by her parents, David and Darlene Dincola of Lakewood, and Earlene Leona Cole, formerly of Central City; her grandmother, Ruby Dincola; her brothers, David and Danny Dincola; and her sister, Shauna Dincola, all of Lakewood. Graveside services were held at Mt. Olivet Cemetery on July 17th, 1991.

A car driven by Jack Maisel, of Denver, toppled from the road in the rear of the Epsy ice house between Rollinsville and Tolland, plunging down the embankment to the tracks of the Rio Grande Railroad. He was accompanied by his grandson, who was thrown from the car, sustaining severe injuries. Both were taken by the Coal Creek ambulance to the hospital in Boulder. Sheriff Tom Collins investigated the accident.

Mr. and Mrs. Douglas Morrison and Doug’s sister, Mrs. Gene Gaweg and daughter, all of Denver, were in Central City Wednesday, and as usual paid the Editor a friendly visit. Both Doug and his sister Gene were born in Central City and visit here several times a year, living again remembrances of other days.

Married: Alice Frances Ress and Bernard Montell Harvey were united in marriage in a pretty ceremony in St. Teresa’s Church in Aurora, Saturday afternoon, at 2:00 o’clock. The bride was given in marriage by her father. She wore a lace and chiffon ballerina length dress with fingertip veil. Her bouquet was made of a white orchid and baby carnations. Her bride’s maid was the groom’s sister. Her dress was blue chiffon and she carried a spray of baby carnations. Richard Harvey was best man for his brother. The men in the wedding wore white tuxedos with boutonnieres of white carnations. The church was decorated with white gladiola and large white daisies. The wedding reception was held at the Malibu—on Smith Road. The bride’s sisters and her roommates were hostesses. The young couple is making their home in Boulder. Mr. Harvey is attending the University. Out of town guests were Mr. and Mrs. Montell Harvey and son, Richard, of Clark, South Dakota; Mr. and Mrs. Darrell Gottsleben, and Mrs. Ella Gates also of Clark, and Mr. and Mrs. Richard Gates and daughter of Altus Air Force Base, Oklahoma.

The A & G Service Station, owned by Mrs. Grace Eccker and her late husband Andy Eccker, has been sold to Walter Partch and son Norman. The new owners took over the business on August 1st.

Mrs. Helen Mueller is in Colorado General Hospital, but hopes her stay there will be short.

Paul Eccker has been helping his aunt, Mrs. Grace Eccker, move household furniture to the Frances Olsen house in Chase Gulch, which Mrs. Eccker has rented and where she is now living.

The new fire truck for the Central City firemen has been ordered and will be delivered within the next 30 days fully equipped to meet almost any emergency. As the amount necessary has not yet been subscribed to pay for the same, a committee met a number of former residents of this city at the Gilpin County picnic, on Saturday, and secured subscriptions of nearly $100. Residents and businessmen of Central City, who have not yet tendered their subscription to this worthy cause, will find the subscription paper at Quiller & Gabardi’s store, where subscriptions can be left.

Died: Mr. Frank Miller Hawley, son of the late Mr. and Mrs. H.J. Hawley, pioneer residents of Central City, died in Pueblo on Saturday last, at the age of about 50 years. He was born in this city and attended the public schools here, going with his parents to Denver when they took up their residence there. He is survived by his widow, Clare Hawley, a son, Richard, two sisters, Mrs. W.G. Perry of Denver and Mrs. Mabel Chapman of Reno, Nevada. Funeral services were held at the Roger’s chapel, Denver, on Tuesday morning last.

Died: John Dimler, a former well-known resident of this city, in the early days, died at his home in Denver on Sunday last, at the age of 65 years. While a resident here he was a member of the city council and conducted a barber shop until he left for Denver, where he had followed his profession up to the time of his death. He is survived by his widow, Rose Dimler, and a son, Charles G. Dimler. Funeral services were held at the Roger’s Chapel in Denver, on Tuesday morning last.

A rich strike of silver ore was made recently in the Klondyke Tunnel, near the mouth of Dory Hill in Black Hawk. The property is owned by Leopold Feissner, who has been developing the mine after working hours in the evenings and on Sundays, and has driven the tunnel into the mountainside some 120 feet. The rich ore was found on Sunday, and its importance was kept quiet for several days. It showed up in the bottom of the tunnel, on the foot wall side, between the crevice and the foot wall, and is in the nature of slabs which are easily taken down with a candle stick or gouger. Mr. Feissner had thrown some of the ore over the dump, never dreaming of its richness, until he saw a rock carrying native silver, when he concluded to have it assayed, and was considerably surprised when the assayer’s certificate showed 5,391 ounces silver and .40 ounces gold, a total valuation of $3,242.60 per ton. He also had a slab of the rich ore assayed which returned 25,800 ounces silver and 1.20 ounces gold, a total valuation of $15,730 per ton. An assay was also made of the streak of lead ore, in the same crevice, and that showed 3,800 ounces silver, a small amount of gold and 60 percent lead, worth $2,325 per ton. The strike of this rich silver ore has caused considerable excitement, and several locations in that immediate vicinity have been made. The vein is supposed to be the western extension of the Coaley Mine, in Silver Gulch, which in the early days turned out the richest silver ores in the state at that time.

The water is about out of the California Mine on Quartz Hill, and the shaft has been cleaned up to its great depth of 2,230 feet. The work of unwatering the shaft, re-timbering where necessary, and cleaning out the levels, has required diligent work since last December, and manager Patrick McCann and associates are entitled to much credit for the successful performance of the work. Future work to be done on the property will be determined in a few days.

Mr. Jerome B. Chaffee came up on the stage from Denver on Wednesday to attend to business matters.

Gulch miners in the Gamble Gulch section of the county were making from $4 to $6 per day in gulch mining.

S.S. Chamberlain and company were making $5 per day to the man at their gulch diggings on North Clear Creek, above the forks. Blake and company at their claim further up the creek cleaned up about $2 to the cubic yard of dirt during the week’s work.

At a depth of 200 feet in the Notaway Mine, the vein of mixed ore was from 18 inches to 2 feet in width, and shipments to the stamp mill returned 8 ounces gold to the cord. The property was owned and being worked on by Eb. Smith.

Ore from the Pine Tree Lode, treated at the Barstow Mill, was averaging 8 ounces gold to the cord.

The gold shipments from the three banks in this city, for the month for July, totaled $197, 500.

The firm of Barclay & Company had been dissolved by mutual consent, Mr. B.F. Barclay retiring. The new firm was to do business as McFarlane & Company, with W.O. McFarlane, Peter McFarlane, and W.J. Barclay as partners.

Governor Evans and D.H. Moffat Jr., cashier of the First National Bank of Denver, left for New York on a European trip the first of the week. Mrs. Evans was reported as being quite ill in Dresden, Germany.

Died: Mr. A.O. Swartzeli, of Black Hawk, was buried alive under a sand bank near the Continental Mill, in Chase Gulch, on Thursday afternoon, and was smothered to death before being dug out. 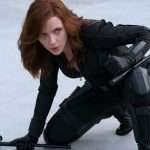 Black Widow gets her own movie…finally
Next Article 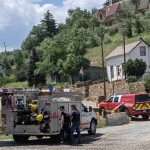