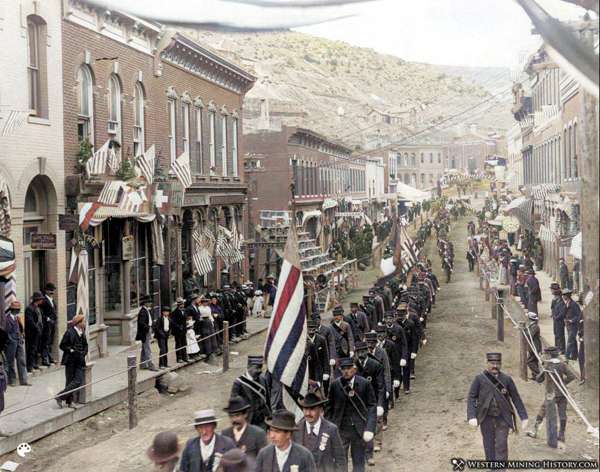 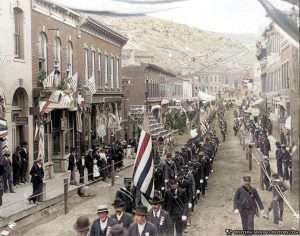 Tim Sabus thinks that Gunnell Hill is an ideal location for an 800-space parking lot. Three mining claims below the Masonic Cemetery can be reached without driving through residential areas, the location can be landscaped to hide the parking lot from view and, he says, the proposed lot fits well into Central City’s overall transportation plan. His firm, Tim Sabus & Company, plans to operate the lot from 7:00 a.m. to 11:00 p.m. daily, with fees ranging from $2 a day for a car to a maximum of $20 for a large bus. Paid customers would be able to leave the lot at any time. In his proposal to Central City, Sabus offered to set aside at least 25% of the lot for employees working in town. If the demand is there, he said, he would like to have nothing but local customers. “If parking gets tight, the first to get squeezed out are the employees,” Sabus said. Even though there would be fewer turnovers from people working in town, he feels the benefits from a steady clientele outweigh any revenue loss. Ideally, Sabus would like to sell blocks of parking to employers throughout town and be able to just wave their employees on through the gate. Sabus would also like to hire a 100% local crew at the lot. He plans to have seven or eight full-time employees and some part-time help. “Local employees get to know the customers, and if they have to be on the job at 6:00 a.m.,” Sabus said, “it’s asking a lot for someone to commute.”

Paul and Joan Adams have been running their Mountain Blue Gem shop at 108 Lawrence Street for 11 years. The Adams will soon be moving their shop to Georgetown. They had been leasing the shop and everything was fine until gambling started to change things. Paul Adams said, “The only thing I’m disappointed in is the whole campaign to promote gambling was to help the merchants in the towns. The merchants were deceived into thinking that they would benefit. Now we’re all losing our leases. The sad thing is the change,” says Adams. “Once it changes, you can never bring it back. You just have to adjust.” The Adams couple are going to continue to stay in the retail business selling their handcrafted and authentic Indian jewelry. The shop in Georgetown is a bit smaller and they will have to limit their gift items and concentrate on jewelry. Adams crafts a lot of the jewelry he sells. He also repairs jewelry at a reasonable price and wants to continue to improve on his jewelry designs. Adams said, “We’ve had a lot of fun over the years here in Central City. People from all over the world have come back to the shop again. We’ve met a lot of super people up here.” Regular customers of Mountain Blue Gem will be sad that they are leaving, but can be happy in the fact that Georgetown is only a half an hour away.

Mrs. Gladys Daugherty is entertaining her cousins from Kansas, who are enjoying this cool weather and taking in the many scenic sights in and around Central City.

Clyde Ellis, of Golden, has been spending several days here the past week. He is a nephew of Nick Ellis and Wm. Grenfell and has been with Coors for over thirty years. He is enjoying his vacation and partaking of Budweiser.

Bud Klein was in Denver one day last week visiting Mr. and Mrs. Henry Klein and other relatives.

Mrs. Walter Lutz entertained at a birthday party Thursday for little four-year-old Dean (Punky). Games and refreshments were enjoyed by the 16 children and mothers present.

A very good musical program was held Friday night at the Black Hawk Community Church, but only a small group of person attended so everyone really missed something special.

Miss Loretta Loughran, accompanied by her mother, Mrs. John Loughran, and Mr. and Mrs. Peter Machin, and Mrs. Joseph Hesselbine and children, were up from Denver on Monday, on a visit to the cemetery, returning home by way of Boulder.

Mrs. Albert Lawry, of Victor, Colorado, accompanied by her brother, Henry Trezise, of Fort Lupton, Colorado, were in Central on Thursday of last week, and were the guests of Mrs. William Mitchell, Jr., and brother, Hugh Lawry.

Mrs. John Jenkins was up from Denver during the week on a visit with relatives and friends, and to escape the hot season the plains city is experiencing.

Arthur Penna, of Black Hawk, had his left hand almost entirely blown off by an explosion of a box of blasting caps at the Carr Mine on Bobtail Hill, Saturday afternoon. He had gone down from a stope to get supplies for blasting and took six caps out of the box and placed them in his left hand, and while replacing the lid on the box, the six caps exploded, but from what cause he is unable to state, as the candle was nearly three feet away. As soon as possible Penna was raised to the surface and brought to Dr. Ashbaugh’s office in this city, where it was seen that the explosion had entirely destroyed the left hand, and the amputation of the member was made by Dr. Ashbaugh and Dr. Asquith. He is reported as doing as well as could be expected under the circumstances.

The Examiner of Telluride, of last week said that “Charles Becker and George Nicholson, who were wounded in the trouble at the Smuggler-Union Mines, are both in the hospital here and are rapidly recovering from their injuries.”

Mrs. Tom Flynn and sons came up from Denver on Wednesday, on a visit with Grandpa and Grandma Flynn, on Spring Street.

Mr. John H. Nicholls left for Denver on Tuesday, on his way to Victor, where he has obtained a good job at one of the big mines there.

Miss Ethel Harris, of this city, Miss Mollie McGinnis of Black Hawk, and Will Preville and Frank Beeman drove over to Idaho Springs Wednesday evening to take in the Elk’s ball.

Marshal Wilkinson now wears a handsome badge and star, which was presented to him on Saturday evening by the citizens of the city, through Attorney Woten. On the face of the star are the figures 1900-1901, and on the back is the following inscription: “To Robert Wilkinson—a token of esteem by the citizens of Central City.” “Bob” has made an excellent record as City Marshal, and the people appreciated his services to the extent of making him the above present.

The water in the California Mine is now down to the back of the 2,200 foot level, and the work of cleaning out that level and further unwatering the shaft to the bottom, a depth of 2,230 feet, will not take long to accomplish.

Nichols and Fisher were reported in good pay ore on the Kent County Mine, with a crevice two- and one-half feet in width, which was yielding from 6 to 10 ounces gold to the cord in the stamp mill.

Mr. E.C. Beach, formerly of Central City, and W.M. Burns had opened up a livery business in Denver. 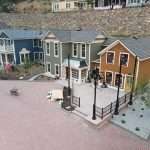 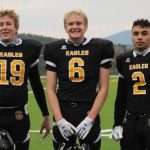