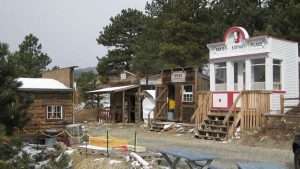 The cross-country skiing and hiking trail proposed by Black Hawk is now in the advanced planning stage. The trail will be called Black Hawk Trailhead, says Bill Lovingier, council member and resident of Black Hawk, who was instrumental in starting the project. Lovingier has been working with personnel in the Arapaho National Forest Service in trying to combine 160 acres of Black Hawk land with the surrounding National Forest land to create the trail. He says the trail will be extensive and will be well marked so people won’t get lost. The exact layout of the trail has not been established. Parking is the main concern right now because there will have to be an adequate parking lot available near the trailhead. A possible starting point for the trail is at Cold Springs Campground off of Highway 119 near Highway 46. The campground is closed right now because the campsites are being reconstructed, but the picnic area and parking lots could be used. Another site is being assessed approximately one mile north of the Cold Springs site. An environmental analysis still has to be done before the project really gets underway, and then work can begin on clearing vegetation. Part of the trails may be interlaced with existing logging roads. Another possibility is to make the trail accessible to mountain bikes as well.

Died: Stephanie Lynn Hostetter of Gilpin County died June 10, 1991. She was 33 years old. Born in South Bend, Indiana, she moved to Colorado in 1980. She then joined the United States Navy and moved back to Colorado in 1987 from her base in Virginia. She made her home in mid-Gilpin County. Hostetter loved participating in amateur rodeo and received many ribbons for her efforts. She was a member of the local Rodeo Association. She also enjoyed training her dog and won second place in a training competition. Hostetter was also interested in photography. Hostetter is survived by Jonny Van Orman of Gilpin County; her parents, Guy and Sharon Hostetter of Rochester, MN; and her sisters and brother, Liz Gammell of Houston, TX, Cathy McDonald of Nasua, NH, and Greg Hostetter of Rochester, MN. Memorial services were held June 20th, 1991, at the Metropolitan Community Church of the Rockies in Denver, Reverend Charles Arehart officiating. Arrangements were made by Hennigan Funeral Services in Idaho Springs.

Died: Betsy Lynn Roman, daughter of Beth Roman, was killed in an automobile accident in Chaffee County on June 5th, 1991. She was 27 years old. Born in Lapeer, Michigan, to Robert L. Roman and Beth Roman, Betsy later graduated from Alameda High School in 1982. She attended Virginia Commonwealth University in Richmond, Virginia, and studied business. Betsy was preceded in death by her grandfather, Luther Clyburn, who died in Gilpin County in 1981. She is survived by her daughter, Jennifer Elizabeth Roman; her mother, Beth Roman of Lakewood; her father, Robert Roman of Kannapolis, North Carolina; and her sister, Sara Jane Roman of Lakewood. Services were held June 10th, 1991, at Southern Gables Evangelical Free Church in Lakewood. Interment was in Alvarado Cemetery in Georgetown.

Recent guests at the home of Elsie Hall were Mr. and Mrs. Gaylord Ness, of Boone, IA. Mrs. Ness is a niece of Elsie’s.

A card from the Ed. Evans’ states that they are touring the eastern part of the country with their daughter, Mrs. Kathryn Gobel. They plan to visit Washington D.C., then go to Canada to visit another daughter, Mrs. Nan Dee Ponti and family.

Charles Fish and son Robert were up from the valley during the long weekend holiday camping and fishing.

We are glad to hear that Louis Plank is able to return home from the hospital on Saturday.

Mrs. Chas. Goodpasture left last Saturday to join her husband in Missouri. We are sorry to lose the Goodpastures from the community, but wish them the best of luck wherever they go.

A rare sight is the little white blossoms on the holly plant at the Corner Grocery Store. It is beautiful.

Wilfred Fullerton, vice president of the First National Bank of this city, motored up from Denver Monday, accompanied by John Jenkins, president of the bank, to attend a director’s meeting, returning home during the afternoon.

Dr. William Muchow, Miss E.A. Hart, Dr. Hewey, Dr. Davies and Dr. Freeman, of Chicago, all interested in the Chain-O-Mines Company, arrived in Central Sunday, on a short tour of inspection of the property, leaving Monday for Idaho Springs, where they inspected the Argo Tunnel and other holdings of the company, leaving for Chicago that afternoon.

George Eustice, of this city, had a narrow escape on Saturday last, while working in the “Glory Hole” on Quartz Hill, and he is congratulating himself that his injuries are not worse than they could have been under the circumstances. He was working on a bunch of ground on the face of the hole, and had stepped only a few feet from what was supposed to be solid ground, when the ground gave way with him, and he dropped some sixty feet, received a couple of severe cuts on his head, a fractured rib, and many body bruises. The men working in this “hole” are compelled to wear belts, to which are attached a rope, between fifty and one hundred feet in length, to protect them from falling down the hole, and it seems the one in use by Mr. Eustice had too much slack, which allowed him to fall the distance he did. He was brought down from the mine and was attended by Dr. Slater, the company’s physician, and is getting along as well as could be expected.

Died: Mr. Decker Lee, a resident of Rollinsville for the past ten or more years, was found dead in his cabin on Saturday last, at the age of 69 years. He had been missed from his usual haunts, and Peter Peterson concluded to investigate the reason, and on visiting his cabin found him lying on his bed, dead, and his face covered with blood. Coroner George Hamllik of this city was notified, and in company with Sheriff Oscar Williams, went over to investigate the cause of his death. No wounds having been found on the body, the coroner concluded his death was caused by a hemorrhage, and decided a coroner’s inquest was unnecessary, and the body was brought to this city. On Sunday an undertaker came up from Greeley and took the remains there, where his two sisters reside, and where burial took place.

Mrs. A. W. Langley and daughter arrived the first of the week from Maine, on a visit with her sister, Mrs. Nelson Millett.

Mr. T.S. Schlessinger, of Leadville, one of the owners of prosperous mining claims in the Cloud City, and a former businessman of this city, arrived in Central Wednesday, to attend to business matters.

Mrs. George Branch left Monday for Boston, Mass., being summoned on account of the illness of her daughter.

At the 4th of July celebration in Black Hawk, the main feature was the drilling contests, the double-hand being won by Eccker Brothers, with 25 5-16 inches, with Schoenherr and Feidel being second with 22 9-16 inches. The single hand was won by W. Roberts, of Nevadaville, with 17 5-16 inches; Mr. F. Gerardi being second, with 14 9-16 inches.

Mr. Ray Stout and bride returned home on Sunday evening from their wedding trip, spent with relatives in Kansas, and have gone to housekeeping in their own residence, east of the depot in Black Hawk.

Striking miners at the Smuggler-Union property at Telluride attacked the men working at the mine on Wednesday, killing three miners and injuring a dozen or more. Among the killed was John Nicholson of Black Hawk, and Charley Becker of this city, mine superintendent, had his right arm broken and badly shattered by a rifle bullet.

Mr. M. A. Arnold, formerly a school teacher in this city, has been appointed cashier of the First National Bank of Cheyenne, Wyoming.

Mr. A.C. Langford had succeeded to the business of Langford & Company, at the Black Hawk foundry.

The Technologists of Massachusetts played a game of baseball with the Star baseball club of this city, on Sunday, the score being 35 to 32, in favor of the Star club. The line-up of the latter club was Hart, catcher; Layden, pitcher; Pirongs, short stop; Frank Teats, first base; Geary, second base; Ganson, third base; Goodfellow, left field; James Gillian, center field; and Eugene Teats, right field.

END_OF_DOCUMENT_TOKEN_TO_BE_REPLACED

Benefitting the county, schools, and much more By Don Ireland   This year marks the 30th anniversary of casinos opening in the former little mining towns of Black Hawk, Central City and Cripple Creek, Colorado. In those early years, smoking was allowed inside ... END_OF_DOCUMENT_TOKEN_TO_BE_REPLACED