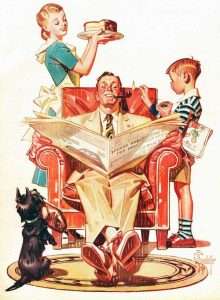 Next time you’re in the Mermaid Café, take a look at the collages by Jan Dal Pra. Many familiar faces and places are featured on the two collages with Black Hawk and Central City themes. Jan calls them a “must see” for nostalgia buffs, and invites locals to come take a look to see if they can spot themselves.

Married: Juliette Rose Hidahl and Richard Leo Theirry are going to be married this evening in The Teller House Gardens. The couple has been engaged since November of 1990 and hope to make Central City their home. Juliette is Central City administrator Jack Hidahl’s sister. The bride’s dress is a reproduction of an 1893 gown made of pink moire taffeta with ecru lace. The reception will follow the wedding ceremony and will be held at the Eureka ballroom. Music will be provided by the Alfred E. Packer Jazz Band.

Died: Jasper Donald Smith, 81, longtime resident of Central City, passed away at his home on June 13th, 1991, after suffering a massive heart attack. Born July 28th, 1911, in Forest City, Iowa, he was the son of Calvin E. Smith and Flossie M. (Grove) Smith. He graduated from Iowa State University in Ames, Iowa, in 1948, with a degree in vocational agriculture. He served in the Navy as a pharmacist’s mate and surgical assistant on hospital ships in the Pacific during World War II. Smith was a teacher at Jefferson High School in Jefferson, Iowa, until his retirement in 1961. On November 8th, 1947, he married Evelyn “Jackie” Agard in Des Moines, Iowa. The couple moved to Central City in September 1962. The couple both worked for Earl Persons at the Toll Gate Saloon. Jasper worked at the Black Forest Inn in Black Hawk for 29 years. For many years he served as the county Veterans Service Officer. He was a lifetime member of the Black Hawk VFW, American Legion Post #166, and Elks Lodge #557. He was preceded in death by his wife in December of 1986. Jasper is survived by his son, Howard (Curly) Smith of Central City; his sisters Leota Creger of Des Moines, Iowa, and Evelyn Schleusener of Marathon, Iowa; six grandchildren, eight great-grandchildren, and one great-great-granddaughter. Services were arranged by Hennigan Funeral Services in Idaho Springs. Smith was cremated. Graveside services were held at Bald Mountain Cemetery on June 17. The VFW, Elks, and American Legion officiated.

The carriage weight, used 50 years ago in being fastened to the bridle or halter of a horse or team when unattended, and weighing about 75 pounds which was used as a door stop at the Teller House Bar, was stolen last Saturday night apparently by people who desired it for an antique, and perhaps by this time it is resting comfortably in some rock garden in one of the Eastern states. However, the Teller House has obtained another one, which they hope will rest undisturbed at least for this summer.

Dr. Ben H. Christner, a former Pastor of St. James Methodist Church, will occupy the pulpit at the church, Sunday, July 2, at 11:00 a.m. Dr. Christner is now Executive Director of a Methodist Home in Boulder caring for retired people. Homecoming services will be held at the church Sunday, July 9th.

Morgan Gray told us yesterday that his father, Frank, who underwent surgery at St. Luke’s Hospital in Denver the first of the week, is recovering slowly, which is pleasing news to his many friends here.

A complete list of donors to Opera Festival Day will be printed as soon as possible. The Finance Committee is holding up the list to allow all pledges to come in and to allow additional donations.

Married: Into the long chain of marriage was forged another link Saturday evening when a young couple took the binding vows in the old City Hall. William Gerald Goodge of Denver, took as his wife Barbara Ann Beal, also of Denver. Administering the vows was Justice of the Peace Pete E. Redmond. After the ceremony this question was asked Justice Redmond. How does it feel to perform a marriage? The reply: “It gives me the guilty feelings of an executioner coupled with the gleeful feelings of a past victim gaining revenge.”

John Schopflin, a former resident near Wiggins, Colorado, but now in California, has confessed to the murder of Enid Marriott, the Wiggins school teacher whose body was found in an irrigation ditch near there some time ago. He said the only reason he had for killing her was that she had been talking about him. The sheriff at Fort Morgan has gone after the murderer, and he will go on trial for his life there, at the September term of the district court, if he is not strung up on some telephone pole before that time.

Died: At the Thomas Belcher ranch, near Black Hawk, June 22nd, 1931, Mrs. Ellen Reseigh, aged 79 years, 1 month and 1 day. Deceased came to Colorado with her husband in 1890, and located on a ranch on Bald Mountain, where they resided until the death of her husband, in 1910, when she sold the property and moved to Central City and has made this city her home ever since. Of late years she has been suffering from the infirmities of old age, and a few weeks ago, went out to Mr. Belcher’s ranch to recuperate, where she died on Monday last. Mrs. Reseigh was a member of the M.E. Church of Nevadaville and this city, a devout Christian, of a sweet and lovable disposition; she made friends of everyone who met her, who will ever cherish her memory. She is survived by her daughter, Mrs. Sarah Stevens, of Golden, and four grandchildren. Funeral services were held yesterday afternoon at the M.E. Church in this city, with interment in Bald Mountain Cemetery, by the side of her husband and son.

Mr. W. E. Stephens and family, after a several weeks’ vacation spent with relatives in Michigan and Iowa, returned to Central City Friday evening, and has resumed his duties as manager of the local telephone station.

Mrs. G.M. Laird and children, left for Denver on a visit of a couple of months with relatives.

Harper M. Orahood came up from Denver the first of the week to attend the June session of the district court.

Master Guy M. Laird, of this city, who is a member of the drum corps of the Manual Training School of Denver, was among the members promoted at the disbandment of the cadets when they returned from their outing at Idaho Springs, and has been made first sergeant in the drum corps.

Marshal Robert Wilkinson went through the various flumes of the city the first of the week and found them in good shape to withstand any reasonable flood that may strike this section during the coming months.

Just as the passenger train was ready to pull out from the depot in this city on Sunday morning, for Denver, two Italians came running up the track and told Engineer Bristol that the roadbed just beyond the Packard Gulch bridge had caved in, and that it was impossible for the train to pass over. The conductor and crew boarded the engine which was ran down to the Next President Mine, on the east edge of the bridge, where it was seen that a cave-in had occurred in the mine, which crosses under the railroad track, and the roadbed for some 15 or 20 feet had dropped out, leaving the ties and rails in a seemingly solid condition, and had not the warning been received and the train started on its journey to Black Hawk, there would have been a serious wreck, as it would have been impossible for Engineer Bristol to have seen the cave-in until too late to stop the train.

Gus Cessario, of Nevadaville, left for Denver Tuesday, with his brother, Tony, at St. Anthony’s Hospital. The doctors have decided that an amputation of the foot is necessary to save his life, and the operation is expected to take place on Friday.

Some of our industrious youngsters are picking over dumps during vacation and are making very fair pay for their labor. At least one fellow has, as during the past week he received for his ore the sum of $108, for three weeks’ work, after paying royalty of 30 percent. The shipment was a little over 2 tons, and the ore came from one of the dumps in Russell District. The youngster averaged $36 per week, or $6 per day for his labor, which is above the average day’s pay of the camp. Such good ore is not found on every dump, although within a short distance of the above property, another party picked a dump and shipped ore that went 7 ounces gold to the ton.

Rev. V.E. Kaltz, of Idaho Springs, officiated at the M.E. Church in this city on Sunday.

Joseph Collier and family, from Inverness, Scotland, arrived in Central City on Sunday, and were the guests of Mr. David C. Collier, one of the proprietors of the Miners-Register, and family.

Miss S. Tucker and G.A. Shandstrom of Nevada, and W.H. Salisbury, of Central, were visitors to Idaho Springs on Saturday.

The town hall at Idaho Springs, being built by H. and J.D. Barnes, was fast approaching completion.

Mr. Thomas Mullen, of this city, had received the contract for grading for the foundation for the new hotel to be known as the Teller House.

END_OF_DOCUMENT_TOKEN_TO_BE_REPLACED

Where the dead get to tell their story By Jaclyn Schrock On Saturday, August 21, the Gilpin Historical Society held their annual Cemetery Crawl. Tickets allowed the shuttle of hundreds of guests from the Teller House parking lot to the Cemetery. Depending on v... END_OF_DOCUMENT_TOKEN_TO_BE_REPLACED